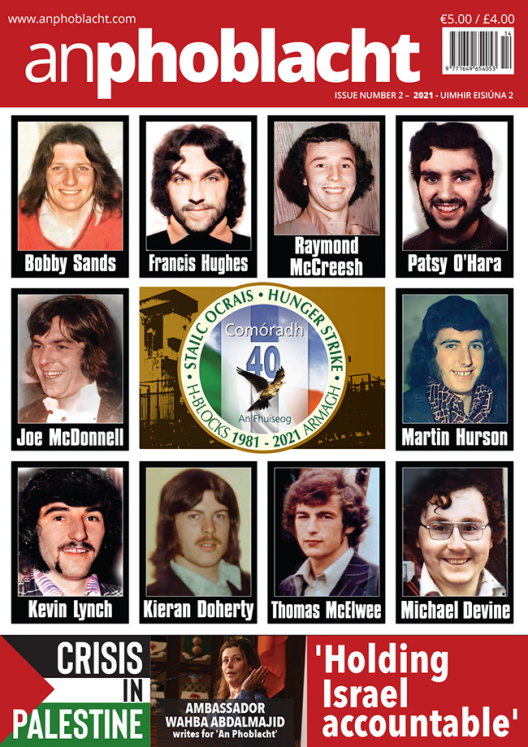 1981 was a pivotal year in the history of modern Irish republican struggle. More than a decade after the maelstrom years of the civil rights movement, the pogroms of 1969, and the collapse of one party unionism, Irish republicans were under siege on many fronts. Free article

An inhuman assault on innocent people

In March, Tánaiste Leo Varadkar celebrated the South’s 3.4% GDP growth, stating that we’re “the only economy in the European Union, and one of the few economies in the world, which actually grew last year”. In fact, we were the fastest growing economy in the world. Free article

Saying 'No' to the low wage precarious economy

The workers’ voice is central in shaping a new Ireland

Writing in a personal capacity, ICTU president and the Northern Secretary of the Irish National Teachers’ Organisation Gerry Murphy outlines the mission of Trade Unionists for a New and United Ireland. Free article

Time for confident leaders and pride of place

We live in a place unrecognisable from 23 years ago, where the passage of time is only just beginning to heal the hurt and repair the damage. A country where a new generation of young people untainted and often unfamiliar with the past grow up with the same hopes, dreams, and aspirations of their peers in the Republic of Ireland or in Great Britain. A generation of young people who are our greatest asset and our greatest opportunity. Free article

A year of worker resistance at Debenhams

One year ago, when many of us were facing into COVID lockdown, Debenhams workers faced a real David and Goliath struggle. Free article

The power of art

Lee Hamill makes the case for the artist as a revolutionary activist who is in a unique position to facilitate the conversation on the nuts and bolts of what unity will look like, addressing the systemic inequalities in Irish society and the transformative impact that unity could have Free article

The Road to Partition

Time to build a new Ireland, one without walls

The power of change is in our hands