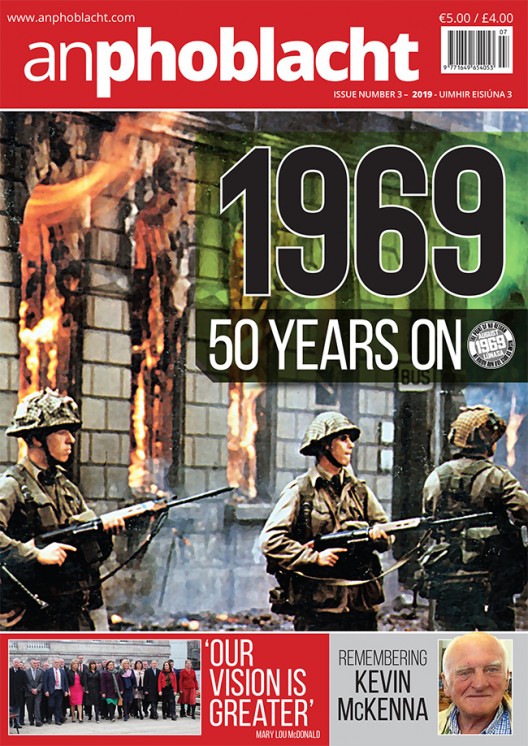 In the aftermath of the EU and local elections across Ireland it is necessary and right to take stock and analyse the Sinn Féin performance. However, in this month of August 2019, there is a need to look also at the road republican activists have travelled over a much longer arc of history. Free article

Where now for Sinn Féin?

After a decade of election growth, the Local and European results in the south were disappointing. I want to pay tribute to all the candidates and activists who put in the long hours and the hard yards. Due to your work Sinn Féin is the third largest party in the 26 Counties, the second largest party across the island and the largest party organised on an all-Ireland basis. This is some achievement in just a few short decades. Free article

Only Sinn Féin can deliver Irish unity and a new republic

It is impossible to pinpoint any one reason why Sinn Féin had poor European and local elections. With hindsight, we need to admit that we didn’t consolidate the 2014 election bounce, and the intake of newly elected councillors. Free article

Grace McManus has worked as an advisor with the Sinn Féin Seanad team for over two years, and was elected in the Bray East area in the last local elections. Here she gives an insight into the working life of a new Sinn Féin councillor. Free article

A Just Transition to a Green Economy

Building the green economy, reskilling and upskilling workers, investing in biogas and biomass energy and retrofitting homes across Ireland are just some of the proposals Sinn Féin has made to deliver action on tackling climate change. This comes after two radical climate change bills have been introduced by the party on solar panels and micro generation. As Sinn Féin’s David Cullinane takes on the Climate Change portfolio, Brian Stanley td outlines the critical work done so far on this issue. Free article

The takeover of the Tory government by hard right Brexiteers led by Boris Johnson has deepened both the Brexit impasse and the difficulties in restoring the Executive and Assembly in the Six Counties. The new regime was only a few days in office when there was talk of full direct rule being imposed in the event of a no-deal Brexit, a development that would fundamentally undermine the Good Friday Agreement. Free article

Any language is an arena of struggle

Late last year Ngũgĩ wa Thiong’o spoke at the LÍON, Limerick and Languages: Revival, resurgence and new beginnings conference in Mary Immaculate College, an event organized as part of Bliain na Gaeilge. Luke Callinan of An Phoblacht spoke to Ngũgĩ about the importance of language and culture in the context of a struggle for national liberation and self-determination. Free article

Time to get behind the campaign for a four-day week

Melbourne’s eight-hour day monument stands opposite the Trades Hall – reputedly the oldest trade union building in the world. I found myself there tracing the footsteps of my granduncle Gus, a trade union activist in the city from the 1930s to 1960s. The monument honours the world’s first successful battle to secure an eight-hour working day in 1856. Its design symbolises the demand, first associated with textile manufacturer and social reformer Robert Owen, for “Eight hours labour. Eight hours recreation. Eight hours rest.” Free article

Sinn Féin Senator Paul Gavan’s Protection of Employee Tips Bill has won majority support in the Seanad and Dáil, despite the attempts of Fine Gael to undermine the legislation, which now heads back to committee stage. SIPTU Organiser Clement Shevlin, outlines the origins of the bill and the work of the One Galway movement campaigning for hospitality workers’ rights. Free article

Kevin McKenna was a quiet and unassuming man to meet. He was also a man who displayed huge strength of character, determination, personal courage, leadership and political wisdom at times of great challenge in our country’s history. Born into a farming family in Co Tyrone on 20th July 1944, Kevin McKenna grew up in the Brantry at a time when nationalists in the North of Ireland were treated as second-class citizens and the Orange state faced little effective challenge. Free article

The end of the Orange State

In the tumultuous world of the late 1960s, Ireland became briefly the centre of international media attention. The resistance of nationalist communities to brutal systematic attacks on their communities demonstrated a new generation of risen people. While the centre of the disturbances were in Belfast and Derry principally, there were incidences recorded across the Six Counties including Armagh, Coalisland, Crossmaglen, Dungannon, Dungiven, Newry and Strabane. The first deaths of the conflict which began in 1969 took place that July - Sammy Devenny and Francis McCloskey, both Catholics killed by the RUC. Free article

A turning point in our lives

Why is it that the older we get the drier and hotter were the summers of our youth as they replay in our memories. The summer of 1969 is like that. I was 16. Along with my brother Seany, who was 15, and a bunch of our friends, our social life centred around St Teresa’s Youth club on the Glen Road in Andersonstown. Free article

1969 was a popular uprising

In the affairs of life there is always a ‘defining’ point where transformation begins; it can be a year, a moment, an event or a series of events but fundamental change is invariably the outcome. Free article