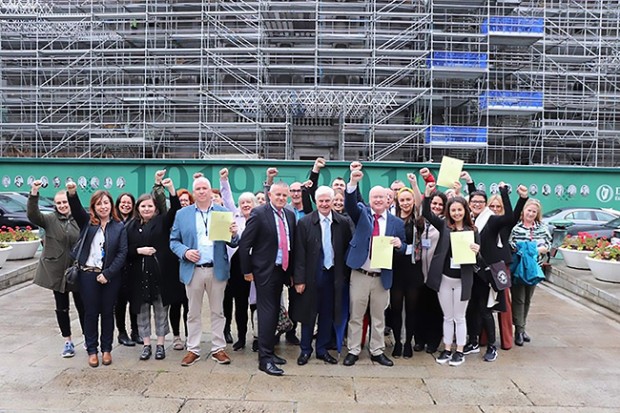 It was November 2018 when the ONE Galway movement decided to weigh-in on the controversial tipping scandal and take to the streets to lend their support to hospitality workers.

Shortly after their establishment in 2017, ONE Galway began working closely with the Galway Hospitality Group, a grassroots group of activists and academics working to highlight the immense levels of exploitation and precariousness in the sector. It was to their research with hospitality workers that Senator Paul Gavan referenced when drafting his Bill, National Minimum Wage (Protection of Employee Tips) Bill 2017.

Contrary to the government’s spin, the premise of the Tips Bill is to give hospitality workers a right to their tips and to require restaurants to display their tipping policy clearly for customers to see.

The ONE Galway movement’s campaign, to highlight the malpractice and misadministration of tips then focussed around this Bill. The movement, comprising of trade unions, student unions, academics, and community groups, embraced the opportunity to work with a broad grouping of progressive politicians who wish to eradicate injustices for workers and ensure they and their families have access to decent work and living standards.

In December the ONE Galway group of activists began engaging with the public in Galway to highlight the levels of exploitation in the sector. The campaign asked diners to simply check with waiting staff when eating out, and ask “Where do your tips go?”

A pretty simple ask but which received a significantly positive response both from the public and from the media. While people were appalled that tips were taken by employers, one third of workers indicate they receive none of their tips, they were particularly glad that the trade union movement was taking action on this issue. The campaign, targeting Christmas party diners, also caught the attention of the media and featured heavily on news programmes on RTE and TG4.

With the level of interest and goodwill generated towards the campaign, Senator Paul Gavan and Sinn Féin agreed to put the Bill into the Seanad in February 2019.

ONE Galway now focussed their on-street campaign around Valentine’s Day and began lobbying Senators and local politicians to ensure the Bill successfully passed through the various stages. 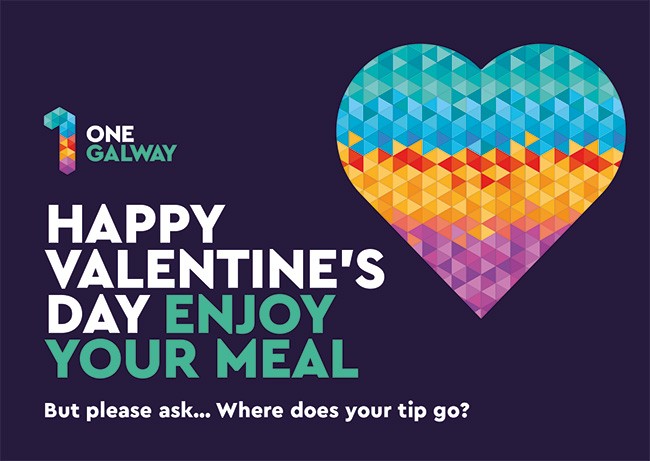 During this period ONE Galway made several attempts to meet with Employment Affairs Minister Regina Doherty, but to no avail as it was clear she was only interested in working with the employers, meeting with them several times. Doherty fully endorsed the campaign by the Restaurant Association which circulated a sticker to members for display which “guaranteed” transparency in tipping without any evidence or criteria attached.

The Minister also instructed Fine Gael Senators to vote against the bill as it “may lead to unintended consequences”, preferring to establish a “collective agreement” with employers to the exclusion of workers and their representatives.

At this time Minister Doherty also suggested the government was preparing their own legislation which would amend the Payment of Wages Act. However, this new legislation would not address the principal issue which gives workers ownership of their tips, but will instead only outlaw the top-up of contracted wage rates with tips, which is just one form of malpractice in this area.

The government approach is clearly in line with the demands from the Restaurant Association of Ireland (RAI) who wish to retain access to tips which they estimate make up approximately 10% of their revenue, a claim made on air by the CEO of the RAI Adrian Cummins.

On February 20th, the Bill passed through Committee stage and following a mammoth lobbying task in the intervening period, including a video vox-pop on the Bill filmed in the minister’s own constituency, it successfully passed through the Seanad winning cross-party support on June 12th.

The ONE Galway lobby machine now went into overdrive, as the Bill was rushed to the Dáil and scheduled for debate a mere five days later on Tuesday June 18th. Using every available resource, contact and network available across the trade union movement we found that the same cross-party support existed in the Dáil chamber.

On the evening of June 18th, a group of activists from across the country which included trade unionists, hospitality workers, student union activists and community organisers gathered in the Dáil chamber to listen to Deputies debate and outline the precarious and exploitative nature of work in the hospitality sector. It was heartening to know that, with the exception of Fine Gael and Deputy Mattie McGrath opposing the Bill, the majority of those representing us in the Dáil retain some concern for, and wish to strengthen the rights of low-paid workers.

Many Deputies who spoke in favour of the Bill expressed a view that it will not, as continuously suggested by the Government, change in any way the current tax treatment of tips. They also spoke about how it will be a positive action by the Oireachtas to improve conditions for such low-paid workers. With the Government being so vehemently opposed to this Bill they then chose to attach a “money message” to it, which if agreed, will effectively delay its progress indefinitely. 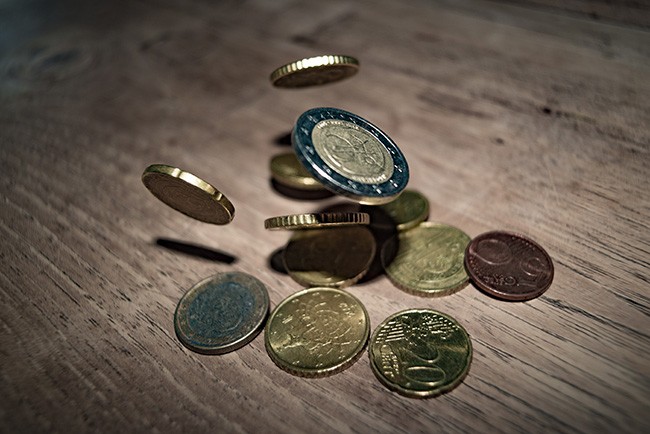 However, as expected the Bill successfully passed this stage of the Dáil on Thursday 20th June, 75 to 41 votes, a result welcomed by thousands of struggling hospitality workers.

But it is not over yet, the Bill which is due to move to Committee stage, may now be subject to a money message which will require another round of engagement, lobbying and discussion with politicians, across the political divide.

Fiona Dunne, National Coordinator for the ONE Movement said “the alliances formed through this campaign proves that if those who hold the same principled position of fairness and equality really want to fight for the rights and interests of ordinary workers and their families, they must work together, casting aside political or other differences, and instead focussing on the issue at hand in order to achieve much more for the most vulnerable in our society.

ONE Galway and ONE Cork will continue to campaign and lobby on this issue until the law has changed and hospitality workers access the money originally intended for their pockets. The ONE Galway has learned a lot over the last year on the power of collective lobbying and the effectiveness of having a national network.

At each stage so far, Senators and TDs would have received emails, letters and phone calls from Trade Councils, District Councils, third level students, second level students and workers from the sector.

In certain key constituencies, District Councils demanded an emergency meeting with their local TD to ensure they would support the Bill. The ONE movement is all about a collective fight on precarious work, precarious work leads into precarious lives which is having a devastating effect on society and we have to challenge that together. When hard working genuine politicians like Sinn Féin Senator Paul Gavan take on a cause for the ordinary worker, it’s imperative that we roll right in behind them with all the resources and networks we have and this we will continue to build on.

• For more information on the One Movement go to: www.onemovement.work or catch up with all them on

Facebook under ONEGalway. You can email them at: [email protected]

• Clement Shevlin, is a SIPTU Organiser based in Galway