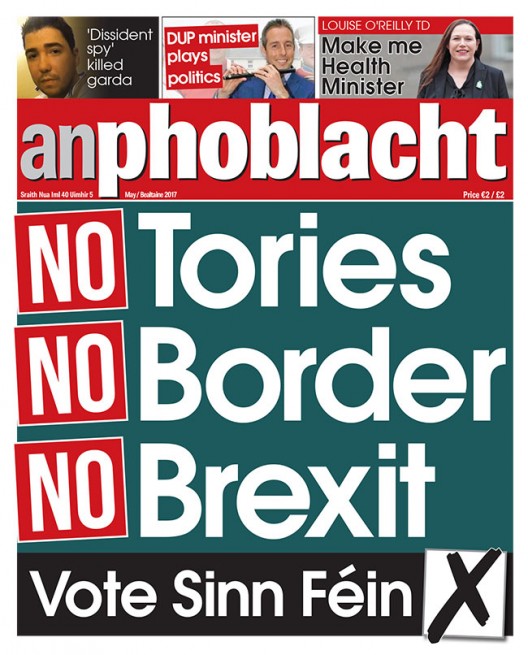 THE TORIES’ DISREGARD for the people of the North of Ireland – unionist and nationalist – was shown in Prime Minister Theresa May’s shock announcement of an early Westminster general election after her categorically ruling it out only a few weeks ago. Free article

June 8 – Vote for equality and against Brexit

VOTERS in the North are set to go to the polls once again after the British Tory Prime Minister Theresa May called a snap election for 8 June to elect MPs to Westminster. Free article

May is 'Green Ribbon Month'

MAY is “Green Ribbon Month”. This worthy campaign run by SeeChange aims to get people talking about mental health problems. Free article

ON 11 OCTOBER 2015, Adrian Crevan Mackin shot dead Garda Tony Golden and seriously wounded Siobhán Phillips before taking his own life near Omeath, County Louth. New evidence shows that Adrian Crevan Mackin was a Garda agent and informer, tasked with infiltrating so-called dissident republican groupings. He was out on bail at the time of the murder even though he had admitted possessing weapons and explosives. Free article

LOUISE O’REILLY TD is straight talking, as Fianna Fáil TD Niall Collins (among others) has found out the hard way during a Dáil debate on workers' rights when she tore him off a strip for heckling her in a video moment that went viral. Free article

FIANNA FÁIL have given the go-ahead for water charges through the back door despite the party pledging in its 2016 Dáil election manifesto to completely scrap the unpopular measure and Irish Water. Free article

A SCHEME set up by Arlene Foster’s Democratic Unionist Party “to improve community halls” saw the bulk of a £2million fund being spent on Orange Order halls and has been found to be biased towards Protestant and unionist groups, according to official departmental documentation uncovered by the Committee on the Administration of Justice (CAJ). Free article

Varadkar’s nasty and divisive ‘dole cheat’ campaign is a fraud

LEO VARADKAR is “getting tough on dole spongers”. He has just launched a high-profile and hard-hitting campaign to root our social welfare fraud. Free article

Stormont: The end of an era – the beginning of another

WHEN Martin McGuinness resigned as deputy First Minister he stated: “There will be no return to the status quo.” I doubt if even Martin had at that time foreseen the significance of those words. They signalled the end of an era. Free article

The first casualty of tax evasion

THE FIRST CASUALTY of tax evasion is the truth. Let me give you an example. On 30 August 2016, an EU Commission investigation found that Ireland had breached state aid procedures by deliberately and artificially lowering the corporate tax rate paid by Apple. Free article

Can the Border be moved to the Irish Sea?

WE SEEM TO BE living in a state of suspended political animation at the moment, with the Government (and its pseudo-opposition in Fianna Fáil) mouthing the correct platitudes against a hard Border and the rest but giving no substance as what it is looking for or the context of negotiations as the Irish Government sees them. Free article

Building a mass political movement for positive change across this island

LIKE THOSE in Dublin in Easter 1916 who rose against the British Empire and proclaimed the Irish Republic, the men and women of Tyrone and other parts of the North of our generation took on the formidable military might of the British state after the pogroms of 1969. Free article