Varadkar’s nasty and divisive ‘dole cheat’ campaign is a fraud 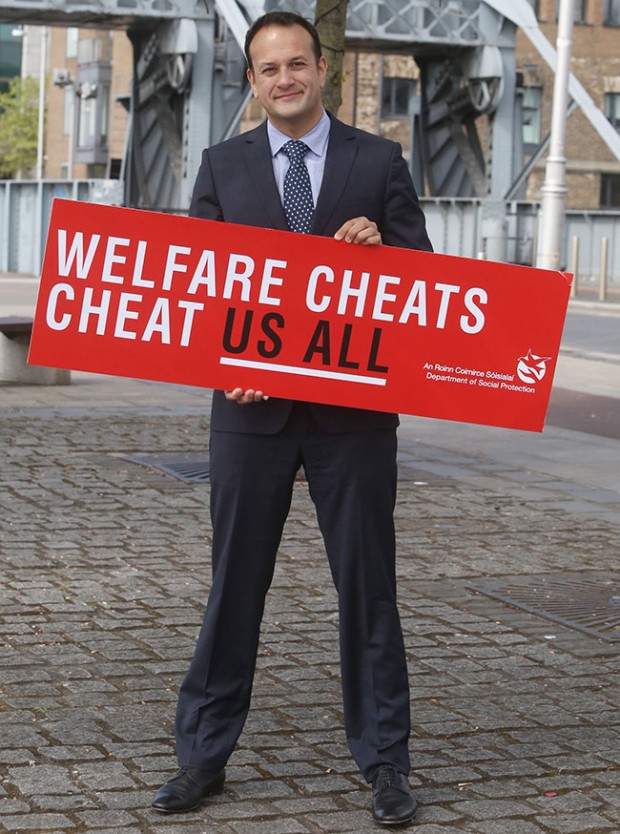 Not only are errors more frequent than fraud in our social welfare system, they are also costing the taxpayer more

LEO VARADKAR is “getting tough on dole spongers”. He has just launched a high-profile and hard-hitting campaign to root our social welfare fraud.

He claimed that “anti-fraud and control measures” saved the taxpayer over €500million in 2016. No detail explaining or justifying this figure was provided. Requests to the Department of Social Protection for additional information didn’t help much.

But something just doesn’t add up.

In the absence of any clarity from the minister, one has to trawl through the Department of Social Protection's Fraud and Error Surveys, the annual Comptroller & Auditor General reports and Parliamentary Questions to get some answers.

Under their Compliance & Anti-Fraud Strategy, the Department of Social Protection conducts two surveys of specific social welfare payments every year. They select a random sample, review the claims and identify possible fraud, error or change of circumstance.

The 2014 report into Job Seeker’s Allowance revealed that 2% of claims representing 1.4% of expenditure were fraudulent. The report also found that 11% of claims were receiving an overpayment due to client or department error amounting to 1.7% of expenditure.

The 2012 Comptroller & Auditor General Report surveyed irregularities in social welfare payments over a number of years and found similarly low levels of fraud.

The report concluded that fraud in Jobseeker’s Benefit amounted to 0.1%, Child Benefit to 0.5%, Disability Allowance to 2.1% and One Parent Family Payment to 6.7%.

In 2013, the Comptroller & Auditor General Annual Report included a section on “Welfare Overpayment Debt”. The report concluded that, from 2007 to 2011, 50% of all overpayments were due to error (44% from the client and 6% from the department), while 38% of overpayments was due to fraud.

The conclusion to be drawn from figures is that the number of fraudulent claims is small and that overpayments due to errors by claimants or department staff are more significant.

The big question, of course, is how much does this cost the taxpayer?

So not only are errors more frequent than fraud in our social welfare system, they are also costing the taxpayer more.

What is not clear from any of the above data is where Minister Varadkar is getting his claim that €500million was saved from anti-fraud and other control measures in 2016.

This figure is clearly not the actual amount of money saved from identifying overpayments. Nor does it bear any relation to actual incidents of fraud in 2016.

But who cares? It makes for a good headline when launching a campaign to tackle one of society’s big problems . . . Except that on the basis of the department’s own figures, social welfare fraud isn’t such a big problem and certainly not bigger than the issue of overpayment due to errors. Indeed, the level of detection and recovery by the department is pretty impressive.

Unfortunately, launching a campaign to root out errors rather than fraudsters just doesn’t grab as many headlines. Likewise, announcing extra staff to identify and recover overpayments from whatever source is not a big news story.

If Minister Varadkar was serious about tackling overpayments (and he should be) he would focus on errors as much as fraud and invest resources in the staff to deal with this.

But Leo’s focus is not social welfare overpayments. His eye is firmly fixed on the leadership of Fine Gael and the office of Taoiseach. To get what he wants he desperately needs headlines.

He wants to give the impression that he is taking a stand against welfare scroungers who pay for nothing and expect everything for free.

What he is really doing is wasting taxpayers’ money to stoke up prejudice and ignorance rather than investing that money in tackling the real problem.

This is right-wing Thatcherism at its very worst.

It is a mean-spirited approach which seeks to pit communities and individuals against each other for narrow personal political gain.

If this is the height of Leo Varadkar’s vision, then maybe Enda Kenny should hang around until we can put them out of power in a Dáil election.