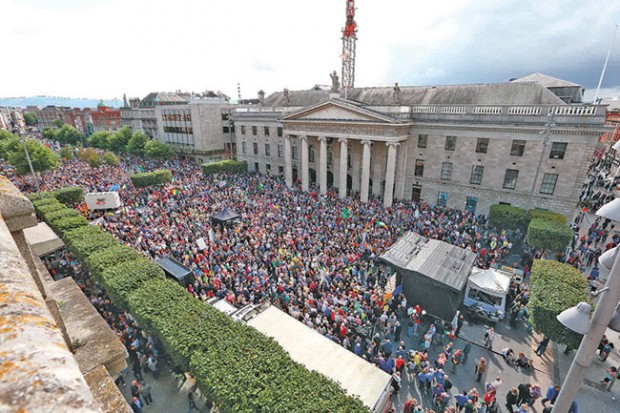 • While the Oireachtas Water Committee’s report was not a complete success, the Right2Water campaign could rightly be proud of the impact it has made on the debate, Sinn Féin TD Eoin Ó Broin said

FIANNA FÁIL have given the go-ahead for water charges through the back door despite the party pledging in its 2016 Dáil election manifesto to completely scrap the unpopular measure and Irish Water.

The Fianna Fáil retreat at the Oireachtas Water Committee came only days after sabre-rattling from the party’s Local Government spokesperson, Barry Cowen, who threatened a snap election if Fianna Fáil didn’t get their way.

The party also waited until after tens of thousands of people had marched through the centre of Dublin again as part of the Right2Water campaign – many believing that water charges were on the way out – to announce their capitulation. Organisers at the march prophetically warned activists that the campaign to end water charges was far from over.

The first was on the continued installation of water meters in new-builds while the second will see a volumetric charge for “excessive” domestic usage of water. These two issues are seen as of high importance to Fine Gael who have been insistent on not shutting the door completely to water charges further down the road. Fine Gael still want to bring in water charges at a later date but Chief Whip Regina Doherty conceded that this attempt had been a “cock-up” and a “catastrophe”. 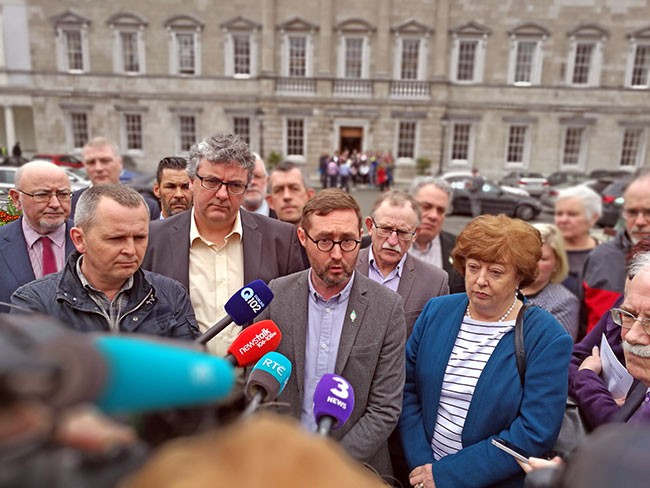 “Fianna Fáil have flip-flopped once again. They use their political strength to face down and thwart the will of the people. Fianna Fáil show once again that they cannot be trusted.”

She said it was typical of the type of “cute hoor” politics the public has come to expect from the party who laid the groundwork for the charges.

“There’s nothing new about what happened,” she said. “It’s been happening for decades: the ordinary people get screwed by Fine Gael and Fianna Fáil.”

Enda Kenny was quick to jump to the defence of Fianna Fáil. He claimed that they had “the courage to come to a conclusion in the interest of the country and move on”.

Sinn Féin’s spokesperson on Water, Eoin Ó Broin, said that while the Oireachtas Water Committee’s report was not a complete success, the Right2Water campaign could rightly be proud of the impact it has made on the debate:

“The principle that domestic water services should be funded through general taxation and Government borrowing has been accepted. Denis O’Brien’s metering programme has been stopped in its tracks.

“People who were bullied into paying will get refunds. People in group-water schemes will finally be treated equally. And, crucially, a referendum enshrining the public ownership of water and water services in the Constitution has been promised. None of this would have happened without the Right2Water movement.” 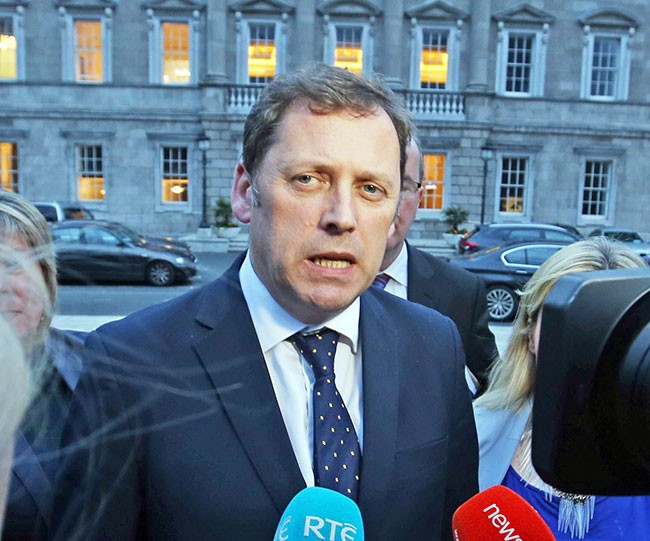 In a statement, the Right2Water movement said that, had it not been for people power, household bills “would be in four figures” already.

“The people won, for now, on general taxation,” it said, though it warned: “But, like the bin charges, the Government are going to spend years trying to roll back on this. We at Right2Water are not happy with this outcome as there is more to do. But remember what has been achieved. Remember where we were, and how hopeless it was three short years ago. And remember also that this is very far away from what Fine Gael, Fianna Fáil, Irish Water and, most of all, the Labour Party – who did most to try to commodify our human right to water – wanted to do to us.”

Eoin Ó Broin warned the right-wing parties that the Right2Water movement will continue to hold Fianna Fáil and Fine Gael accountable on this issue:

“Any attempt to use the room granted by Fianna Fáil to introduce water charges through the back door will be met with the same mass campaign that dogged the previous Government. We will be watching the progress of the legislation arising from the Water Committee’s report very closely.”