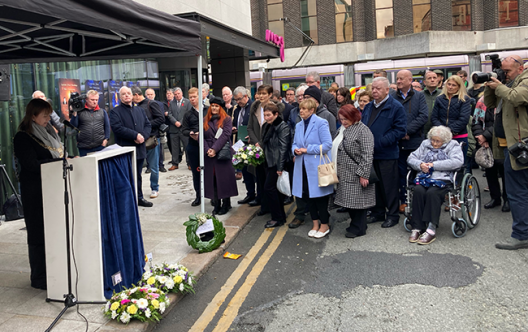 The 50th anniversary of the deaths of three Dublin bus workers was marked in the city on 1 December, the date on which Tommy Duffy and George Bradshaw were killed in Sackville Place off O’Connell Street. Tommy Douglas was killed in the same place on 20 January 1973. Free article

THE death of IRA Volunteer Martin Hurson on 13 July 1981, after 46 days on the Hunger Strike, was unexpected. The suddenness of his death, coming only five days after that of Joe McDonnell, came as a shock since two other Hunger Strikers – Kieran Doherty and Kevin Lynch – had been almost a week on hunger strike ahead of Martin. Free article

Republicans from Dublin and Belfast were among the hundreds of who attended the funeral of Josie Sheppard of Donaghmede, Dublin, on 7 July. Free article

It was with some sadness that the republican family in Dublin, Derry, Donegal and further afield learned of the death of James Hazlett in the early hours of Saturday morning, 25 June 2022, aged 71. Free article

JOE McDONNELL was the fifth Hunger Striker to die due to the intransigence of British Prime Minister Margaret Thatcher and her government. Free article

Republicans across Ireland were saddened to hear of the death of Tina Shannon last week. Many travelled to her funeral in Dublin where Eamonn Nolan gave the graveside oration for a remarkable and courageous republican activist. Free article

Centenary of the death of Cathal Brugha

ONE of the first leaders of the Irish people to lose his life in the Civil War in 1922 was Cathal Brugha TD who for many years had been a key figure in the IRA, Sinn Féin and Conradh na Gaeilge. Free article

Republicans in Antrim recently marked the centenaries of volunteers killed in Cushendall and Glenariffe. Sinn Féin MLA Pat Sheehan was the speaker and told those assembled that the executed volunteers and “all their comrades 100 years ago opposed the undemocratic, unjust, and sectarian partitioning of our country”. Free article

Protest against Bill of Shame at British Embassy

Relatives of those killed in the bombings of Dublin, Monaghan and Castleblayney joined a protest against what has been dubbed the Bill of Shame at the British Embassy in Dublin on 28 June. Free article

The threat of renewed war made by the British government at the end of the Treaty negotiations was finally carried out on 28 June 1922 but it was the Provisional Government of the Free State that started the threatened war using borrowed British guns. Free article