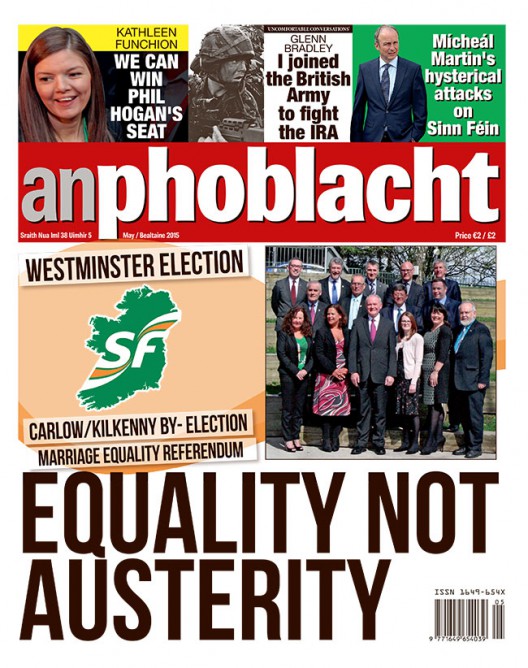 THE SPECIAL ‘May Day Conference’ on Friday 1 May and Saturday 2 May convened by the five trade unions affiliated to the Right2Water campaign to discuss a set of core principles which will underpin a ‘Platform for Renewal’ in advance of the next general election is being supported by Sinn Féin. Free article

“TALK IS CHEAP, and that’s all we’ve gotten from this Government in terms of workers’ rights,” says Senator David Cullinane speaking to reporters at the launch of Sinn Féin’s For Decent Work and a Living Wage document in Dublin. Free article

A MARRIAGE EQUALITY proposal tabled by Sinn Féin at the Stormont Assembly on 27 April was defeated 47-49 due to almost total unionist opposition. The measure also faced a blocking move through a Petition of Concern by the Democratic Unionist Party. Free article

THE FAMILY of Patrick Heenan, murdered by British state agents within the unionist Ulster Defence Association on 1 February 1973 in east Belfast, have travelled to London with Relatives for Justice and solicitors KRW Law to issue legal proceedings against the Ministry of Defence and retired British Army Commander-in-Chief Frank Kitson. Free article

THE Westminster election campaign goes down to the wire with canvass teams knocking doors across all 18 of the North's constituencies right up until polling day on 7 May. Free article

SINN FÉIN is campaigning for a ‘Yes’ vote in both referendums which will be put to the people of the state on 22 May. Free article

A decade of broken promises

THE WELLINGTON MONUMENT in Dublin’s Phoenix Park looms over the rooftops of nearby houses and blocks of flats in O’Devaney Gardens. O'Devaney was built in the 1950s as one of a number of social housing projects to rehome families during Dublin Corporation’s programme of slum and tenement clearances. It was named after Bishop Conor O’Devaney, a friend of Tyrone’s rebel chief, Hugh O’Neill, who was hanged at nearby Arbour Hill by the British in 1612 for treason, aged at least 80. Premium service article

‘The people of the Colin are coming home’