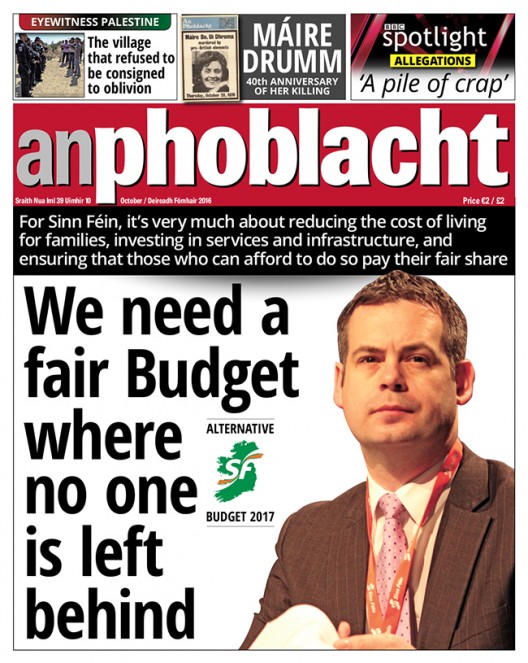 2017 must be a year of change. Budget 2017 should reflect a commitment to change. Free article

Beyond the Alternative Budget

ENDA KENNY and Mícheál Martin’s staunch opposition to the European Commission’s Apple tax ruling is not about protecting their reputations. Nor it it about defending the state’s 12.5% Corporation Tax rate. Free article

DID the North’s largest unionist party, the DUP, have their fingers crossed behind their backs when they signed up to the Programme for Government with Sinn Féin? Free article

MÁIRE DRUMM might be best known to younger generations for the way in which she died but it is more important to remember how she lived – as a leader of women, a leader of men, a revolutionary, a wife, a mother and a grandmother. She was a formidable force. Free article

FOR the past few years, a number of Sinn Féin members have been involved in what has become known as ‘Uncomfortable Conversations’ – outreach and dialogue with members of the unionist community alongside outreach to other sectors of society, including politicians and members of church and civic society, mainly here in the North. Free article

AS Sinn Féin continues with the pursuit of ‘Uncomfortable Conversations’ on the issue of reconciliation, there is a sense of frustration from some within the broad republican family at the lack of – or maybe better to say, absence – of any reciprocation or even acknowledgement from political unionism of the efforts republicans see themselves as making. Free article

WHEN James Connolly warned that partition would produce a carnival of reaction, North and South, he knew that the class forces involved in the Irish fight for freedom would assert their own interests at all crisis points. Free article

Al-Araqib – The village that refuses to be consigned to oblivion

ONLY the tattered pieces of tarpaulin and broken planks of wood hint at the destruction, protruding from mounds of earth and appearing incongruous with the landscape, as though placed by a giant. Free article

The Return of Frankenstein

A CURIOUS SILENCE greeted the news on 15 September that two of the world’s largest chemical giants, Bayer AG of Germany and Monsanto of the USA, are to integrate their “chemistry, biological and data science technology platforms” in a bid to feed the ten billion people expected to need this expertise to deliver abundant crops in 2050. Free article

IT IS ESTIMATED that some 3,500 people were rounded up by the British Government after the 1916 Rising. About 1,500 were released shortly afterwards, leaving around 2,000. Of these, 160 were court-martialled; 90 were sentenced to death and 75 of these sentences were commuted to prison terms ranging from two years to life. Free article

ALL the side streets off 5th Avenue, from the 40s up to 63rd, were lined with trade union banners, trucks, floats, food stalls and (most importantly on a day when temperatures hit 98) huge barrels of ice holding bottles of water and soft drinks . Free article