Gerry Adams has told the Parades Commission that it should not permit a march by the Apprentice Boys on 14 August in north Belfast because it is a coat-trailing exercise. The Sinn Féin President has appealed to the Apprentice Boys, "in the interests of good neighbourliness and common sense, to be magnanimous and voluntarily agree to travel to Derry without walking first through a nationalist area". Free article

Ombudsman can't see the wood for the trees

For most northern nationalists, recent rulings by the Police Ombudsman are undoubtedly a case of being unable to see the wood for the trees. These are the facts. On 4 October 2002, lines of armoured vehicles drove dozens of PSNI officers dressed in a pseudo-paramilitary uniform of boiler suits and caps to the official buildings of a fledgling power-sharing Assembly. The raiding party entered the offices of government of an elected political party whose electoral rise had been on the basis of opposition to the very state the raiding party held in allegiance. This week, Police Ombudsman Nuala O'Loan published the results of her investigation into the Stormont raid. Free article

One of two healthcare workers targeted in weekend racist attacks by loyalist paramilitaries in Cullybackey, near Ballymena, says she has been persuaded to remain at her County Antrim home by neighbours who have been extremely supportive. Sma Ndaea, originally from South Africa, said she was terrified after her house was attacked as she and her four-year-old son slept upstairs. The front window of the home at Tobar Park, a loyalist housing estate, was broken in the early hours of Saturday 31 July. In a second attack on the house of an Indian work colleague of Ndaea's, a window was broken. Free article

ROBBIE SMYTH, Sinn Féin's representative on the board of InterTradeIreland, one of the all-Ireland bodies set up under the Good Friday Agreement, writes this week in a personal capacity in response to Reg Empey's call for a review of the body. Free article

Sinn Féin has severely criticised the Parades Commission for allowing a loyalist 'Kick the Pope' band to parade past Catholic homes and St Gerard's Catholic Church in North Belfast. The Whitewell Defenders Flute Band, which has UDA connections, was allowed to leave the mainly loyalist White City area, off the Whitewell Road, and parade, with 100 supporters, along the Serpentine and Antrim Roads on Friday 30 July. Free article 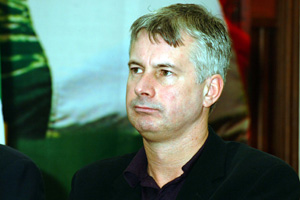 Jarvis plc, one of Britain's most controversial and now debt-ridden public private partnership contractors, has been thrown a €60 million lifeline by the Fianna Fáil/Progressive Democrats coalition.

Everything must change, Moore's the pity

Every guidebook on Dublin's attractions, every 'What to do in Ireland's capital city', carries a small section on Moore Street. Running parallel to O'Connell Street, the famous thoroughfare is one of the oldest fruit and vegetable markets in the city and is full of the cacophonous hustle and bustle that is characteristically Dublin. Free article