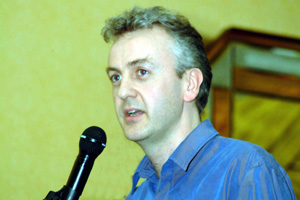 ROBBIE SMYTH, Sinn Féin's representative on the board of InterTradeIreland, one of the all-Ireland bodies set up under the Good Friday Agreement, writes this week in a personal capacity in response to Reg Empey's call for a review of the body.

What is the state of play of cross border trade? Figures released last week by InterTradeIreland, the all-Ireland body responsible for trade and business development under the Good Friday Agreement, show an increase in trade for the last two successive quarters in 2003, even though trade flows remain 20% below their pre-9/11 peak in early 2001.

Sinn Féin economy spokesperson and MP Michelle Gildernew welcomed the figures, while highlighting that "work on removing barriers to developing the all-Ireland economy needs to continue".

The UUP's Reg Empey, former Assembly Minister for Enterprise Trade and Development, took a different view. Empey has described the figures as "very disturbing" and says that "these figures raise serious questions".

Empey has also called for a review of the role of InterTradeIreland. "There is no formal agreement for a review of InterTradeIreland's performance, but there is no reason why Barry Gardiner (Labour Minister at the NIO) and Mary Harney couldn't put it on the agenda for the next meeting of the inter-ministerial group," he said. Empey believes that after five years in operation, it is a natural time to review InterTrade.

The main drivers behind this growth were chemical products, up 20.5%; other manufacturing and furniture, up 13.7% and the transport and equipment sector, which rose 11.1%.

All of these figures and trends are part of what InterTrade's strategy and policy director Aidan Gough described in the Irish News as a "weak global trading environment". There had been, according to Gough "weak demand for Irish goods from all major trading partners over the last two years". He said that "only now is it beginning to show signs of recovery". In terms of the long term picture, Gough said that "North to South trade has more than doubled in the last ten years".

Promoting North-South trade is only one element of InterTradeIreland's activities, which include creating North-South partnerships. Recently, such work included establishing Biomed Ireland, Expertise Ireland and an all-island micro enterprise committee.

In the first quarter of 2004, InterTrade was involved in starting eleven North-South partnerships and 16 all-island events, all of these things rooted in developing business on the island.

InterTradeIreland's publications and studies are providing valuable and hitherto unavailable information to businesses on the island economy. Such publications include a review of the horticulture industry, which was published earlier this year, or the ITI Guideline's for Business publications, which provide detailed information on VAT and financial incentives for businesses seeking to operate cross-border.

There have also been studies of benchmarking and entrepreneurship, as well as the manufacturing and construction sectors.

So where does this leave Reg Empey's call for a review of InterTradeIreland? It is worth noting that Empey also said last week, in a separate statement that, "in the forthcoming negotiations it will be essential to ensure that any further agreement with regards to establishing a devolved government will need an economic dimension".

Empey emphasised the issue of "huge infrastructure deficits" which "will need to be resolved if we are to ensure our long-term competitiveness". In this context, Empey is quite rightly pointing up the growing infrastructural deficit in terms of inadequate British Government spending in the Six Counties, which must be urgently addressed.

Reg Empey is also making an important point in saying that the economic dimension must be part of the September talks. This should be in the context of an all-Ireland dimension.

In terms of the infrastructure deficits, while increased spending is a must, so is planning energy, road, rail, telecommunications, health and education spending and investment on an islandwide basis.

In terms of trade, the creation of a one-currency one-tax regime on the island would also be a significant step and needs to be put on the agenda as to how we can justly develop such proposals.

So in that context, maybe we could review InterTradeIreland and Invest Northern Ireland and the other development agencies on the island.

Building an economy on the island that can provide jobs and quality of life for all is a difficult task and needs careful discussion by all of us.