Ombudsman can't see the wood for the trees 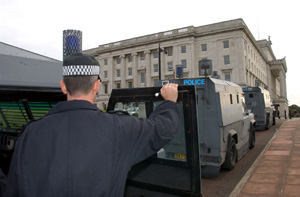 For most northern nationalists, recent rulings by the Police Ombudsman are undoubtedly a case of being unable to see the wood for the trees.

These are the facts. On 4 October 2002, lines of armoured vehicles drove dozens of PSNI officers dressed in a pseudo-paramilitary uniform of boiler suits and caps to the official buildings of a fledgling power-sharing Assembly.

The raiding party entered the offices of government of an elected political party whose electoral rise had been on the basis of opposition to the very state the raiding party held in allegiance.

At the time, the securocrats, who remain at the heart of policing in the North and include Special Branch and British Military Intelligence units like the FRU, were under enormous political pressure to disband as part of the peace process. The raid was ordered by a Chief Superintendent with a long record of targeting republicans.

A short time earlier, the Ulster Unionist Party had adopted an anti-Agreement position during a meeting of the party's ruling council. In other words, David Trimble had abandoned the peace process and joined Ian Paisley's rejection of power sharing democracy.

The dominant ideological discourse peddled by British occupation demands that only republicans can be against 'peace' and only unionists are true 'democrats'. The fact that republicans were pro-active supporters of the peace process and willing participations in democratic power sharing, while unionists rejected both, undermined British explanations of the conflict in the North of Ireland.

In other words, the British had either to confront intransigent unionism or maintain its traditional support for unionism by undermining the Assembly and the peace process. The Stormont raid gave the British Government the opportunity to collude with unionist rejectionism while locating the blame with its historical enemy, Irish republicanism.

And surprise, surprise the media, equipped with the necessary camera operators, just happened to be there to record and later broadcast the dramatic events.

Dramatic, not in what the PSNI raiding party actually found - nothing. But dramatic only in the images of a military-style storming of a democratic institution. The visual message said that Sinn Féin is too dangerous for power sharing.

After the predictable unionist outcry, the British Government stepped in to suspend the institutions. At the time, Taoiseach Bertie Ahern was even provoked into commenting on the stage-managed nature of the incident.

"It has to be acknowledged that as well as the timing of recent arrests and their high profile manner, particularly the search of Sinn Féin offices at Stormont, have led to some suspicions that their purpose was essentially political, to place Sinn Féin in the dock at a time when, as a result of the Ulster Unionist Council meeting on 21 September, unionists were under some critical scrutiny," said Ahern.

This week, Police Ombudsman Nuala O'Loan published the results of her investigation into the Stormont raid. The Ombudsman's probe followed a series of complaints by Sinn Féin's Conor Murphy and other staff members.

O'Loan said she had "found no evidence to suggest that the search was politically motivated or that it was designed to damage Sinn Féin and the peace process".

The raid, according to O'Loan, was "part of normal police process".

But O'Loan did find that "no proper consideration was given by the police to the fact that they were searching the buildings of a legislative assembly". This was "a significant failing" by the PSNI.

On the one hand O'Loan identifies the raid as "part of a normal police process" but on the other criticises the PSNI for failing to give "proper consideration" to "the fact that they were searching the buildings of a legislative assembly".

In other words, despite her initial pronouncement, O'Loan acknowledges that the raid was sufficiently unusual to require a different approach, something other than the 'normal police process'.

I don't know what might constitute "evidence" of political motivation. An elusive PSNI memo anticipating the collapse of the institutions? A nod and a wink from a British NIO official or minister captured on CCTV? The Secretary of State's fingerprint on the warrant?

Well, clearly such evidence would never exist. If investigation into a complaint of political motivation limited itself to the usual rules of evidence, then clearly it would be doomed to certain failure.

O'Loan has chosen to ignore what was obvious to most people, the political timing and public spectacle of the raid. O'Loan also ignores the fact that the impact of the raid was demonstrably political rather than judicial.

And most importantly O'Loan has ignored the political nature of the establishment and operation of Special Branch. The Special Branch don't need authorisation to operate in a political manner. They were established as an anti-republican counter-insurgency organisation. Dirty tricks, political manipulation and propaganda are tools of their trade.

One of the reasons why Sinn Féin has campaigned for the disbandment of Special Branch and the ending of its control over policing is precisely because of its willingness and ability to interfere with the political process.

The fact that O'Loan finds that Special Branch were only doing their job, paradoxically, tells us nothing and tells us everything.

Sinn Féin's Conor Murphy rejected the Ombudsman's findings and insisted that the raid was politically motivated.

"It is the view of Sinn Féin and indeed the vast majority of nationalists that the stage-managed raids on Sinn Féin offices in Stormont were politically motivated and part of a wider anti peace process agenda operating within the PSNI," he said.

"Just because Nuala O'Loan has failed to uncover evidence to support this does not mean that this widely held belief is flawed," said Murphy.

Meanwhile, Sinn Féin policing spokesperson Gerry Kelly has expressed surprise after Nuala O'Loan exonerated the PSNI over allegations that they tried to coerce a forensic scientist to fabricate evidence during the investigation into a shooting at a polling station during the 2001 Westminster election.

Last year, a leading forensic scientist claimed that the PSNI had tried to pressurise her into carrying out forensic tests on evidence which they knew might already be contaminated.

Ann Irwin, the scientist, made the allegation during the trial of Noel Abernethy, who was facing prosecution for attempting to shoot two PSNI officers at a polling station in May 2001. Abernethy was subsequently cleared of all charges.

PSNI Chief Hugh Orde asked the Ombudsman to investigation Irwin's allegation. In her report published on Wednesday, O'Loan cleared the PSNI of interfering with the forensic scientist's work, although she did raise concerns about the way in which evidence was collected.

"The Abernathy case was not the first time that such concerns have been expressed about both the independence and veracity of forensic evidence used in Diplock court cases," said Gerry Kelly.

"The Forensic Science Agency is located inside a PSNI complex. Other cases have also proven that both the RUC and PSNI are guilty of fabricating and manipulating forensic evidence. There is a pattern of Special Branch interference in the due process and that pattern is against a background of miscarriages of justice.

"Unfortunately, this report does nothing to assuage these concerns. The pattern of abuse by Special Branch to obtain Diplock court convictions, by hook or by crook, continues to pervade and infect the criminal justice system and remains to be rectified."