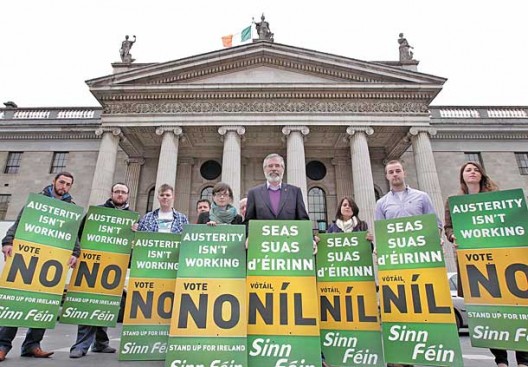 ON 17 JUNE, Irish republicans will gather at Sallins in County Kildare and parade to Bodenstown Graveyard to once again honour the founding figure of Irish republicanism, Theobald Wolfe Tone. Free article

I LIKE European Union referendum campaigns. It’s not because I’m a bit of an EU geek, though clearly I am. It’s because these campaigns provide us, the public, with a real opportunity to scrutinise the EU and its impact on our lives. Premium service article

ON 17 JUNE, Irish republicans will gather at Sallins in County Kildare and parade to Bodenstown Graveyard to once again honour the founding figure of Irish republicanism, Theobald Wolfe Tone. Free article

MARIAN PRICE should be released from prison to be treated in an outside hospital pending her full release, West Belfast MLA Jennifer McCann told Justice Minister David Ford in an urgent meeting sought by Sinn Féin on 21 May. Free article

TO COMMEMORATE the 31st anniversary of the death of Camlough man Raymond McCreesh on hunger strike in the H-Blocks of Long Kesh, the Fegan/Quinn Sinn Féin Cuman, Derramore, arranged for Tony Devlin’s acclaimed 1981 play to be performed in Carrickcruppen Hall on Friday 19 May. Free article

THE 15th anniversary of the death of IRA Volunteer Paddy Kelly is being marked in Killenard, County Laois, on Saturday 2 June. Free article

IF ANYONE was in any doubt about the contempt that the leaders of the ‘Yes’ side in the referendum campaign have for anyone who disagrees with their views and approaches to austerity, it was exposed by Taoiseach Enda Kenny on his media walkabout in Athlone to ‘meet the people’. Premium service article

Left MEPs in Dublin to say ‘NO’ to Austerity Treaty

MEPs from the European United Left/Nordic Green Left (GUE/NGL) group in the European Parliament visited Dublin ahead of the Fiscal Austerity Treaty referendum on 31 May to declare the treaty would be a “catastrophe for Europe”. Free article

THE DEAD are among us. Previously thought consigned to political oblivion, they have loomed out from the dark recesses we had hoped would be their final resting places. They shuffle around, lurching uncontrollably and gibbering self-justifications to passing journalists. Premium service article

EVERY SUNDAY for the past 14 months – every Sunday without fail – the people of the tiny Cork townland of Ballyhea have taken to the streets and marched to voice their opposition to the bail-out of bondholders with taxpayers’ money. And they’re on their way to Frankfurt. Premium service article

THE BBC is always being accused by Tory Mayor of London Boris Johnson and Conservative Party old fogeys of ‘left-wing bias’(!) but now the Beeb is being threatened with legal action by republicans in England over its uncritical coverage of Queen Elizabeth’s diamond jubilee celebrations. Free article

LEINSTER HOUSE. As I waited for Pádraig to arrive from the British/Irish Parliamentary Assembly that was taking place in Leinster House, I glanced at the items adorning the walls of his office. On one wall hangs a massive poster declaring “Donegal - Ulster Football Champions 2011”. Behind his desk is a framed, painted handkerchief of a Celtic Cross made by Irish POWs in the 1980s; it is dedicated to his late father, Volunteer Réamonn Mac Lochlainn. On the noticeboard is pinned an An Phoblacht article from February 1984 highlighting the refusal of the then Labour Environment Minister to meet with Buncrana Sinn Féin Councillor Eddie Fulletron. A poster calling for UN recognition of Palestine as a full member state hangs beside the window. Premium service article