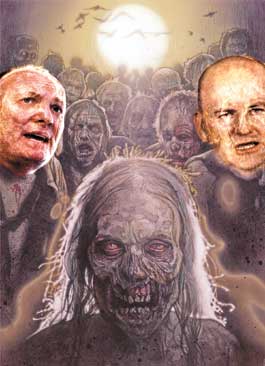 Previously thought consigned to political oblivion, they have loomed out from the dark recesses we had hoped would be their final resting places

THE DEAD are among us. Previously thought consigned to political oblivion, they have loomed out from the dark recesses we had hoped would be their final resting places. They shuffle around, lurching uncontrollably and gibbering self-justifications to passing journalists.

It began with Ganley feeling obliged to throw himself into another European referendum, to the quiet joy of a ‘Yes’ campaign very conscious that he repulses as many, if not more, voters than he attracts.

Since the voters sent him packing in the 2009 euro elections, and rejected his trans-Europe Libertas party, he’s tossed out the occasional article and contented himself with talking to people on Twitter — where the damage he can do is slight.

From being an outspoken opponent of what he imagines the EU to be (some sort of Stalinist, baby-killing, chip-in-child-planting collective) a few years back, he switched to pushing for a federal Europe, and now emerges again as a ‘leading NO campaigner’ based purely on his claim to be so.

The reality is that opposition to the Austerity Treaty, led by Sinn Féin, has primarily come from the Left. More than 40% of Labour voters said they were planning to vote ‘NO’. The very person to put them off is Declan Ganley, a man whose credibility has been shredded time and time again, but who for people supporting progressive politics in Ireland still has (to borrow a phrase) ‘something of the night about him’.

Ganley demanded that the referendum be postponed until it was pointed out to him that this isn’t legally possible. He’s made it clear that with a deal on the bank debt he’d happily support it. His position is confused and his impact will be marginal but this isn’t about the Austerity Treaty.

Whether this referendum is won or lost on 31 May, the reality is that Ganley’s objective — getting himself back in the public eye again — has been accomplished, aided again by a media desperate to avoid having to face the reality of a ‘NO’ campaign led by Sinn Féin.

Last year was a great year for republicans but among the highlights for me is that moment during the last presidential debate, on RTÉ’s Frontline, when Martin McGuinness, moments away from scuppering Seán Gallagher’s presidential campaign, quietly says, “I think you’re in deep, deep trouble.”

Since the Irish people turned away from the candidate from the Galway Races tent last year, Seán Gallagher has ranted and roared at RTÉ, blaming the media and its handling of a rogue tweet for ending his presidential aspirations.

At a conference on the future of digital media in Dun Laoghaire, Gallagher had a lash at relaunching his public media career.

Forty-five minutes of self-pity, obfuscation and denial followed, complete with a Gandhi quote. He managed to compare his experience of being exposed as begging for money for Fianna Fáil despite efforts to distance himself from the party, with what Fr Kevin Reynolds went through when falsely accused by RTÉ of fathering a child.

He went on to suggest RTÉ’s treatment of him was akin to the way the Catholic Church treated the victims of sexual abuse by the clergy, a comparison roundly condemned by abuse survivors the next day. It was proof of nothing except Gallagher’s twisted sense of victimhood and his willingness to exploit the suffering of genuine victims for his own ends.

Poor Seán Gallagher said he was “gobsmacked” by the “arrogance” and “hostility” of RTE to his complaint. His gob was smacked, though, only metaphorically.

He finished the softest of interviews (it was conducted by his presidential campaign adviser, after all) with a little speech about how he had hoped he had inspired others to stand up for the betterment of their communities and businesses.

No doubt in his own head it sounded inspiring and, as he admitted during the interview, as if he was running for President again. In reality, watching it online, it came across as a cheap and more than a little desperate attempt to position himself for a return to politics.

Sadly, it seems we have not heard the last of Seán Gallagher and we cannot rule out the possible return of Ganley’s insufferable self-promotion to national politics.

We can, however, comfort ourselves with the memory that when the Irish people had the opportunity to examine both men at the ballot box — the smooth-talking, flashy businessman with questions over his political links and financing, and the other smooth-talking, flashy businessman with questions over his poitical links and financing — they gave them the boot. If we have to, we can do it again.