A video mocking 15-year-old sectarian murder victim Michael McIlveen is circulating in Ballymena. The video, being circulated by mobile phone, shows McIlveen, who was beaten to death in May, standing with friends and a subtitle below the image reads 'Fuck Mickey Bo'. Free article

Israel's assault on Lebanon, following Hezbollah's cross-border raid on Wednesday 12 July and weeks of unremitting bloodshed in Gaza, brought demands for international action to contain the crisis and mediate an end to the fighting. Lebanon's appeal for the UN Security Council to step in is supported by most Arab governments and by France, Lebanon's former colonial master and the current Security Council President. But the council has been vainly trying for a fortnight to agree a resolution on Gaza, with the US threatening to use its veto in defence of Israel, while US President, George Bush, expressed support for Israel's strategy at the G8 summit in St. Petersburg. A consensus on the more complicated, fast-moving crisis now engulfing Lebanon is highly unlikely. Free article

Sinn Féin MEP Bairbre de Brún has described the arrest of an Irish language school teacher in Belfast for speaking Irish as 'treatment which brings us back to the days of the penal laws'. Free article

Anthony Gormley, the Honorary President of the Tyrone National Graves Association (NGA), died at the age of 76 on Saturday 10 June. In fact, Anthony was buried on his 77th birthday on the very feast of St Anthony himself. Free article

There was magnificent sunshine last Saturday as republicans gathered at the graveside of IRA Volunteer Patrick Cannon from Edenmore on the city's Northside. He died with his comrade Volunteer Peter McElchar of Donegal 3O years ago near Castlederg, County Tyrone. Free article

The week in quotes. Free article 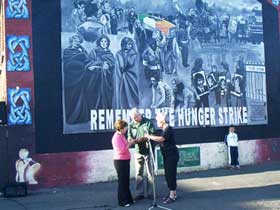