Build a new Ireland in tribute to Martin McGuinness 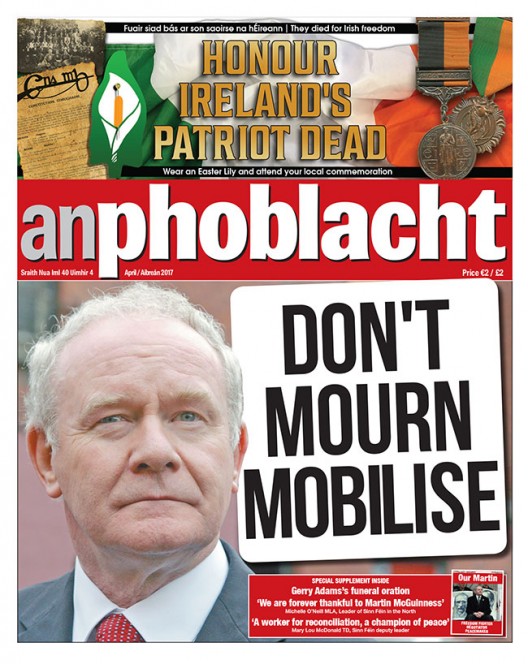 THE PAST FEW WEEKS have been dramatic and traumatic for the republican family. Politics across Ireland has changed. And we have lost an inspirational leader in Martin McGuinness. Free article

GARDA COMMISSIONER Nóirín O’Sullivan is facing a motion of no confidence tabled by Sinn Féin, as the police service finds itself embroiled in yet more serious allegations of malpractice, incompetence and of misleading the public. Free article

The ‘Dirty War’ in Ireland

AS the McGurk’s Bar Massacre families continue their quest for justice from the Ulster Volunteer Force bomb attack of 4 December 1971 that left 15 civilians dead, Margaret Urwin from campaign group Justice for the Forgotten has uncovered more evidence confirming that senior British and unionist politicians as well as top British Army and RUC police officers endorsed a campaign of disinformation aimed at falsely blaming the IRA for the unionist attack on the Catholic-owned pub in north Belfast, writes PEADAR WHELAN. Free article

THE FIRST commemoration of the 1916 Easter Rising was held in Dublin at Easter 1917 and was an act of defiance of British military rule. Free article

Ruth Dudley Edwards hates it and Kingdom or Heaven

Before the Dawn – An Autobiography (Updated). By Gerry Adams and James II, King in Exile: Warrior, King and Saint. By John Callow Free article

The No Action Man

JUST HOURS after taking his place in the White House, US President Donald J Trump followed through on his promise to “get tough” on immigrants (particularly those from Muslim majority states) and announced his travel ban targeting seven states. Free article

WHILE commentators and politicians alike agree that the British withdrawal from the European Union (“Brexit”) poses major threats to Ireland, in terms both of trade and in respect of the Border, the Fine Gael/Independent Government in Dublin stands frozen like a rabbit caught in the headlights. Free article