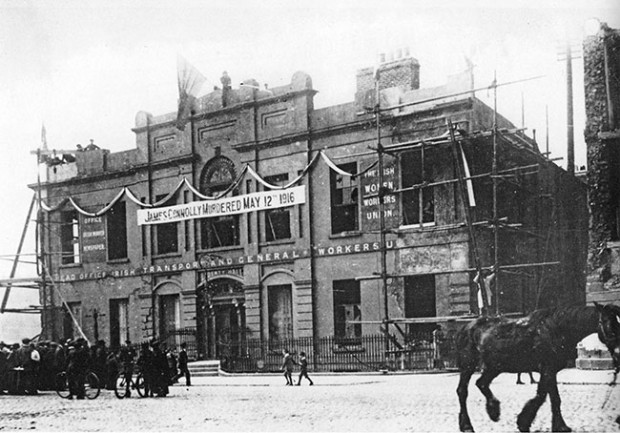 THE FIRST commemoration of the 1916 Easter Rising was held in Dublin at Easter 1917 and was an act of defiance of British military rule.

Many republicans were still in jail a year after the Rising and the city was full of British troops. The Defence of the Realm Act (DORA) imposed strict censorship and public assembly was severely restricted.

Since the execution of the 16 leaders between 3 May and 3 August 1916, respect for their sacrifice had grown among the Irish people. Their writings were reprinted, their photographs were published and sold in large numbers, and songs were sung in their memory.

There was much support for the families of political prisoners, with a leading part in fund-raising taken by Kathleen Clarke, widow of Tom Clarke and bereaved sister of Edward Daly, both of whom were executed.

It was another republican woman, Helena Moloney, who took the initiative in organising the first Easter commemoration. A close comrade of James Connolly and a co-founder of the Irish Women Workers’ Union, she had fought with the Irish Citizen Army in Easter Week at City Hall. She was jailed in England after the Rising and released in December 1916. She immediately threw herself back into the struggle.

At Easter 1917, republican women led by Helena Moloney held a wreath-laying ceremony at the graves of the 16 Irish Volunteers and Citizen Army members buried in St Paul’s section in Glasnevin Cemetery. Then the focus shifted to the GPO. 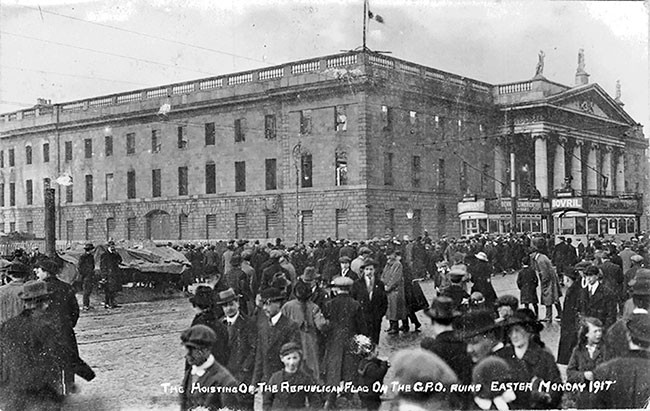 Thousands of people gathered in O’Connell Street on Easter Monday 1917 in defiance of the British authorities. At noon, the hour at which the GPO had been occupied and the Proclamation of the Republic read a year before, a young Volunteer scaled the walls of the GPO. The building was still only a shell of outer walls and it was a perilous climb but the Volunteer managed to reach the flagpole and hoist the Tricolour, to cheers from the crowd.

Members of the Dublin Metropolitan Police then climbed up and tried to remove the flag but it was knotted so tight that they had to saw down the flagpole. It fell to the street and where the flag was hurriedly reclaimed by people in the crowd.

The scene then shifted to the ruins of Liberty Hall where, on 12 May, a banner was displayed: “James Connolly Murdered May 12th 1916”. When the DMP removed the banner it was replaced with an identical one and when they tried to remove this one they found the way to the roof barred by several hundredweight of coal!

Helena Moloney remained active in the struggle for many years and, along with Maud Gonne and others, successfully opposed the proposed demolition of Kilmainham Jail in 1938, ensuring its preservation today.

Every year since 1916 the Rising has been commemorated and it is as important as ever for republicans to do so today and to ensure maximum attendance at this year’s commemorations.