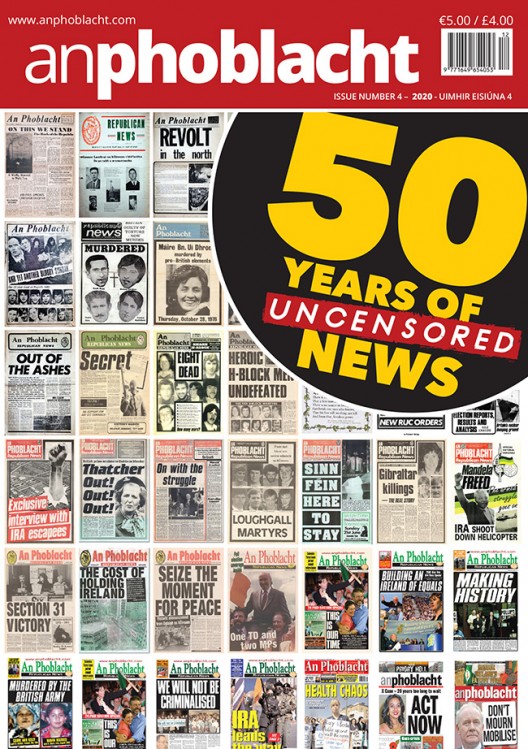 The republican voice will be heard. This simple commitment has been the driving force behind An Phoblacht for half a century. This idea has brought people together through multiple generations to produce editions of An Phoblacht. Free article

Reporting in a War Zone

I went from being Chris Graham, newly released Mountjoy POW to reporter Maeve Armstrong – my by-line with Republican News from 1978-89. The name held its own wee story. Maeve, well, the Irish Warrior Queen herself no less! I was living in a war zone so it might be handy to have a warrior around me and Armstrong, that was my wee granny Julia’s maiden name. She was my real-life heroine, so between the two names, I hoped the strength of character they both encapsulated might rub off on me! Free article

We will always need our guiding lights

Guiding lights are moments of illumination along our pathways, that show us where we are, and where we might go. Often, guiding lights are left by people who’ve walked a path before us, or are created by those companions who are on our journey with us. Free article

The facts about Ireland

Not many people can say that they went to work every day under the watchful eye of the Special Branch. Or that the main (only) perk of their working week was a free meal on a Wednesday night, our publication deadline. That was what it was like to work for AP/RN in the late ‘80s, when I got my start. Free article

On my release from the H Blocks after 16 years, I began work with An Phoblacht. As a former life sentence prisoner, writing for the ‘Phoblacht’ was a platform for political work, an extension of the political education I was involved in while in jail. It was about promoting republican ideals and policies as well as challenging the narrative of the struggle, particularly that of the mainstream media and our political opponents. Free article

An important and historic role in the struggle

Although I had come across the odd copy here and there since at least 1979, the first issue of An Phoblacht that I actually bought was during the Hunger Strikes in the summer of 1981. Free article

From the Den to Dublin

The ‘Postcards from the New Republic’ series is a hat tip to British designer, artist, entrepreneur and Socialist William Morris’s ‘News from Nowhere’ series of articles from 1890 published in the Commonweal, the newspaper of the Socialist League and set in a distant future where Morris’s socialist and romantic utopia has been secured. Our story’s protagonists are Willa Ní Chuairteoir and Lucy Byrne accompanied by their four children James, Afric, Banba, and Alroy who together enjoy and endure the equity and exigency of the future’s New Republic. Free article

You’ll know what to write

Brian Campbell was editor of An Phoblacht from 1996 to 1999. He came to the paper in 1995 as a Reviews editor. Brian died suddenly in 2005. Here, his long time writing collaborator Laurence McKeown gives a personal insight into Brian’s years of writing and political activism. Free article

An Phoblacht readers still remember Cormac cartoons. They often have favourites and, like me, you probably cut a few out of the paper over the years, as that week’s work was so funny or searingly cutting that you couldn’t let it go. His cartoons featured weekly in An Phoblacht for nearly 30 years. Free article