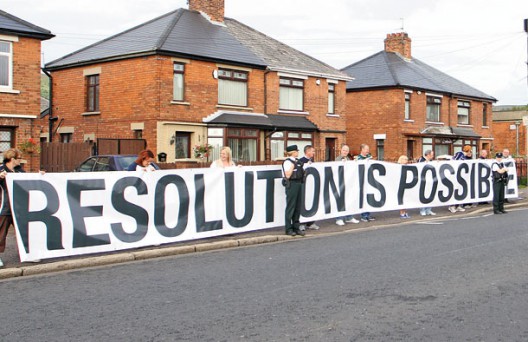 THE CONCLUSION of the protracted Haass Talks on New Year’s Eve without an agreement on parades, flags and emblems, and the legacy of the past in a the Six Counties was undoubtedly a disappointment – but that’s not the end of it. Free article

THE lack of leadership in mainstream political unionism was laid bare on Monday 6 January when the Ulster Unionist Party Executive rejected the Haass document on flags, parades and the past that its own leader had declared was “90% over the line”. Free article

THE Irish Government’s state agency tasked with creating jobs in Ireland is trying to employ an “Executive Assistant” through the JobBridge free labour scheme because it cannot create an actual job due to the public service recruitment embargo. Free article

FAMILIES of children with hearing loss are ringing in the New Year having forced the Fine Gael/Labour Government to change its tune and allocate €3.22million to start the bilateral cochlear implant programme at Beaumont Hospital in 2014. Free article

All to play for this year

In 2014, the people of Scotland have an opportunity to make the biggest geo-political change in these islands since Mick Collins sat across the table from David Lloyd George in London Free article

Nelson Mandela – A hero among heroes

NELSON MANDELA spent his entire life fighting against the injustice and inequality of the tyrannical, white-supremacist, apartheid regime in South Africa. He was also an internationalist and close friend of Ireland and the Republican Movement. Premium service article

SINN FÉIN is a party dedicated to a political struggle for freedom, equality and a just society. It supported the IRA in its armed conflict with the British Government. In that context, Sinn Féin’s motives, actions and campaign were just like those of the ANC and Nelson Mandela in their military and political struggle for a free South Africa. Premium service article

BASQUE POLITICAL PRISONERS face this new year still being the real centre of the peace process in the Basque Country. Free article

A NEW COMMITTEE established in the Oireachtas and chaired by Sinn Féin Justice and Equality spokesperson Pádraig Mac Lochlainn aims to give citizens a direct say in the parliamentary agenda. Free article

WHEN the Fine Gael/Labour Government launched its ‘National Internship Scheme – JobBridge’ in 2011 it was immediately denounced by many on the Left as an exploitatative scheme which would see young people working full-time in menial roles for free. Premium service article