Republicans stand up for equality, human rights and social justice for all 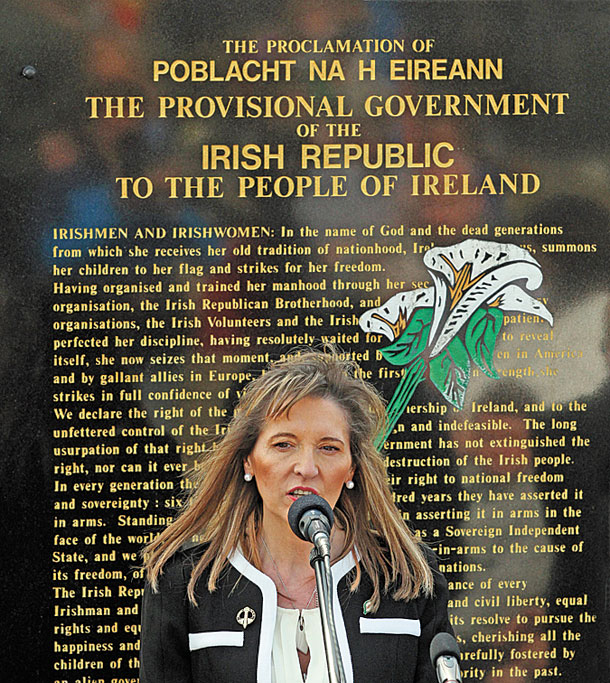 ‘Republicans have shown in words and deeds that we are absolutely committed to this process of reconciliation. But unionists must also participate in this process. They need to reach out to republicans’

AFTER taking part with President Michael D. Higgins and Irish Government ministers in the Irish state commemoration of the 1916 Easter Rising in Dublin on Easter Sunday morning, joint First Minister Martin McGuinness was the main speaker at the Easter commemoration in Monaghan town. The Sinn Féin leader said that “shared hurts need to be acknowledged, lessened and, if possible, healed”.

As part of a wide-ranging speech, Martin McGuinness said:

“Republicans are committed to a genuine process of national reconciliation and this means reaching out to the unionist community in a spirit of generosity and understanding.

“Earlier this month, a confident and united Sinn Féin leadership decided that republican representatives, including myself, should participate fully in the Irish President’s state visit to Britain. Our party leadership took this decision in the context of republican objectives and as an initiative to further strengthen the process of change and reconciliation.

“Republicans have shown in words and deeds that we are absolutely committed to this process of reconciliation. But unionists must also participate in this process. They need to reach out to republicans. The conflict was long and bitter. Many people were hurt on all sides. No one has a monopoly on suffering. It is time to begin discussing how shared hurts can be acknowledged, lessened and, if possible, healed.

“Republicans fully acknowledge the hurt that we inflicted in the course of the conflict. Unionists also need to recognise the hurt they have created. They need to turn their backs on the inequality and repression that marked 50 years of one-party rule in the north. They need to challenge rejectionist unionists. They need to show positive leadership.”

Speaking at the Easter commemoration in Belfast organised by the National Graves Association, Sinn Féin MEP Martina Anderson said that the DUP should remember they were not elected to be messenger boys for the millionaires in David Cameron’s Cabinet in London  imposing “savage cuts to public funding and welfare”.

British Tory policy threatens to destroy the economy in the North, she said.

“If it had not been for Sinn Féin,” Martina Anderson pointed out, “the DUP’s Nelson McCausland was quite prepared to implement the dictates of Cameron’s millionaire Cabinet in Westminster years ago without any change.

Sinn Féin is not opposed to sensible welfare reforms, she said.

“We are opposed to the agenda which seeks to make the most vulnerable and ordinary working families pay for the greed and excesses of the bankers.

“This should come as no surprise to the DUP.

“We have been crystal clear on this. We have voted against the Bill at every stage in the Assembly.

“The DUP on the Executive need to start behaving like ministers for the people.

“Sinn Féin is politically and ideologically opposed to the politics of austerity North, South and in Europe.

“The DUP need to recognise that republicans stand up for equality, human rights and social justice for all – and that is a reality they need to get used to.”

At a republican commemoration in Newry to mark the 1916 Easter Rising, Sinn Féin MLA Gerry Kelly appealed to the loyal orders to step up to the mark and enter into a new phase of reconciliation.

“The loyal orders have not stepped up to the mark in trying to move past conflict and into a new phase of reconciliation,” he said. Unfortunately, the intransigence of hardline fringe unionist elements is not just tolerated but encouraged by unionist politicians, the north Belfast MLA said.

The Sinn Féin MLA accused the small minority of republican so-called ‘dissidents’ of waging war on the nationalist community and having an agenda of derailing any progress in policing, in the Peace Process and the political process. “They have an agenda of a return to a conflict,” he said, accusing them of being heavily involved in criminality.

“To date, the biggest percentage of any killings carried out by these dissidents have been in internal feuds.

“This is not a struggle for Irish freedom. If they are at war it is with each other and the nationalist community.

“Groups with no popular support, no public face and no strategy for the achievement of republican objectives are now merely killing people for the sake of killing.”