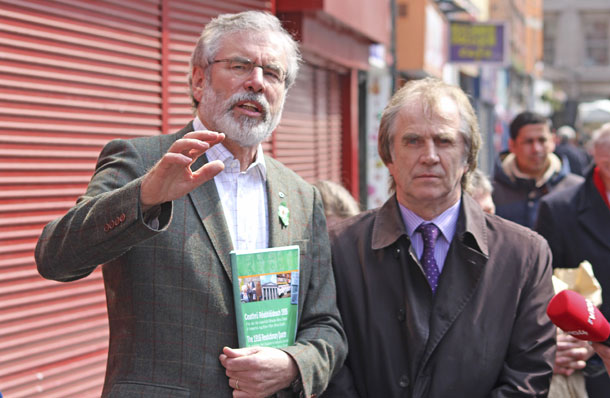 • Gerry Adams TD and the grandson of James Connolly, James Connolly-Heron, at the launch of the Sinn Féin document on Moore Street

“Let us send a very clear message to the Government that it should ensure the full preservation of the national monument and to develop a plan to transform the GPO/Moore Street area into a historic quarter.”

GERRY ADAMS was joined on Easter Sunday by relatives of some of those who fought and died during Easter Week 1916 to officially launch Sinn Féin’s proposals to establish a revolutionary quarter around the buildings and lanes of history where the last act in the drama of the 1916 Easter Week took place.

“Sinn Féin is determined to ensure that 2016, the 1916 Centenary, is marked in the most appropriate way possible as a fitting, popular acknowledgement of the past but also – and just as importantly – as a pointer to a better future.”

He said the Irish Government’s amnesia about the revolutionary period is most evident in its plans for the Moore Street historic monument.

“The buildings on Moore Street, which were the last headquarters of the Provisional Government of the Irish Republic, have been left to fall into ruin. This is despite having been designated as a National Monument since 2007.

“In a sad metaphor of the state we live in, the buildings that survived British bombardment in 1916 now face destruction from property developers who plan to reduce it to rubble and build a shopping centre in its place.

“The potential threat to the National Monument under a current planning application is a matter of serious concern to Sinn Féin and many other citizens.

“I want to take this opportunity to officially launch, at this most appropriate venue and at this appropriate time, this document, The 1916 Revolutionary Quarter: A Vision for Dublin’s Historic Centre.”

He described the document as an “important set of proposals” published by Sinn Féin Átha Cliath and explained:

“It is aimed at ensuring that the 1916 National Monument at Numbers 14 to 17 Moore Street is fully protected and preserved in its entirety as designated and that the surrounding buildings, streets and laneways are retained in such a manner that the potential to develop this area into a 1916 historic and cultural quarter can be fulfilled.

“Let us send a very clear message to the Government that it should ensure the full preservation of the national monument and to develop a plan to transform the GPO/Moore Street area into a historic quarter.”