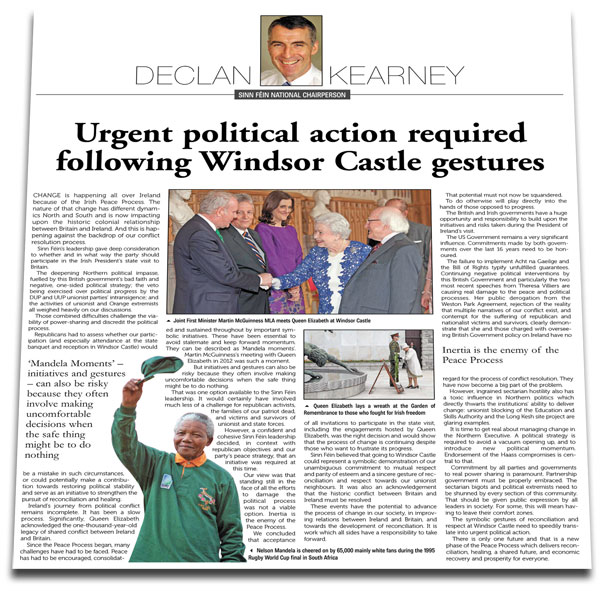 CHANGE is happening all over Ireland because of the Irish Peace Process. The nature of that change has different dynamics North and South and is now impacting upon the historic colonial relationship between Britain and Ireland. And this is happening against the backdrop of our conflict resolution process.

Sinn Féin’s leadership gave deep consideration to whether and in what way the party should participate in the Irish President’s state visit to Britain.

The deepening Northern political impasse, fuelled by this British government’s bad faith and  negative, one-sided political strategy; the veto being exercised over political progress by the DUP and UUP unionist parties’ intransigence; and the activities of unionist and Orange extremists all weighed heavily on our discussions.

Those combined difficulties challenge the viability of power-sharing and discredit the political process.

Republicans had to assess whether our participation (and especially attendance at the state banquet and reception in Windsor Castle) would be a mistake in such circumstances, or could potentially make a contribution towards restoring political stability and serve as an initiative to strengthen the pursuit of reconciliation and healing.

Ireland’s journey from political conflict remains incomplete. It has been a slow process. Significantly, Queen Elizabeth acknowledged the one-thousand-year-old legacy of shared conflict between Ireland and Britain.

Since the Peace Process began, many challenges have had to be faced. Peace has had to be encouraged, consolidated and sustained throughout by important symbolic initiatives. These have been essential to avoid stalemate and keep forward momentum. They can be described as ‘Mandela moments’. Martin McGuinness’s meeting with Queen Elizabeth in 2012 was such a moment.

But initiatives and gestures can also be risky because they often involve making uncomfortable decisions when the safe thing might be to do nothing.

That was one option available to the Sinn Féin leadership. It would certainly have involved much less of a challenge for republican activists, the families of our patriot dead, and victims and survivors of unionist and state forces.

However, a confident and cohesive Sinn Féin leadership decided, in context with republican objectives and our party’s peace strategy, that an initiative was required at this time.

Our view was that standing still in the face of all the efforts to damage the political process was not a viable option. Inertia is the enemy of the Peace Process.

We concluded that acceptance of all invitations to participate in the state visit, including the engagements hosted by Queen Elizabeth, was the right decision and would show that the process of change is continuing despite those who want to frustrate its progress.

Sinn Féin believed that going to Windsor Castle could represent a symbolic demonstration of our unambiguous commitment to mutual respect and parity of esteem and a sincere gesture of reconciliation and respect towards our unionist neighbours. It was also an acknowledgement that the historic conflict between Britain and Ireland must be resolved

These events have the potential to advance the process of change in our society, in improving relations between Ireland and Britain, and towards the development of reconciliation. It is work which all sides have a responsibility to take forward.

That potential must not now be squandered.

To do otherwise will play directly into the hands of those opposed to progress.

The British and Irish governments have a huge opportunity and responsibility to build upon the initiatives and risks taken during the President of Ireland’s visit.

The US Government remains a very significant influence. Commitments made by both governments over the last 16 years need to be honoured.

The failure to implement Acht na Gaeilge and the Bill of Rights typify unfulfilled guarantees. Continuing negative political interventions by this British Government and particularly the two most recent speeches from Theresa Villiers are causing real damage to the peace and political processes. Her public derogation from the Weston Park Agreement, rejection of the reality that multiple narratives of our conflict exist, and contempt for the suffering of republican and nationalist victims and survivors, clearly demonstrate that she and those charged with overseeing British Government policy on Ireland have no regard for the process of conflict resolution. They have now become a big part of the problem.

However, ingrained sectarian hostility also has a toxic influence in Northern politics which directly thwarts the institutions’ ability to deliver change: unionist blocking of the Education and Skills Authority and the Long Kesh site project are glaring examples.

It is time to get real about managing change in the Northern Executive. A political strategy is required to avoid a vacuum opening up, and to introduce new political momentum.  Endorsement of the Haass compromises is central to that.

Commitment by all parties and governments to real power sharing is paramount. Partnership government must be properly embraced. The sectarian bigots and political extremists need to be shunned by every section of this community. That should be given public expression by all leaders in society. For some, this will mean having to leave their comfort zones.

The symbolic gestures of reconciliation and respect at Windsor Castle need to speedily translate into urgent political action.

There is only one future and that is a new phase of the Peace Process which delivers reconciliation, healing, a shared future, and economic recovery and prosperity for everyone.