HSE plan would cause health chaos

THE Irish Nurses' Organisation (INO) has said that 6,000 frontline nurses would be lost under plans by the 26 County Health Services Executive (HSE) to not fill posts that become vacant. In a leaked document that was sent to managers and unions, the HSE said it was seeking major cuts in staff numbers. The document also warned managers that they could face disciplinary action if they breached new restrictions on hiring agency staff. The HSE document repeats proposals announced after the Government introduced a ban last month on recruitment and promotion in the public service. Free article

Gerry Adams in Gaza and Israel

THE visit by Gerry Adams at the head of a four-strong Sinn Féin delegation to Gaza and Israel earlier this month - after Gerry's talks in Washington last month with US Secretary of State Hillary Clinton and Special Envoy George Mitchell about the Middle East - made headlines across the Arab world, Israel and beyond. On 7 April, the Sinn Féin delegation - Gerry Adams, Richard McAuley, Ted Howell and Harry Thompson - visited the region for four days. This week, concluding his two-part story of their experience, Richard McAuley tells of their time in Gaza, including meeting the Hamas Prime Minister and Fatah and the PLO. Free article

DETAILS of 10 public meetings to be held across the North in the coming weeks as part of the Sinn Féin's programme of promoting a 'National Conversation for a United Ireland' have been announced by Gerry Adams. The public meetings will provide an opportunity for a discussion between the party leadership and the public on this key republican objective and on other matters of concern, including the current economic crisis. Free article

POLITICIANS and community leaders in south Belfast have been urged by Sinn Féin MLA Alex Maskey to unite in support of foreign nationals who live in the area in the wake of an upsurge of hate crimes. "Political and community representatives have a duty to make it clear that racism has no place in this community," said Maskey. Free article

16 Moore Street and GPO should be made part of historic quarter, says MEP

HUNDREDS of campaigners who want the last headquarters of the Easter Rising 1916 garrison in Dublin preserved as a national monument as part of Ireland's history linked arms around 16 Moore Street on Sunday to publicise their cause. 16 Moore Street is in an area earmarked by property developers for a €1.25 billion shopping centre. A Bord Pleanála public hearing on the plan began this Monday. Free article

SINN FÉIN has again called for greater fiscal autonomy for the North and a single, all-Ireland strategy on taxation and economic development. Speaking prior to the British Chancellor Alastair Darling tabling his budget on Wednesday, Sinn Féin Economy Spokesperson and South Antrim MLA Mitchel McLaughlin said: "The present economic climate in which we find ourselves only strengthens the argument for greater fiscal control in the hands of locally elected politicians. Politicians who are responsible to the electorate need to take more control of our economic destiny. Decisions taken by the British Treasury are taken in the interests of the British Government, the British Banking system and economic conditions pertaining principally on the island of Britain. Any affects that these decisions have on conditions in the North of Ireland are peripheral to the thinking of the British Treasury. Free article 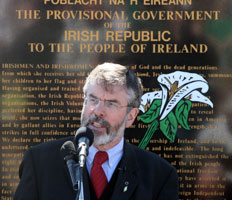 A chairde,
In 2009 Irish republicans are as committed to the objectives of Irish independence, national unity and social equality as we were when the first and only all-Ireland Parliament – An Chéad Dáil – met 90 years ago.
Sinn Féin has a strategy and comprehensive policies to achieve these objectives.
Building political strength across the island and winning allies... Free article