SÉAMUS KELLY says The crisis in public services, especially health and social care and the impact of immigration in Ireland are currently subjects of public debate Free article

It's come to something when the only organ to respond to Michael McDowell's astonishing attack on RTÉ last week is An Phoblacht, considering that members of Sinn Féin were for so long banned from the station. Free article

The week in quotes. Free article 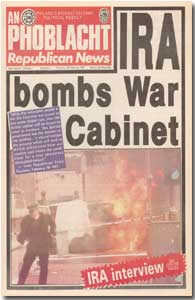 On 24 January 1885 Captain William Mackey Lomasney and his Clan na Gael struck at the very heart of Victorian imperialism when they bombed Westminster Hall, the Tower of London and the House of Commons.

Almost to the week 106 years later, the IRA, in February 1991, bombed the British War Cabinet, which was meeting at the centre of British... Free article