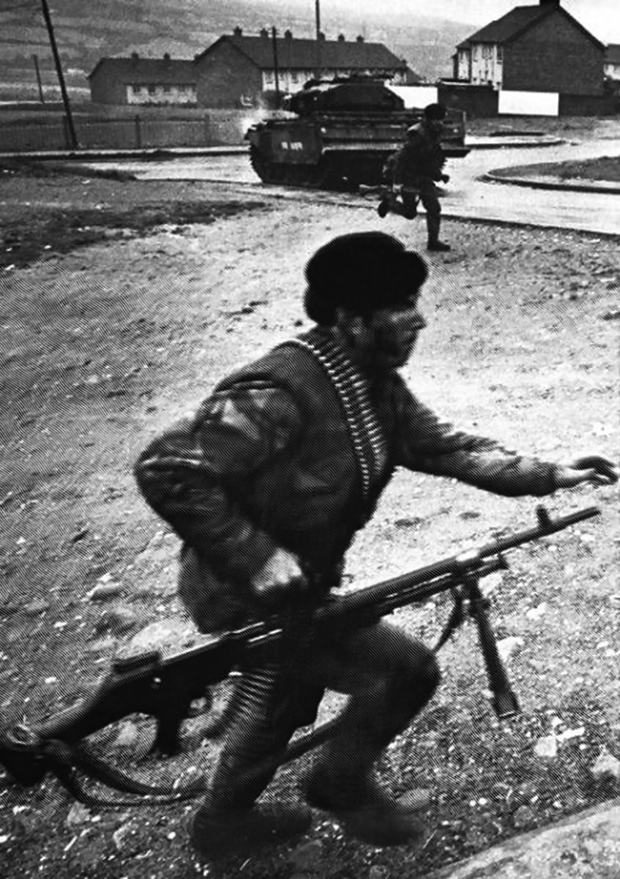 One of the largest military operations undertaken by the British Army since the end of the Second World War was mounted across the Six Counties on 31 July 1972. Danny Morrison writes 50 years after on the both the background to and days of what British military commanders codenamed ‘Operation Motorman’.

Free Derry had been established during the Battle of the Bogside in August 1969 when young nationalists stopped the RUC from coming into their area. Weeks earlier, Sammy Devenney had died from injuries he had received from the RUC who had broken into his William Street home and attacked the family with batons, fracturing their father’s skull and also causing fatal internal injuries.

Even when the British Army were deployed on 14 August and established barracks, their movements were severely restricted to night-time raids and patrolling on the fringes, to such an extent that the nationalist community enjoyed some relief from daily repression. Certain parts of other nationalist urban districts that the Brits found it dangerous to patrol were designated by the state and the media as no-go areas. That was to change in late July 1972, despite the slaughter six months earlier around Rossville Flats on Bloody Sunday.

When Stormont fell in March 1972 and direct rule was imposed by Westminster, the new Secretary of State, William Whitelaw, appeared open to new ideas. A huge Unionist march and rally at Stormont protested their loss of power. The internment of nationalists was slowed down and there would eventually be an IRA/British Army truce and secret talks between the republican leadership and the British government in London in early July 1972.

Meanwhile, the British right-wing media whipped up a frenzy about no-go areas being an affront to the rule of law. In 1971, loyalist vigilantes had formed the Woodvale Defence Association which took in the Shankill area in Belfast. The WDA morphed into the paramilitary Ulster Defence Association which would go on to assassinate hundreds of Catholics, often in collusion with British military intelligence.

The UDA was indulged by the British Army and both openly flirted and cooperated in establishing roadblocks. The UDA threatened to establish its own no-go areas unless action was taken against nationalist Derry and Belfast. There were other no-go areas in Newry, Armagh, Lurgan, and Coalisland. 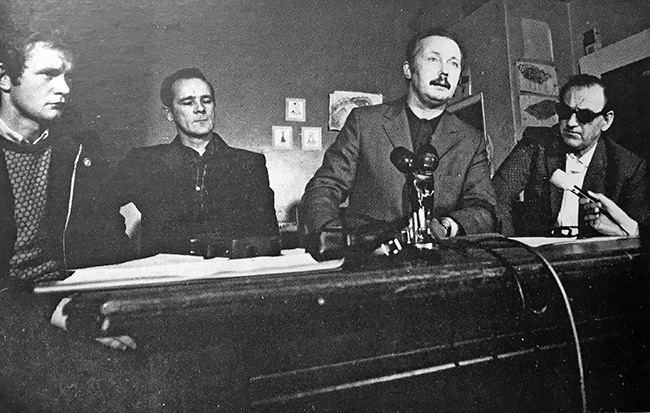 As a precondition for calling a truce, the republican leadership had demanded that its prisoners be given political status and that Gerry Adams be released from Long Kesh to participate in the talks. Whitelaw agreed. The British reneging on political status four years later led to the anti-criminalisation protests in Armagh women’s prison and in the H-Blocks, and to the 1981 hunger strike.

On 26 June, the IRA ceasefire started. Talks took place in London on 7 July and although they were inconclusive, the ceasefire was to continue until it was stretched to breaking point by the actions of the British Army in Lenadoon in West Belfast on 9 July. The housing authorities had allocated Catholic refugees’ possession of empty houses at the bottom of Lenadoon which had been formerly occupied by Protestants who had left the area.

The UDA threatened it would violently resist the rehousing of the refugees. As the families proceeded down Lenadoon Avenue led by a lorry carrying furniture, they were blocked by barbed wire barricades manned by soldiers. The British Army drove a Saracen armoured car into the lorry, violently blocked the path of the families, dragged the driver from the cab of the lorry, and then began firing rubber bullets at the refugees. 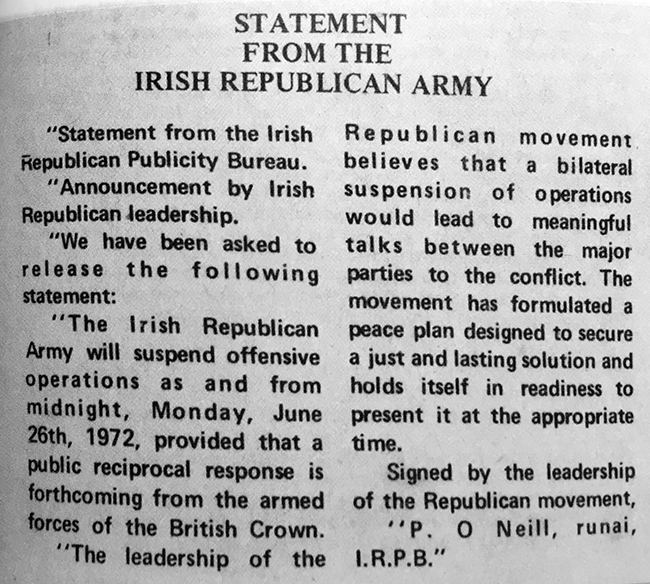 On 21 July, the IRA planted 22 bombs, including car bombs, around Belfast and the city centre which killed nine people, including civilians and soldiers, in what became known as Bloody Friday. Images of the dead and injured were horrific and there was widespread condemnation. At the time, the IRA insisted that they had given adequate and precise warnings and questioned whether the RUC and British Army had acted on the information. I believed this myself initially until, as a result of the peace process and exchanges about the past, I met with former RUC men post-Good Friday Agreement who told me, and I believed them, that they were quite simply overwhelmed by the number of bombs and couldn’t cope.

Bloody Friday and the resumption of IRA military attacks gave the British government the pretext they need for launching Operation Motorman against the no-go areas. There was a build-up in troop numbers and in the early hours of 31 July, 30,000 soldiers and 5,500 members of the Ulster Defence Regiment moved into republican areas, including 11 battalions deployed in Belfast.

During the short truce period, many Volunteers had gone home for the first time in months and enjoyed some family life, but it was obvious that the Brits were preparing for an invasion. As it turned out, it was to be their biggest operation since Suez in 1956 and everyone was alerted to stay in billets. In Derry, marine craft came up the Foyle estuary and landed Royal Marines and Royal Engineers with heavy equipment. Centurion bulldozers were used to remove the permanent barricades at which the IRA had often conducted checkpoints. During this operation, the Brits shot dead 15 year old Daniel Hegarty and wounded his young cousin. The boys had gone out merely to see the tanks. Soldiers also shot and wounded an unarmed IRA Volunteer Seamus Bradley who was not on active service. Most of the IRA had gone to ground. A decision had been taken not to engage in a stand-up firefight. Soldiers refused to treat Seamus Bradley and he bled to death.

I’d heard the armoured cars roll into the district and could hear the crackling of military radios. I cursed myself because the house in the Falls I was staying in was not the safest and I’d only come in at around 1.30am. I quickly climbed over the neighbouring yard wall and stayed in an outhouse from where I could hear banging and shouts for about two hours. I wasn’t sure if they were doing a house-to-house or targeting specific homes so I made my way over yard walls and when I could see them leaving the Fox’s in Iveagh Parade, I climbed into their yard and took refuge in their house. Bridie Fox was to keep a record of the searches on her home during the conflict – 89 raids by the British Army in total, usually in the early hours. Soldiers kicking in the front and back doors. Young ones terrified. Rooms wrecked as they came looking for Gregory and 17 year old Paul. 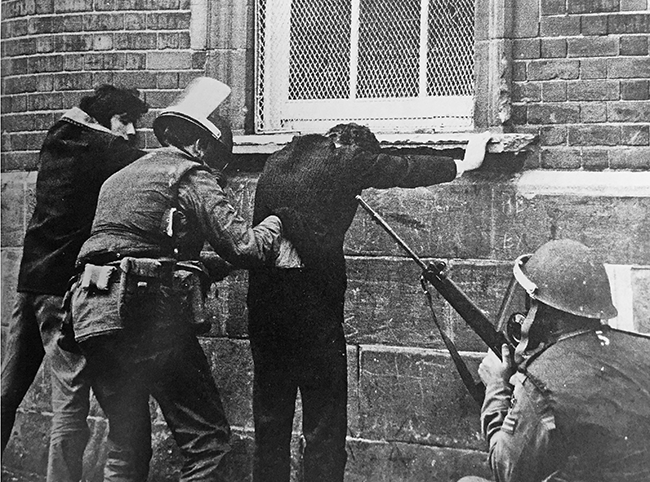 During Operation Motorman, the Brits occupied the GAA’s Casement Park in Andersonstown and Mac Crory Park on the Whiterock Road. They also took over the grounds of St Joseph’s teacher training college. In North Belfast, they occupied the top floors of Artillery Flats.

In our area, they took over the primary school in Mica Drive and built a military post on the top floor of the nurses’ home at Broadway Tower which gave them a commanding view of Iveagh and Beechmount.

They had already established Broadway Army Post inside the grounds of the Royal Victoria Hospital from August 1969 in contravention of the Geneva Convention. It was a notorious barracks – I was held there several times – and, months after the revelations about the ‘hooded men’, the scene of the torture in April 1972 of three locals – Eddie Duffy, Gerry Bradley and Gerry Donnelly, who had been given electric shocks in the genitals, and whose case was joined with that of the hooded men being taken at the European Court of Human Rights.

In the first days after Operation Motorman, British Army foot patrols were huge – sometimes up to one hundred strong. But, of course, it meant they were easily spotted and avoided or presented more targets. I think the Brits realised this very quickly because within two weeks, they reverted to smaller, mobile patrols, backed up by protective military vehicles circling the streets around them.

On paper and in propaganda terms, the no-go areas were reoccupied but in reality their reputation as being republican strongholds continued in the psyche of the Brits who knew they could only hold the streets during times of military saturation.

General Robert Ford, Commander of Land Forces, boasted that "Anyone can now go anywhere at any time." But not in South Armagh. The IRA had mined so many roads they were too dangerous for military vehicle use and the Brits even had to use a helicopter to empty the bins of Crossmaglen barracks.

The British Army described their objective in 1972 as ‘muscling the IRA out of existence’. How did that work out?

Many years after Motorman, senior British Army officers began acknowledging that their war against the IRA had failed. These admissions, I believe, were important in seeding the early peace process. In 1988, Sir James M. Glover, former General Officer Commanding the British Army in the North, said: "In no way, can or will the Provisional Irish Republican Army ever be defeated militarily."

In 1992, a senior British Army officer in The Times went further: "The IRA is … better equipped, better resourced, better led, bolder and more secure against our penetration than at any time before. They are an absolutely formidable enemy. The essential attributes of their leaders are better than ever before. Some of their operations are brilliant…" In July 2007, the BBC published an internal British Army document in which one military expert said that it had failed to defeat the IRA. It described the IRA as ‘a professional, dedicated, highly skilled and resilient force’.

Operation Motorman was just another failed attempt to use overwhelming military might against a long-suffering community and against a people’s army whose struggle and sacrifices ultimately brought the British to the negotiating table.

Danny Morrison is a former editor of An Phoblacht/Republican News