Out of sight, out of mind

Refugees in Calais and Dunkirk 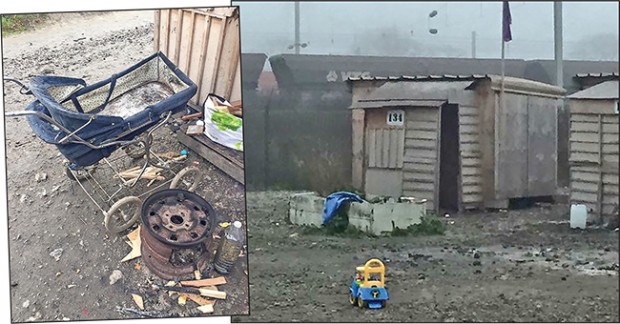 • Life in the camp is grim

SEÁN BYERS AND I were part of an Irish Congress of Trade Unions delegation to “The Jungle” refugee camp in Calais in September. There we heard stories over and over again of families torn apart, of people losing everything, the dangers facing women and unaccompanied minors, police brutality, and systemic discrimination. Unimaginable suffering, death, despair and uncertainty loomed large over the camp.

But in the face of this adversity we also witnessed some of the greatest examples of humanity and community solidarity.

Residents and volunteers alike exhibited incredible resilience, resourcefulness and collectivism, taking a negative experience and transforming it into something positive, in many instances making a home out of nothing.

The outcome of this delegation was the launch of ‘Not On Our Watch’, a coalition of activists and civil society organisations which successfully lobbied the Irish Government to relocate 200 of the unaccompanied children displaced when the camp was demolished in October.

Disgusted by the conditions we encountered, inspired by the work being done on the ground, and frustrated with the media blackout that has followed demolition of ‘The Jungle’, we made the decision to spend the Christmas break volunteering in Calais and at the Dunkirk refugee camp.

The need for volunteers and practical assistance is now greater than ever precisely because the community and support networks that existed in ‘The Jungle’ have disappeared with the camp itself. Displaced refugees, where they have not been dispersed among detention centres across France, are atomised by the daily harassment and vilification they face at the hands of an auxiliary police force that evokes memories of the notorious B-Specials, the CRS (Compagnies Républicaines de Sécurité).

Refugees endure a recurring game of cat and mouse with the CRS, whereby the former attempt to evade the clutches of the latter in order to reach friends and family in nearby towns or to go about their daily lives.

Racial profiling is prevalent, with the CRS stopping and detaining people based on their appearance or skin colour. This is emblematic of the treatment routinely experienced by refugees not only in detention centres and the courts but also in shops and other public places – experiences which compound their suffering, isolation and feelings of hopelessness. 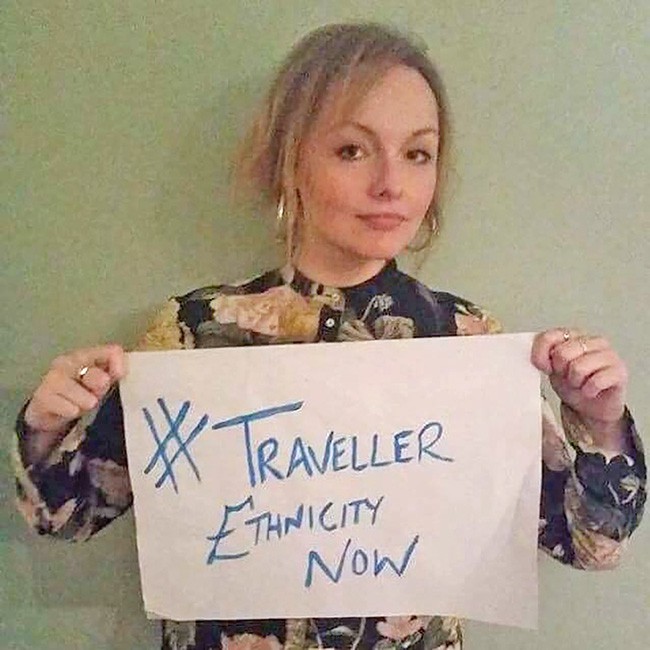 The greater part of our three-week visit was spent working in the Dunkirk refugee camp, rebuilt and given official recognition by the Green Party Mayor in March 2016. Though it seemed to be somewhat of an improvement on ‘The Jungle’, conditions at the Dunkirk camp deteriorated as the population almost trebled since October, the weather has taken its toll and local authorities introduced a moratorium on structural repairs in the face of popular opposition to the camp.

We were stationed at the camp with Care4Calais, which had won a contract with the local authority to clean the interior walls and floors of the makeshift huts in which up to nine people reside. These huts are in effect badly-constructed garden sheds made from plywood. As such, they are not fit for human habitation, providing very little protection against the elements and susceptible to the build-up of a dangerous black mould that can in its worst form cause meningitis. Indeed, many of the camp’s residents – from four-month old babies to pregnant women – have fallen badly ill and required hospital treatment as a direct result of their hazardous living conditions.

Despite the restrictive terms of the cleaning contract, we developed a project that had at its aim the repair and winter-proofing of the camp’s 330 shelters. This was done ‘under the radar’, with the support of NGOs with whom we established positive relationships as individuals with a common purpose and camp residents seeking to improve their living conditions.

For the men in the camp, the absence of work and the means to provide for one’s family is emasculating and a source of frustration; reliance on charity perpetuates feelings of helplessness and shame. Recognising this, we sought not to present ourselves as great white saviours but rather build a team around the skills and experience of camp residents – engineers, tradesmen, designers, architects – and, with the goodwill of groups inside the camp, generate a real sense of community development.

Through this we developed friendships with residents, who insisted on sharing what little they had. We came to look forward to seeing familiar faces each morning, having sweet tea around a fire, and enjoying conversations that transcended all cultural, linguistic and national boundaries. We were regaled with Oro Se Do Bheatha Bhaile by a group of Kurds on New Year’s Eve, spent an afternoon talking family, history and culture with a group of Afghanis, and were routinely teased about our accents and standard of English. The jokes we shared were of the sort that are only born out of real trust and familiarity. 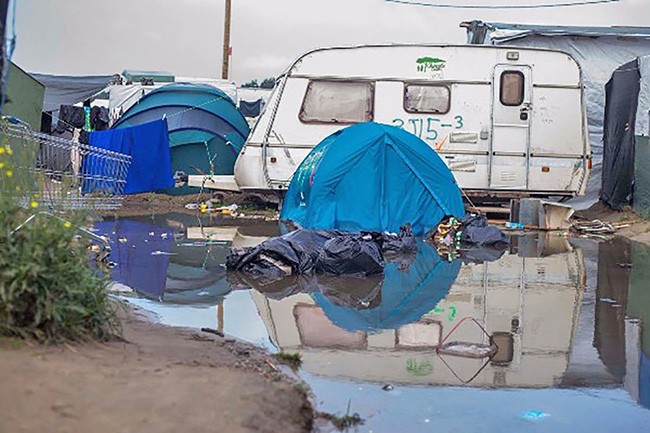 This trust and familiarity extended to the volunteers from various organisations who sustained the project with financial contributions and the supply of wood, blankets, insulation and tools needed to carry out our work.

It was due to this collaborative effort that we were able to make such progress, with improvements made to approximately 100 huts at the time of our departure. We heard first-hand how our work had made the freezing nights and torrential rain slightly easier to endure, with one family telling us, for example, that they had slept soundly for the first time in four months.

When a seven-year-old Kurdish girl shared her Christmas chocolate with me because I’d scrubbed off the mould that was making her asthma worse and repaired a wall so that her blankets wouldn’t get wet anymore, I knew that I’d made the right decision to prioritise the desperate needs of individuals over strict rules enforced by the council.

Fearing that the Dunkirk camp could develop into another ‘Jungle’ and become a permanent fixture, the local authorities intervened to put a stop to our work. We refused demands to remove and undo the winter-proofing. Rumours abound that the lease for the land on which the camp is built expires in March, at which point the Mayor will be faced with the choice between making further provisions or displacing extremely vulnerable people, a large proportion of whom are women and young children. Just as The Jungle’s demolition has demonstrated that ‘out of sight, out of mind’ does not address the fundamental issues of the refugee crisis. The hasty eviction of the Dunkirk camp’s residents cannot serve a positive purpose other than a propaganda one for the French political class.

Mainstream media news coverage has vacillated remarkably between depictions of a European refugee crisis and a so-called ‘migrant crisis’, an implicitly derisive term. The presumptive and pervasive depiction of refugees as mere economic migrants has been a crucial discursive manoeuvre in the spectacle of fortress Europe’s ‘border crisis’. Little surprise then that begrudging gestures of belated magnanimity towards those who may ultimately be granted refugee status by France have been coupled with promises of speedy expulsion for those deemed to be only migrants – illegalised, presumably undesirable and deportable. 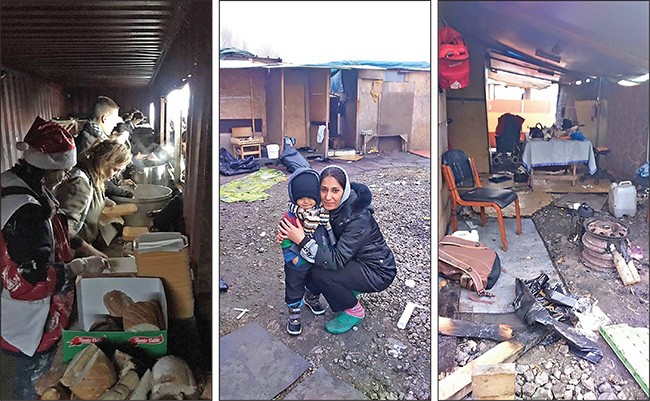 Abruptly, the desensitising and cynical rhetoric of a ‘migrant crisis’ began to recede in favour of appeals for compassion in the face of real tragedy, accompanied by a reinvigorated language of ‘refugee crisis’.

Frustratingly, since the demolition of The Jungle, the issue has once again faded from the media and yet refugees are sleeping on the streets of Calais and Paris in sub-zero temperatures. They are being tormented by the CRS police who have been confiscating sleeping bags, dismantling tents and obstructing any effort to improve living conditions. The police appear to be upping the ante because they know that the issue has faded from people’s minds and that the limited protections that existed before have dissipated.

While we will continue to advocate for wholesale policy change at home, our project in Dunkirk has culminated in the coming together of a group of volunteers who are returning to the camp in February with the aim of continuing the work. We intend to circumvent the poisonous politics and corruption of the charity sector and, with the help of friends inside the camp, bring two vanloads of supplies directly to refugees.

In addition to this, we will lobby the Mayor for structural improvements to existing shelters and encourage greater communication and co-operation between those working on the camp. We call upon people to support this effort in any way they can and to join us in keeping the issue alive in public consciousness.