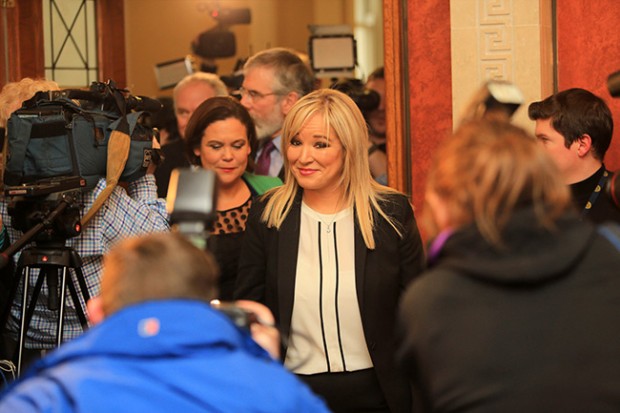 THERE IS a sizeable constituency of media ‘republican watchers’. Fascinated by or maybe even politically unnerved by the growth of Sinn Féin’s success, the republican watchers have to report everything through a distorting lens of untruths, innuendo and insinuation. One of the latest examples is the announcement of Michelle O’Neill as the new leader of Sinn Féin in the North while Martin McGuinness deals with a serious illness.

‘Leader in the North’ prompted a rash of Game of Thrones memes, of course, but most of the mainstream media reverted to type.

'The new face of Sinn Féin’

The Daily Mail (that’s the London-based one, not the Irish version) told readers that Michelle O’Neill was a “daughter of former IRA prisoner”. Four days later, Michelle had become: “The leader from a family drenched in blood”.

Forget about Michelle O’Neill’s 20 years as a campaigning activist, councillor, MLA and minister for all Six-County citizens . . . all you need to know is:

‘The Man from the Daily Mail’ asked:

“Could there be a greater contrast between the glitzy Miss O’Neill and the blood-soaked old guard?”

RTÉ TV’s Tommy Gorman was on a similar vibe, commenting: “The old guard begins the handover to a new generation.”

The Belfast Telegraph claimed “Michelle O'Neill appointment consistent with Sinn Féin's ideological turnaround as it aims to shed military past”. The article was written by former republican POW Anthony McIntyre, an avowed opponent of Sinn Féin. 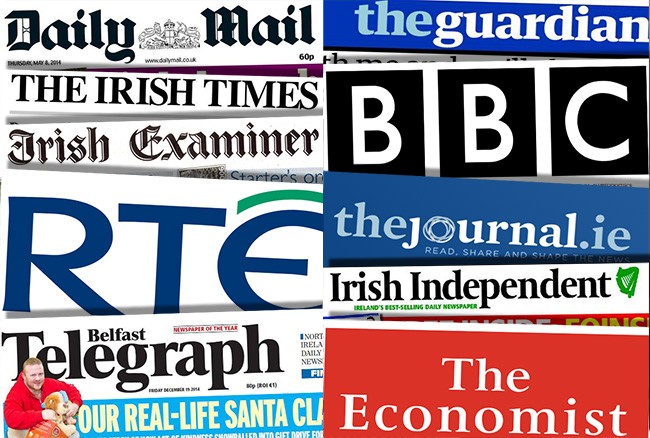 Things you should know

The Economist found ways to get military references into their article. Sinn Féin has a “high command” and Michelle O’Neill “is a good television performer, known in the Assembly for her” . . . (wait for it) . . . “machine-gun-like delivery”. Rather than follow the Daily Mail’s hyperbole on Michelle’s family, they distil this into the declaration that “she is from an impeccably republican family”.

The Irish Examiner offered a catchy clickbait article on Michelle titled “Five things you should know about Michelle O’Neill”. This was also to be found on the Irish News website too but with no hint of who got their five first.

So how do you become Sinn Féin’s leader in the North? Could it be that the Sinn Féin Ard Chomhairle – elected by delegates every year at the party’s ard fheis – would have the final say?

“Appointed” was one line on the Journal.ie online news website. “Named" was the initial wording in the Guardian. Henry McDonald, however, thinks that O’Neill’s new role marks “a sea-change in republican politics as she hails from the post-ceasefire generation of activists”.

‘Loyal to the party’s Old Guard’

Henry also told readers that “O’Neill now sits on Sinn Féin’s ruling national executive, the Ard Chomhairle, and is loyal to the party’s old guard leadership, the now ailing McGuinness and its president, Gerry Adams”. (Henry must have gorged on Game of Thrones box sets over the Christmas.)

Henry was not alone in the throne room.

“O’Neill crowned successor to McGuinness” was the headline on Gerry Moriarty’s Irish Times article, where he wrote of “great fanfare” and the “inauguration” of O’Neill.

Moriarty also wrote of the “curious, ruthless way the party does business”. This is the republican watchers’ code at work; after all, why use efficient or effective when “ruthless” is loaded with so much more menace?

And what’s so curious compared to other parties? Sinn Féin couldn’t be an open, transparent party, could it? It only costs a few euro for an annual membership, Gerry.

The BBC stood out to me for the directness of their reporting, so we find that “Sinn Féin has announced that Michelle O'Neill is to replace Martin McGuinness” and “the 40-year-old County Tyrone woman is the current Health Minister, having previously been Agriculture Minister”.

(Wow, who knew it could be so easy to report just this.)

Finally, there are our old sparring partners over at the Irish Independent, angst-ridden veteran republican watchers.

Niall O’Connor wrote that O’Neill had impressed the “party hierarchy and sections of the electorate”, and so was “handed” the Health portfolio” following last year’s elections.

O’Connor does acknowledge that “Ms O'Neill was commended by many for lifting the lifetime ban on gay men donating blood” before adding:

“But it is perhaps Ms O’Neill’s likeability that makes her the best candidate for the post of deputy First Minister.”

Michelle has a “likeability factor”, Niall notes approvingly, although he should know that that’s a widespread trait amongst us Shinners. We’re nice people. And Michelle is very, very capable as well as ‘nice’.

“Unlike others in the party” Michelle O’Neill also “represents the so-called ‘New Sinn Féin’”. So-called by whom?

Expect more of this in the time ahead as young news reporters struggle with the concept of the natural evolution of an organisation’s way of working – unless you’re the Irish Independent or Sunday Independent, of course.