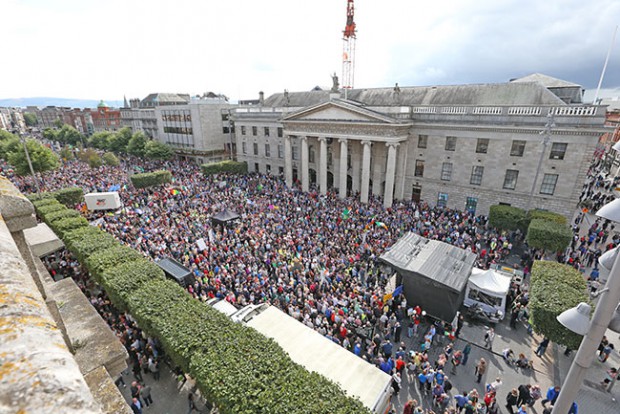 • Right2Water is an unprecedented extra-parliamentary campaign supported by trade unions but which, crucially, derives its power from working-class communities

The radical Protestant tradition of dissent, of involvement with the labour and republican movements, is key to unlocking the progressive potential contained within the sectarian quagmire that is the Six Counties

FOR THE FIRST TIME in the history of the 26 Counties, the political establishment (the two Civil War parties plus Labour) has been shaken to its core by a mass mobilisation of the citizenry.  That the three main parties can no longer rely upon the acquiescence of the majority is clear from a series of opinion polls that put their combined support below 50%, roughly half of what they received 30, 20 or even 10 years ago.

Central to this transformation has been the emergence of Right2Water, an unprecedented extra-parliamentary campaign supported by six trade unions but which, crucially, derives its power from the working-class communities of Ireland. This campaign has in turn spawned Right2Change, a Left progressive political campaign which aims to eschew the vanguardism of party politics and instead engage the public in a debate around its Policy Principles for a Progressive Government and other policies that are brought to the table as part of that process of engagement.

Whatever shape a progressive political alternative takes, it will only be as strong as the movement that supports it, ensuring that the progressive programme on which it is based does not give way to the trappings of power, prestige or populism. The continued strength of an extra-parliamentary citizens’ movement, rooted in communities and the progressive labour movement, is therefore crucial to advancing wider forms of democratic participation.

Meanwhile, the labour movement itself must be rooted in struggle and be guided by the understanding that we are in the midst of a class war. In other words, labour’s role is not to be a partner of neoliberalism of capital, but an active opponent of the very forces that have brought the global economy to the brink of collapse whilst feathering the nests of the few and attacking the basic living standards of the many.

A renewal of social partnership and other forms of co-option into the neoliberal project must be rejected outright by a progressive trade union movement whose envisaged role in building a progressive alternative must both promote economic democracy inside and outside the workplace.

People develop the capacity to understand and change the world through active participation in practical life and through everyday struggle. Class consciousness does not materialise spontaneously or as a result of some natural evolution but is built and developed in conjunction with a critique of the dominant ideology – in this instance neoliberalism, austerity and the narrative of TINA (“There Is No Alternative”). 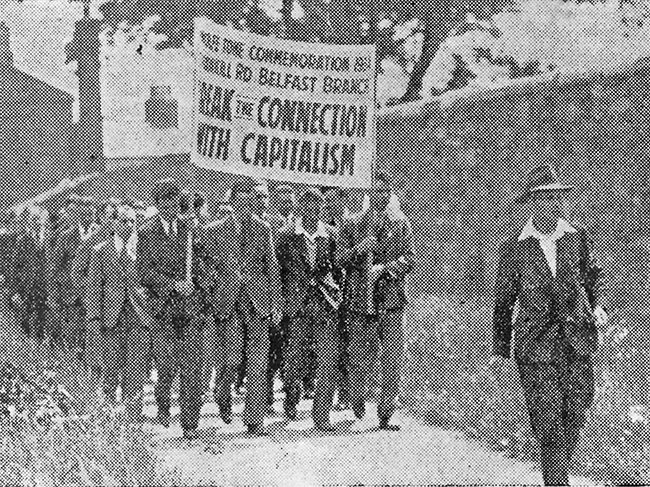 • The radical Protestant tradition: A contingent from Shankill Road march at Bodenstown in the 1930s

Nor is this a mere abstraction. It is our experience from delivering political economy schools across the island that local Right2Water community groups, lay trade union members and indeed grassroots political activists are starting to become acutely aware of their place in the world, finding common cause with other marginalised groups in the process.

Success at home will also depend on international alliances, not just in the far-flung corners of Europe but in Britain. The mobilisation of Labour’s traditional support base under Jeremy Corbyn’s radical vision for Britain presents one natural ally with which a progressive Irish formation should establish close links. UNITE, Unison and the Communications Workers’ Union’s endorsement of Corbyn gives us a running start in that respect.

Likewise, in Scotland, the Radical Independence Campaign, its offshoot RISE [see], and progressives within and on the fringes of the Scottish National Party, all offer potential for radical change across these islands.

Closer to home, progressives of all shades must recognise the need for honest engagement with the Protestant working class, for it is only with the active support of this constituency that a progressive alternative can breach the Border in any meaningful way.

The radical Protestant tradition of dissent, of involvement with the labour and republican movements, is key to unlocking the progressive potential contained within the sectarian quagmire that is the Six Counties. It is our duty, therefore, to facilitate and encourage modern expressions of this tradition, whether they are found within the trade union movement or the Progressive Unionist Party.

The progressive Left must also begin to talk about the EU in stronger language than critical or sceptical. The Left needs to win back the ground given up to the loony and fascist Right and understand the EU as a profoundly anti-democratic formation. To all but the most ideologically blind, the treatment of Greece is proof enough of the EU’s intent and purpose.