• The media took huge interest in Yanis Varoufakis's motorbike, his wife and his lack of neckties – but his important economic arguments were often ignored

Why does it fall to opinion columnists like Paul Krugman, Joseph Stiglitz, Seamus Milne or David McWilliams to offer a contrary view to misleading hyped headlines and comments that have characterised reporting of the ‘Greek crisis’?

“GAMBLING, defiant, egotistic, populist clowns” who are “more interested in lecturing the rest of Europe, rather than persuading us they can run the Greek economy”. Their “brinksmanship has reached dangerous levels” because they are “slow learners”.

These are all terms used or reported by the news media to describe the SYRIZA-led coalition government in Greece. The “lecturing” quote comes courtesy of Labour Party leader and erstwhile socialist internationalist Joan Burton.

The endless online content along with acres of print coverage have largely glossed over some critical issues of how power is wielded in Europe and by whom.

Instead, the deliberations between the Greek Government and the EU have been full of trivia, while critical aspects of the negotiations are ignored.

With the SYRIZA election victory in January, came commentary on the casual dress style of Greek Prime Minister Alexis Tsipras and former Finance Minister Yanis Varoufakis. Who knew the lack of ties could be a deal breaker in talks. Or maybe it was the cool motorbike that Varoufakis travelled on in Athens in his leather biker gear. Did you know that he has a backpack rather than a briefcase? And RTÉ Radio’s Playback seemed to think it important that we know Varoufakis’s wife on the back of his motorbike is a blonde.

As well as a motorbike, Varoufakis has a PhD in Economics. I couldn’t find any news coverage that called him Dr Varoufakis. But German Chancellor Angela Merkel frequently becomes Dr Merkel, particularly in Irish Times news coverage. Okay, maybe this is my republican paranoia conspiracy mindset at work, but could there be a distorted language of power in this news coverage?

SYRIZA, is the “Leftist”, or “far Left”, or “radical left-wing” party, depending on whether you read the Guardian, Telegraph or Newsweek respectively.

The Irish mainstream media parroted these lines but seldom do we hear RTÉ or Newstalk speak of “the right-wing Fine Gael”. No right-wing terms are used for the EU Troika or Merkel’s Christian Democrats either.

This double standard permeates the reporting of the Greek debt talks.

Throughout the negotiations, statements were routinely ignored if made by SYRIZA but casually repeated ad nauseam if made by the Troika, even when seen to be untrue.

One example is the assertion repeatedly made by Troika representatives that the Greek Government had not made proposals to them. An Irish Times editorial on 12 June, like many other news media reports, trots out this line, writing that Greece was “rejecting plans put forward by its creditors but not coming up with detailed alternatives”. 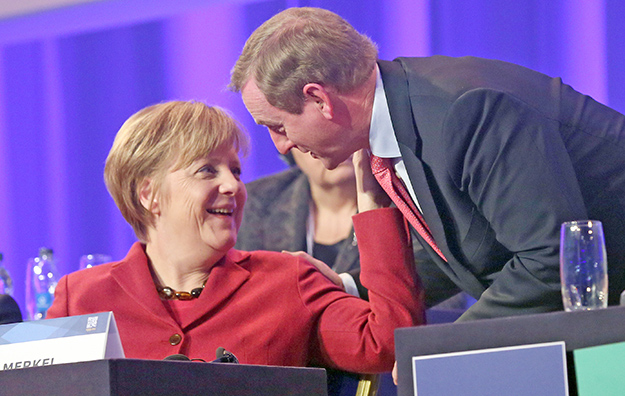 On 20 June, the Irish Times carried an article by Yanis Varoufakis where he states that he had presented detailed proposals on “a comprehensive reform agenda”, “a debt break mechanism” and “debt swaps”. Varoufakis maintains that his submissions were met with silence and the reiteration that Greece had made no proposals. This critical point has been ignored by most news media outlets, including the Times.

When Varoufakis objected to a Eurogroup communique being issued without Greek consent, he was told “the Eurogroup does not exist in law, there is no treaty which has convened this group”.

“What we have is a non-existent group that has the greatest power to determine the lives of Europeans. It’s not answerable to anyone, given it doesn’t exist in law; no minutes are kept; and it’s confidential.”

Surely this is the key element to the ‘Greek crisis’ story. The question not tackled is why do so few journalists want to tell this side of what has happened since SYRIZA took power?

Why does it fall to opinion columnists like Paul Krugman, Joseph Stiglitz, Seamus Milne or David McWilliams to offer a contrary view to misleading hyped headlines and comments that have characterised reporting of the ‘Greek crisis’?

Paul Krugman sums it up about recent media coverage of Greece:

“You need to realise that most – not all, but most – of what you’ve heard about Greek profligacy and irresponsibility is false.”

And perhaps Malcolm X was on the button much earlier when he said:

“The media’s the most powerful entity on earth. They have the power to make the innocent guilty and to make the guilty innocent, and that’s power. Because they control the minds of the masses.”