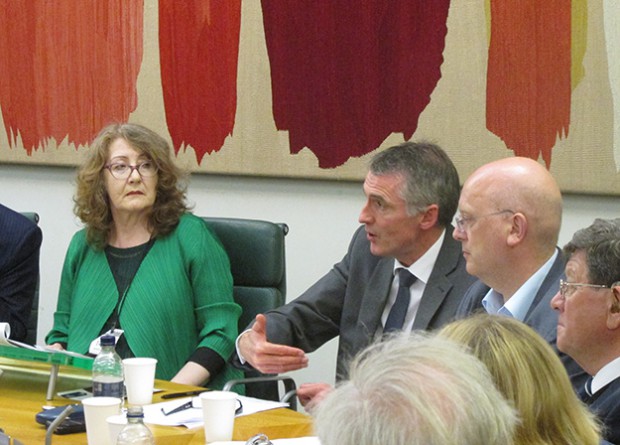 ‘Imposing austerity is not only the wrong economics, it is also dangerous for the Peace Process’ – Labour Party former Secretary of State Peter Hain

A PACKED MEETING in Westminster’s Portcullis House on 14 July heard a wide-ranging discussion, led by Sinn Féin National Chairperson Declan Kearney, on the theme “Uncomfortable Conversations – Towards a Dialogue on Reconciliation”.

Introducing the meeting, Sinn Féin MP Pat Doherty said that it was important to bring the discussion to Westminster, to put a spotlight on the need for new process of reconciliation between Britain and Ireland.

Leading off the discussion, Declan Kearney underpinned his comments with a call for a ‘Coalition for Reconciliation’.

Beginning his remarks by evoking the “unimaginable horror” of the First World War and the “colossal devastation and suffering” of the war some 30 years later, the Sinn Féin Chairperson said that “painful questions” had to be asked in the process of realising reconciliation. These are “part of the uncomfortable conversations which need to happen for reconciliation and healing to grow”, he said.

Acknowledging the “terrible devastation and human loss caused by the political conflict in Ireland and Britain” he went on to assert that “the absence of war is not in itself enough”. He urged “all of us to develop reconciliation, promote healing and to embrace forgiveness”. This “difficult and painful” challenge also meant “uncomfortable compromises” are inevitable.

Referring to the minority who “still oppose that vision”, he stressed the importance of political leadership and “symbolic initiatives” such as the recent meeting between Martin McGuinness, Gerry Adams and Prince Charles, which held “great significance” in asserting a different vision – for reconciliation.

This kind of leadership from both sides sends “a clear message to those who are hostile to this agenda”. 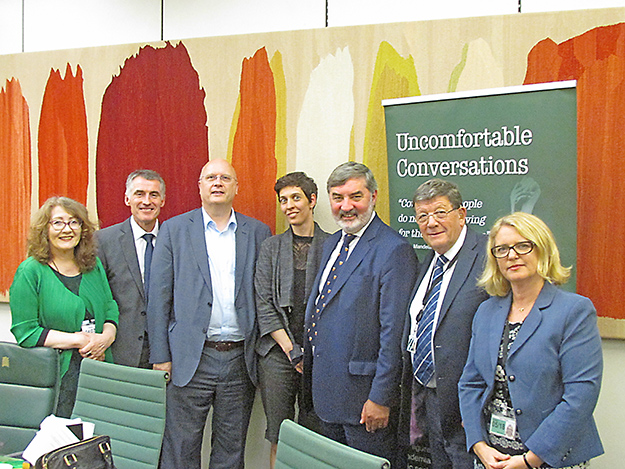 David Porter, the Archbishop of Canterbury”s Canon for Reconciliation, referred to the “essential architecture” of the work of the Consultative Group on the Past, of which he had been part and which had informed the proposals of the Stormont House Agreement.

He said the conflict “belongs to us all” and that “any progress on reconciliation will require great courage by us all”. He asserted that an “honest remembering” and “a hard telling” were prerequisites for reconciliation. He raised concern that “cultural and social loss in working-class unionism” was “expressing itself in fear”.

Former Labour Secretary of State Peter Hain said that there were serious problems with attempts to deal with the past and for victims who felt that their pain was “not recognised”. He said:

“Unless we have a comprehensive and inclusive way of dealing with the past, reconciliation may be a long way off.”

He said that difficult compromises were necessary on all sides and that while many were happy to have the results of the Peace Process, they did not want to deal with how this had been achieved.

The former Secretary of State for the North of Ireland also shared concerns of the effects of the Tory Government’s economic policies:

“Imposing austerity is not only the wrong economics, it is also dangerous for the Peace Process.”

Lord John Alderdice praised Sinn Féin and Declan Kearney for taking the initiative. He said that during the Peace Process “all of us modified our views during that experience”. Reconciliation meant dealing with “historic disturbed relationships” and, he said, whilst the law may have changed in many respects “mindsets” remained. He said it required “fundamental changes of attitudes to have a shared community”.

He said that while the current argument over welfare is “legitimate”, the political institutions “cannot be hostage to this”.

A broad and stimulating discussion from the floor raised a myriad of issues, including the impact of the failure to deal with discrimination, the effects on young people emerging from a post-conflict society, the role of schools and education, how economic policy affects the peace, dealing with mental heath and the inter-generational problems arising from conflicts, the situation for current prisoners, and the need for political parties to show leadership.

“We need economic and social scaffolding to build a process of reconciliation.”

He concluded by  underlining his call for a ‘Coalition for Reconciliation’.

The process of ‘Uncomfortable Conversations’ is set to continue.