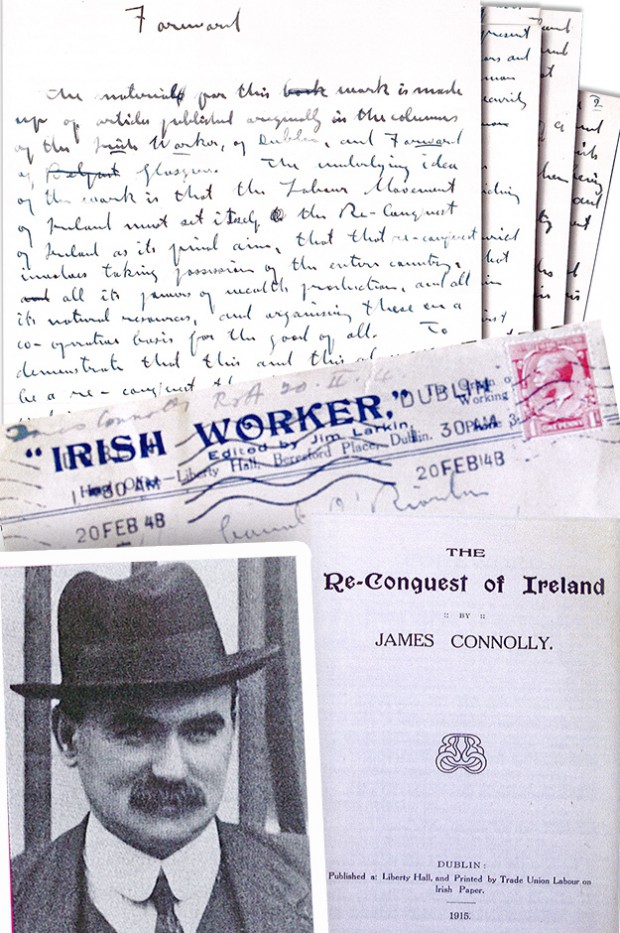 • DURING 1912 and 1913, when it seemed that Home Rule for Ireland would come about, James Connolly was working on his vision of how the trade union movement could bring about a new society. This work was expanded and became a book which Connolly published

Connolly put special emphasis on both Dublin and Belfast, showing how, in the latter city, sectarianism was used to divide workers

DURING 1912 and 1913, when it seemed that Home Rule for Ireland would come about, James Connolly was working on his vision of how the trade union movement could bring about a new society. This work was expanded and became a book which Connolly published in 1915 and called The Re-conquest of Ireland. It is a major statement, setting out many of Connolly’s key ideas.

Building on his earlier book, Labour in Irish History (1910), Connolly briefly described the political, social and economic conquest of Ireland and then went on to look at the conditions of the day and how they could be transformed. He described life for industrial and agricultural workers, the status of women and the need for a revolution in Irish education.

He put special emphasis on both Dublin and Belfast, showing how, in the latter city, sectarianism was used to divide workers. On the centenary of the book, we carry here some key extracts.

Let it be remembered, then, that the conquest was two-fold – social and political. It was the imposition upon Ireland of an alien rule in political matters and of a social system equally alien and even more abhorrent . . .

The Catholic dispossessed by force, the Protestant dispossessed by fraud. Each hating and blaming the other, a situation which the dominant aristocracy knew well how, as their descendants know today, to profit by to their own advantage.

Dublin in the 20th Century

Thus the high death-rate of Dublin is seen to be entirely due to economic causes, to rise and fall with economic classes.

The rich of Dublin enjoy as long an immunity from death as do their kind elsewhere; it is the slaughter of Dublin’s poor that gives the Irish metropolis its unenviable and hateful notoriety among civilised nations.

Belfast and its Problems

Our shipyards offer up a daily sacrifice of life and limb on the altar of capitalism. The clang of the ambulance bell is one of the most familiar daily sounds on the streets between out shipyards and our hospitals.

It has been computed that some 17 lives were lost on the Titanic before she left the Lagan; a list of the maimed and hurt and those suffering from minor injuries as a result of the accidents at any one of those big ships would read like a roster of the wounded after a battle upon the Indian frontier.

In Ireland, that female worker has hitherto exhibited, in her martyrdom, an almost damnable patience. She has toiled on the farms from her earliest childhood, attaining usually to the age of ripe womanhood, without being vouchsafed the right to claim as her own a single penny of the money earned by her labour, and knowing that all her toil and privation would not earn her that right to the farm which would go without question to the most worthless member of the family, if that member chanced to be the eldest son . . .

In its march towards freedom, the working class of Ireland must cheer on the efforts of those women who, feeling on their souls and bodies the fetters of the ages, have arisen to strike them off, and cheer all the louder if in its hatred of thraldom and passion for freedom the women’s army forges ahead of the militant army of labour.

Schools and Scholars of Erin

Where the democracy, functioning through a representative public body, would supply a competent staff of well-paid teachers, and splendidly equipped, heated and lighted buildings, the present system of despotically-controlled education gives us a staff of wretchedly-paid teachers with no rights but with duties continually increasing.

Re-conquest – A Summing Up

As democracy invades and captures public powers, public ownership will, of necessity, be transformed and infused with a new spirit. As democracy enters, bureaucracy will take flight. But without the power of the industrial union behind it, democracy can only enter the state as the victim enters the gullet of the serpent . . .