Julia Carney is back 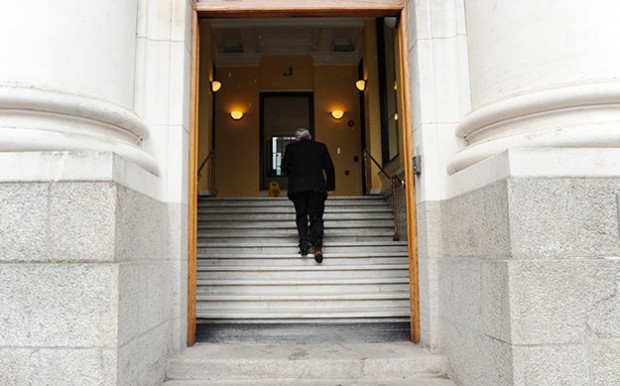 • The man himself – 'The Greatest Political Thinker of Our Times'

For more than 30 years he had, without exception or doubt, been The Smartest Person In Every Room

THE Greatest Political Leader Ireland Has Ever Known sat quietly in a run-down basement on Hill Street in Dublin’s north inner city.

But it didn’t bother him.

In many ways, he had always been alone.

For more than 30 years he had, without exception or doubt, been The Smartest Person In Every Room. It had been difficult to make friends, impossible to keep them. So few, so very few, were capable of appreciating his insight, his grasp of nuance, his helter-skelter leaps of logic, his subtlety and his wit.

Ah yes, they’d loved his wit. The journalists, you know. They always laughed at his little jokes, his little ventures into humour, even if he was never sure they quite understood them, quite grasped the undertones, the delicate turns of phrase. Still, they had amused him too, in their own way and, at least, he could avoid them with ease.

It was the others he held in contempt – the men and women he had been forced to work alongside for half his life.

He frowned. Not forced. Not really. He had, after all, volunteered for this task knowing he was The Best Person For The Job, his sacred mission.

But, still, he had hated it. For most of his adult life he had sat in rooms, big and small, rich and poor, surrounded by fools and cowards and cretins.

He had to listen to them, to feign interest, to nod soberly and seriously at ideas characterised by contradiction and confusion.

The man in the basement room in Hill Street chuckled to himself. That they could have sat next to him for so long and never grasped quite how deep his contempt for them went, could never have understood his purpose, why he said the things he said, had done the things he had done only showed they fitted their fate.

The door to the basement opened and the man looked up as Seán Garland walked into the room.

The man did not have any heroes. How could he? How could The Greatest Political Thinker of Our Times have heroes?

But he respected Garland. He acknowledged a man whose commitment was only less than his own because, to be fair, the man was his intellectual inferior.

Here, after all, was the anointed and thrice-blessed Ambassador Plenipotentiary from the Democratic People’s Republic of Korea, the one who had first revealed to the man the Principles of Juche as laid out by the Great Leader, Kim Il-Sung.

Garland knew that De Rossa, Gilmore and the others would betray the great dream of building an Ireland founded on the principles of Juche, an Ireland where happy and well-fed children could grow tall and strong under the wise and gentle guidance of the Workers’ Party.

He knew they would attempt to force a split in the party, claiming outrage as they discovered that the Workers’ Party retained an armed wing. Which it did not. And which, of course, it simultaneously did.

A student of Juche, the man reflected, could think two completely contradictory things at the same time, believing in both with equal passion, with the same fervour.

It was a talent that had been of no small use to him throughout his decades in the Irish Labour Party.

That was why Garland had chosen him, The Most Loyal and Committed Socialist Since Connolly Himself, to go with the traitors, to speak and act as one of them, to ape their beliefs and their habits.

Garland knew that empty men – those lacking courage or ideals, principles or beliefs – find each other and come together. And so De Rossa and Quinn found each other, and came together as those who had fled the Workers’ Party merged with Labour. And he had been right there with them.

It was too good an opportunity to miss. Along with those who had forsaken the Workers’ Party went the man in the basement room. One man, one Exceptional and Brilliant Man, A Hero of the Revolution, who was not what he seemed, whose loyalty never wavered.

His goal, his seemingly impossible task: to destroy the Irish Labour Party from the inside, to shred its credibility, its self-respect and its principles. To see its once-proud name dragged through the gutters, to hear it cursed and mocked in every corner of the land, to watch its former supporters turn their faces away in shame.

And once that was done, and only then, could Pat Rabbitte’s lifelong work be accomplished. Only then could he stand in that basement on Hill Street and shake Seán Garland’s hand.

Only now can The Greatest Double Agent in History smile a genuine smile and permit, briefly, a real emotion to appear. For now, with the Labour Party disposed of, there was nothing that could stop the inevitable march to power of the Workers’ Party.