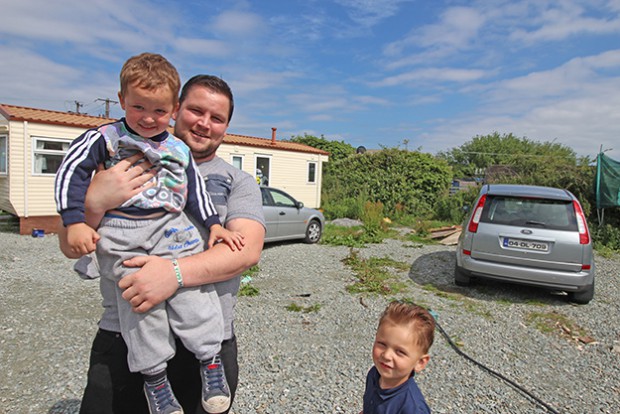 • John at his family's campsite in Darndale

I MEET JOHN CONNORS at a hotel just up the road from his home in Darndale, on the northside of Dublin City. “There’s a great sense of community in Darndale. There’s so many beautiful people here,” John says. The housing estate is currently the focus of TV3’s reality show, Darndale: Edge of Town.

Born in London, John’s parents moved back to Ireland when he was just a year old and since then he has lived all his life in the Darndale and Coolock area.

While he might now be best known for his role as ganster Patrick Ward in the hit TV series Love/Hate, John has been active in supporting the campaign for Travellers to be recognised as a distinct ethnic group in Ireland, something that has been urged by the Human Rights Commission with pressure also coming from the UN Human Rights Committee and the Council of Europe.

Going back to his childhood, John tells me he “had a bit of a rough time” but not from settled kids really.

“There was a fairly large number of Travellers in my school. Some of it came from teachers. One of them even said to me: ‘You smelly little knacker. If you ever raise your voice in this class again, I’m gonna kill you.’ I told the Principal but they didn’t believe me.Them type of things made me very angry.”

John says the way Traveller children were treated in education was appalling.

“I did very well in exams and was pretty bright, but when we went into senior school we were put into an all-Traveller class and we were given books that we read in Junior Infants. I’ll never forget the name of that book Huggy Bear. We were like ‘What the fuck?’

“We were quickly put back in with the regular class but those kind of things stay with you. I’m only 25 and it’s still going on in some schools. It’s segregation, and that was something that fuelled anger for me.” 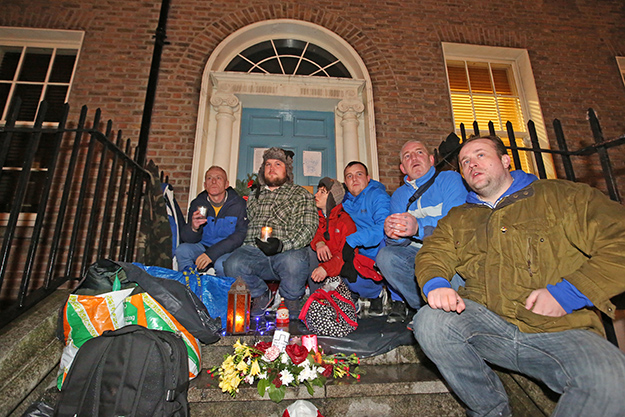 As we arrive at the camp, some young Traveller boys are busy running around playing with a ball in the yard. Two small dogs are trying to join in while a rooster looks on warily from beneath the ledge of a nearby caravan. John goes over to talk to the boys, asking them how they’re getting on.

When he was just eight years old, John’s own father (also named John) took his own life. Suicide is a huge issue within the Travelling community with suicide rates six times higher than that of the settled population:

“There’s many different reasons and there are parts of Traveller culture that contribute to the high suicide rate,” says John, “but when you are from a community that is marginalised and ostracised all your life, that certainly adds to it. And when you’re never welcomed by the vast majority of people, well that takes its toll on your mental health. I think ethnicity recognition is a first step, then we need some sort of scheme to address Traveller mental health.”

He says that the discrimination he faced as a child left him with a lot of anger towards settled people.

“My father used to always bring me and my brothers to the Stardust Memorial Park on nice days, and after he died my mother continued that tradition. I remember one day we went and were having some chips, sitting on the grass and these slightly older lads started pegging stones at us and calling us ‘knackers’. What that does is it fills you with alot of anger against settled people. It gives you the same attitude that some settled people have towards you – tarring them all with the one brush. And I had that attitude for quite a bit of time,” he admits.

He says that, much like Native American culture, there is a stigma in Traveller culture attached to boys who do not have a father growing up. He says this attitude angered him and eventually led to him becoming  a bare-knuckle boxer.

His bare-knuckle boxing would stand to him when he starred in the movie King of the Travellers. Initially only going for minor parts, he ended up being chosen as the lead role. He explains how his interest in film-making and production led to him looking to acting.

“I was suffering with depression at the time and the acting was very cathartic. I think my family could see the acting made me happy and they were very supportive.” 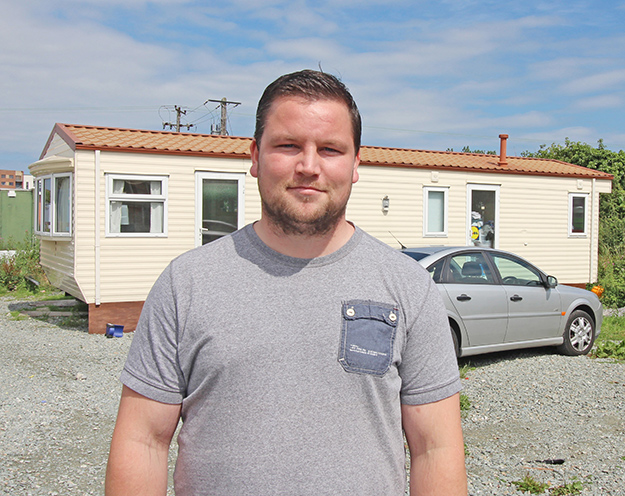 Oscar-nominated director Jim Sheridan has since tipped him for Hollywood fame.

Following his role in Love/Hate, the everyday racism, such as being refused entry to pubs, largely disappeared.

He praises the RTÉ series for its authenticity in portraying some aspects of Traveller life.

“Yes, I was playing a Traveller who is a gangster in Love/Hate. But everybody else in it is a gangster too. So I was okay with that. Love/Hate did it the best in terms of nailing the culture and we were even using Gammon [Traveller language, also known as Shelta] without subtitles. It was so authentic.”

John says its important that Traveller culture is defended in its entirety – and says some who seek to present a sanitised version make it acceptable to settled people are doing a disservice to their own community. He describes them as “almost ‘Uncle Tom’ like” by condemning or denying things like bare-knuckle boxing but he accepts there are problems involving Traveller feuds amongst a handful of families. He tells me that as a bare-knuckle boxer himself, he almost always went for a pint with his opponent afterwards and there was no lasting animosity.

He’s strongly critical of the tabloid media for its vilification of Travellers, describing the attitude to Travellers as “the last acceptable racism in Ireland”.

“Last summer there was more tabloid coverage on Travellers and feuds between two or three families than on the war in Gaza. It’s ridiculous. They know Travellers are an easy target because there’s not too many speaking up for them.” 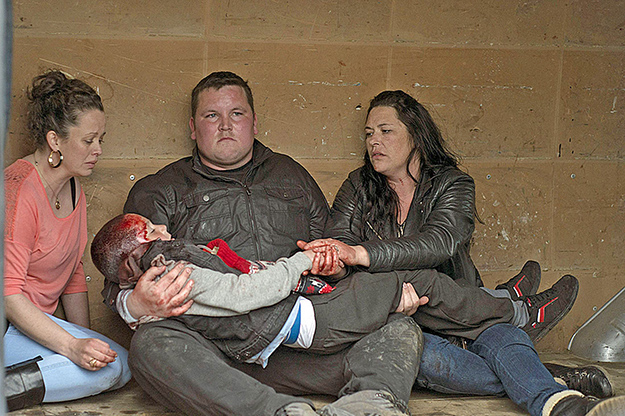 John eventually decided to tackle the media head on:

“I really tried after Love/Hate to represent Travellers in a positive way, and tell the truth. But it backfired on me and I realised you can’t win with these people. They don’t give a fuck about the truth – it’s about juicy headlines and they will sensationalise any way they want and put a quote in any context they want. In terms of mainstream media and tabloid media – I’ve kind of stayed away from it now because it’s been very damaging and I’ve had my family being upset by some of the articles and how they twisted what I said.”

John received over 1,500 online hatemails after speaking out, while others claimed – because he’s an actor – that he isn’t really representative of Travellers. “I was brought up on a camp site, not even a halting site. We had no running water or electricity. I fought bare-knuckle boxing. I’ve never been removed from my culture.”

Recently, John met with Sinn Féin leader Gerry Adams TD in the Dáil on the issue of Traveller ethnicity, something the party has been active on. He thinks it unlikely the current Fine Gael/Labour Government will do anything.

“I don’t have a lot of hope because a lot of things will have to happen if we get ethnic status, particularly a commitment to protect our culture, and I don’t think they want to do that.”

He points to the state’s previous attempts to deal with Traveller issues via the 1963 Commission on Itinerancy:

“The stated aim was to liquidate our culture and absorb us into the settled community. Now that sounds like some Nazi Germany shit.

“Pádraig Mac Lochlainn (the first TD from a Traveller background) said many times that ethnicity recognition isn’t going to change anything overnight but it gives us a good building block and hope.”

A 2011 study by the Royal College of Surgeons in Dublin and the University of Edinburgh showed that the DNA of Travellers is distinct from that of the settled population. It points out that Travellers have been largely separated from the settled community for almost 1,000 years.

John feels Traveller history has largely been written out of the narrative of Ireland through a combination of ignorance and racism.

“My great-grandfather, Patrick Ward, fought in the 1916 Rising,” says John proudly. “He was a staunch republican and was on the anti-Treaty side during the Civil War. He did a year in Kilmainham Jail. In 1942 he settled in a field in Athlone and was accused of snaring rabbits by a local landowner.”

Newspaper reports at the time tell how local man Jospeh Lee stormed down to the Traveller camp, brandishing a shotgun. As Patrick Ward stood up from beside the camp fire to go speak to the man, he was shot dead.

An Irish Press article at the time reports the killer telling gardaí: “I have shot a tinker dead this morning. I lost my head. What am I going to do?” Charged with murder, he served only six months in prison after being found guilty of manslaughter.

“If you killed anybody else you’d have done a lot more than six months,” notes John earnestly.

He says that while racism in the past was more severe, today it is more common and casual. Education is a way to overcome that, with John pointing to the key roles Travellers played in ensuring traditional Irish music and stories have survived to the present.

“As a Traveller going into the education system you feel like you have to change your accent or lie about where you’re coming from because there is a feeling of shame.

“Travellers have played their part in all aspects of Irish history. I’d love to see a situation where Traveller history and culture are taught in a classroom, and Traveller kids feel proud of that and their settled classmates do too.”

John Connors will appear in upcoming feature film, Float Like a Butterfly, while his own film, Cardboard Gangsters, is currently in production. RTÉ confirmed a sixth series of Love/Hate is 'in development' but will not return before 2016