Shocked, disorientated and in mourning

From Athens, Eoin Ó Broin reports on the mood in Greece

One older woman told me that, despite her frustration and anger, she would remain with SYRIZA and with Tsipras because that was ‘the country’s only hope’

THE WISDOM OF TAXI DRIVERS is almost universal, and Athens is no exception.

Again and again, taxi drivers told the same story. They rubbished the deal imposed on Greece by her creditors but believed that Alexis Tsipras was their best hope.

Three weeks after capital controls were introduced there was little sign of disruption to daily life in Athens. Shops were displaying 50% sale signs “for as long as the banks are closed”. Some ATMs had queues, though many didn’t.

But beneath the surface, people were shocked, disorientated and in a state of mourning. These three words were repeated over and over again by people, particularly those in or close to SYRIZA.

In the Athens University Law School, from 16 July, a few hundred radical left-wing activists gathered for the Democracy Rising conference organised by the Global Centre for Advanced Studies.

The weekend-long series of discussions was planned back when the post-election optimism was riding high, both in Greece and abroad. The event was to be an exploration and celebration of the rising power of popular alternatives to neo-liberalism and austerity,

But after the humiliation of the Greek Government and people at the European Summit on 12 June, there was only one question preoccupying the delegates – whether to remain within the euro and the Troika deal – making the best of a bad situation – or take a leap of faith into the unknown of an exit from the single currency.

Much of the conference carried on as planned but the issue of whether the Government was right or not to accept the outcome of the summit was ever-present. 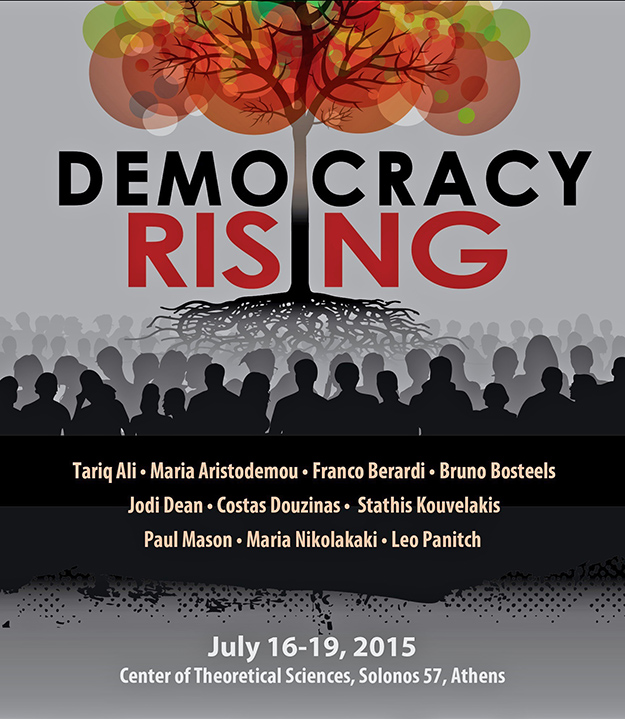 Some activists described Alexis Tsipras’s acceptance of the Troika deal as ‘betrayal’. Others understood that the conclusion of the negotiations was the result of a balance of forces that pitted one small, weak and cash-strapped government against the rest of the Eurozone.

The overwhelming majority from both sides of the debate urged calm and called for party unity in the time ahead.

But unity behind what was not exactly clear.

Probably the most powerful debate of the conference was on Friday evening. There, two leading figures of the Greek intellectual Left, Costas Douzinas and Costas Lapavitsas, went head to head on the issue of the deal.

Douzinas, a London-based law professor and strong Tsipras supporter, described the mood among activists as one of “mourning after a heavy defeat”. But he urged unity and, quoting Samuel Beckett, encouraged activists to stay united to “try again, fail again but fail better”.

Lapavitsas, the former London-based economist and now SYRIZA MP, spoke about things “being as they seem”. The long-time advocate of Greek withdrawal from the euro argued that it was impossible to break with austerity from within the single currency.

The debate from the floor was tense, heated and long. Some international observers described it as cathartic.

The big question however was whether SYRIZA could remain united in the face of such strongly-held and diametrically-opposed views. Douzinas and Lapavitsas thought so. Many others remained unconvinced.

On Saturday evening, during an even longer debate on the state of the European Left after the European summit deal, SYRIZA Central Committee member Stelios Elliniados gave his own frank assessment of what went wrong.

He talked about a lack of democracy within the party and a lack of preparedness for the challenge of Government. He also spoke about the absence of any real plan for either staying in or exiting the euro.

Crucially, he told delegates that SYRIZA had underestimated their opponents and overestimated the values on which the EU is supposed to be based.

His contribution provoked an explosion of angry questions with one older woman – who described herself as “just an ordinary SYRIZA voter” – almost painfully demanding to know why she was only being told all of this now.

After the discussion, the same woman told me that, despite her frustration and anger, she would remain with SYRIZA and with Tsipras, because that was “the country’s only hope”.

Everywhere you went there was the same conversation and the same range of emotions. 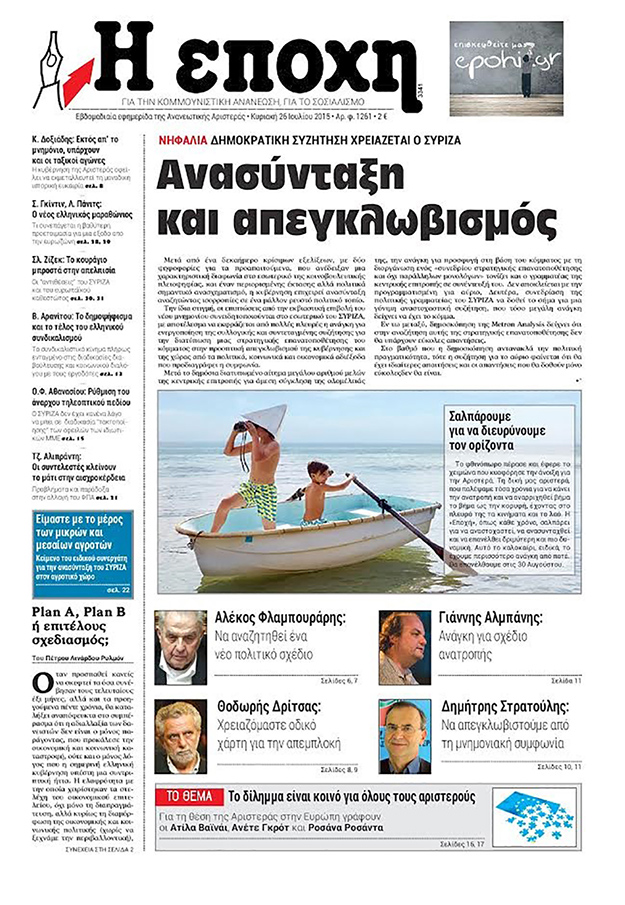 On Friday, I visited the offices of the weekly left political newspaper, Epoch. The widely-respected pro-SYRIZA publication gives voice to the main Left bloc within the party, including the current Finance Minister, Euclid Tsakalotos.

Older activists within the newspaper sought to buy time. They spoke about staying in Government and the euro. Their hope was for more anti-austerity governments to emerge in the coming months, strengthening the hand of those who sought change within the euro.

They also talked about the need to develop a plan for exiting the euro if a second round of negotiations at the EU level failed.

They wanted a general debate within the party to agree a position in advance of snap elections. Reflecting the formal position of the youth wing of SYRIZA, they wanted the party to reject the new bailout deal and to seek an electoral mandate for Grexit.

Remarkably, the debate at Epoch was calm, comradely and constructive. Both sides agreed on the need for party unity. A split, they all argued, would set the Greek Left back a generation.

During a number of private meetings with senior figures within SYRIZA over the weekend, a number of observations were made over and over again – irrespective of whether the conversations were with those supporting Tsipras or those against.

The first was that people are genuinely shocked at how the Greek Government has been treated within the EU negotiations.

People at all levels genuinely believed that rational arguments at the European Council could and would prevail.

Their experience, however, had left their faith in the idea of an EU of equals badly shaken.

One senior activist close to the negotiations spoke about how, week after week, their “partners” kept moving the goalposts. Within a few months it became clear that their EU neither wanted to negotiate nor to secure a deal – they were intent on imposing a humiliating defeat.

The second was that, despite initially believing that alliances with more sympathetic governments could be built, the Greek Government realised very quickly that they were effectively on their own on the EU stage.

For those who believe that Greece must remain within the euro, a lot of store is now being placed on the election of anti-austerity governments in Spain and possibly even Ireland.

Thirdly, everyone spoke of a lack of preparedness for Government – at both the domestic and EU level. Some activists spoke of underestimating the role of the ‘permanent government’ within the Greek state limiting the effectiveness of their ministers.

Others highlighted the gap between the Government, the party activists and the people. Everyone agreed that they read the intentions of their EU so-called partners wrong.

The historic SYRIZA election victory in January 2015 was the first real challenge to the status quo within the EU. It was a clear rejection of the failed policies of bank bailouts and crippling austerity. The demand for a better way now had a democratic mandate.

The response of the EU and IMF was swift and harsh. Greece would not only continue on the road its voters had rejected but would be punished for daring to think that a better way was possible.

When the Greek people surprised even their own government by rejecting the Troika deal by 61% in the July referendum, the EU returned with a deal that was even worse.

The choice now facing the Greek people and their government is stark – remain within the euro and the terms offered by Brussels and Frankfurt or exit the euro. Neither option is risk free.

Alexis Tsipras has made his position clear. Greece will remain within the single currency and continue to struggle for a better deal than that currently on the table.

Judging by the opinion polls, he has the support of the majority of the electorate. However, the opposition to his chosen course, both within his own parliamentary party and the broader party base, means that the future of SYRIZA is not guaranteed.

More importantly, the intransigence of the EU institutions – Council, Commission and Central Bank – means that Greece’s membership of the euro is also no longer guaranteed.

Greece, like Ireland, has long been one of the strongest advocates of the EU and Eurozone. But the standing of the EU institutions has taken a battering among ordinary Greek people.

Though Greek society may not be prepared to exit the single currency just yet, even those on the most pro-EU wing of SYRIZA are now asking themselves whether they would be better off outside the euro.

The only conclusion that can be drawn with any certainty in regard to recent events in Brussels and Athens is that the crisis of the Eurozone is far from over.