The Hooded Men – Revealing the truth behind the torture 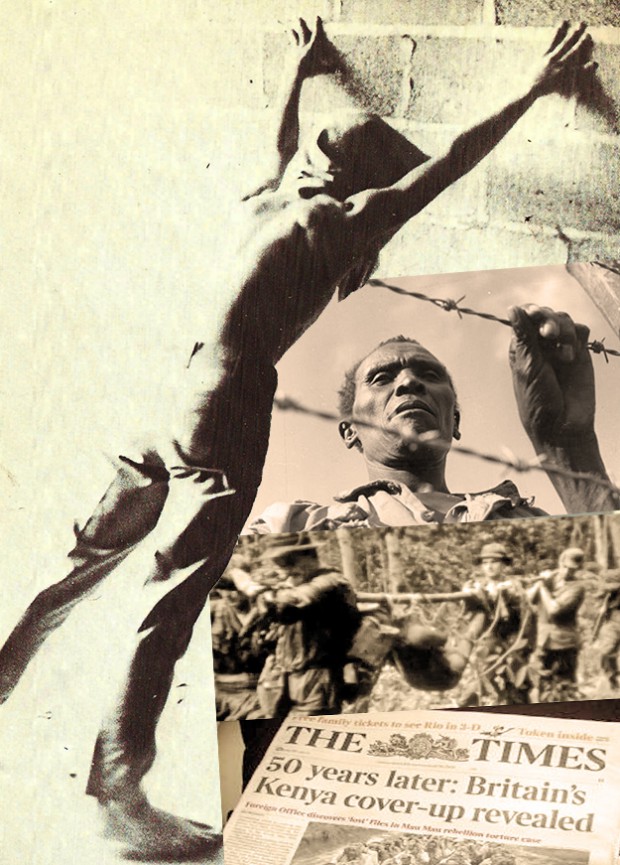 WHEN An Phoblacht’s PEADAR WHELAN reviewed Collusion, the special feature-length RTÉ television documentary broadcast on 15 June, he concluded that for people to fully understand the implications of collusion between the British Government, the British Army, British Intelligence and RUC and unionist death squads, they must look at the “thread of continuity” that runs through successive British administrations, the Civil Service and the Intelligence services as well as the judicial and legal apparatus.

In June, the remaining 12 of the 14 nationalists known as ‘The Hooded Men’ were given leave by the High Court in Belfast to seek a judicial review against the British Government and the PSNI Chief Constable over their failure to properly investigate their case and order a full inquiry.

Peadar Whelan now contends that to fully grasp the implications of an open inquiry into the treatment of those detained during the British Army’s Operation Demetrius in 1971, it is crucial to look at it in the “historical continuity” of British colonial practice in suppressing national liberation movements, particularly in Kenya, Malaya, Aden and Cyprus. 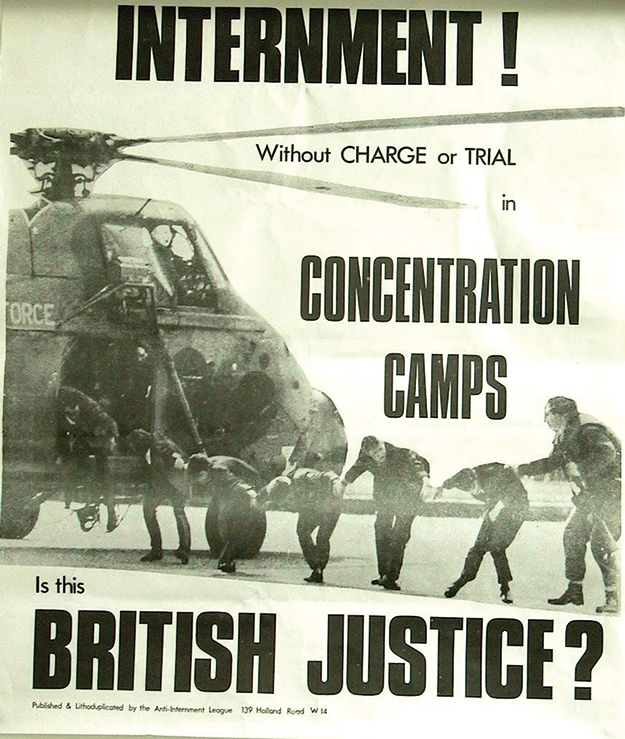 • Internment was Britain's usual tactic to deal with republicans

The end of ‘The Honeymoon Period’

As the conflict in the North intensified through 1970 and 1971, especially after the Falls Curfew when more than 3,000 British soldiers were deployed to seal off and search the Lower Falls area of Belfast, the British Army went from being hailed by the media as “protectors” of the beleaguered nationalist population to being aggressors and oppressors.

During the operation, the British military killed four men, wrecked scores of homes and arrested dozens of residents, leading to the end of the ‘honeymoon period’ when “squaddies were welcomed with tea and biscuits”.

A resurgent IRA, with popular support, was fast becoming a bulwark defending nationalists from the worst excesses of state forces and their unionist mob and paramilitary allies.

Against a background that saw the IRA setting the political agenda, there were demands from within unionism and from the British Right for action to defeat the IRA.

Given the success of internment in the decades since partition, when it was employed simultaneously by both unionist and Dublin governments, it became clear that the arrest and imprisonment of nationalist ‘suspects’ without charge or trial would happen.

In his seminal book Beating the Terrorists, on the treatment of nationalists in the North’s interrogation centres, BBC journalist Peter Taylor wrote: “Internment, the measure that had always contained the IRA in the past, was inevitable.”

In April 1971, months before the August raids, a secret meeting was held in Belfast which involved senior British Intelligence officers and their counterparts in RUC Special Branch.

“The purpose of the seminar,” according to Taylor, “was to discuss the most effective way of obtaining vital intelligence on the IRA which the RUC had failed to gather using their traditional methods.”

Taylor maintains that the British officers present were from the “top secret” English Intelligence Centre (EIC).

“The EIC was the storehouse of the experience the British had gained in counter-insurgency operations in her colonies in the post-war [Second World War] years.”

The interrogation techniques used in Kenya, Malaya, Cyprus and Aden were never published or written down. The EIC received and transmitted them orally to the interrogators who put them into practice.

The so-called ‘Five Techniques’ at the heart of the interrogation methods consisted of:

These methods induced sensory deprivation and were designed to break detainees psychologically with the minimum use of violence and brutality. 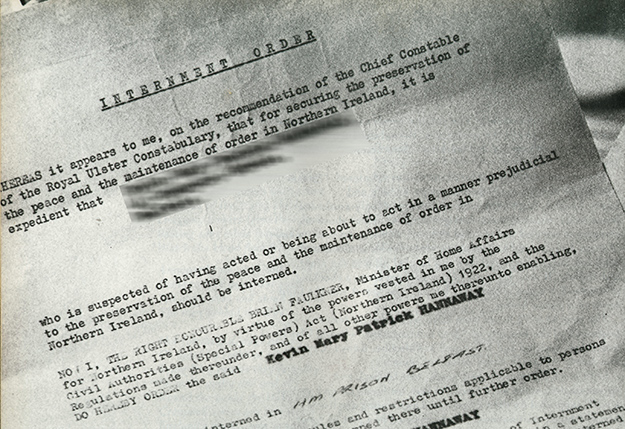 As British Army units swept into nationalist areas in the early hours of 9 August 1971, Operation Demetrius was under way. Hundreds of nationalist men were dragged from their homes and frog-marched off to detention centres, where they were subjected to intense interrogation by British military and RUC Special Branch inquisitors.

Fourteen of the detainees were taken away for what has been labelled as “interrogation in depth” by none other than the British Prime Minister of the day, Edward Heath, and were airlifted to the British Army’s main base in County Derry, Shackleton Barracks in Ballykelly.

On arrival at Ballykelly the men were thrown from still-flying helicopters, thinking they were falling to their death only to find they were just feet from the ground.

After running a gauntlet of attack dogs and baton-wielding troops, they were stripped and interrogated.

While the main focus of the Irish Government’s case was the treatment of ‘The Hooded Men’ or the ‘The Guinea Pigs’, the conveyor belt of arrest and interrogation continued in the notorious British Army base at Palace Barracks in Holywood, County Down.

As many as 3,000 detainees were systematically interrogated by RUC Special Branch and Military Intelligence operatives in the year after the introduction of internment.

In an interesting conclusion, Peter Taylor maintains that Palace Barracks was “Northern Ireland’s first interrogation centre and the blueprint for Castlereagh”, the ‘holding centre’ that became synonymous with the ill-treatment of suspects in the late 1970s.

Two of the senior Special Branch officers in charge at Palace Barracks (including one who was present at the secret seminar involving the EIC in April 1971) are believed to have been promoted and deployed in Castlereagh. 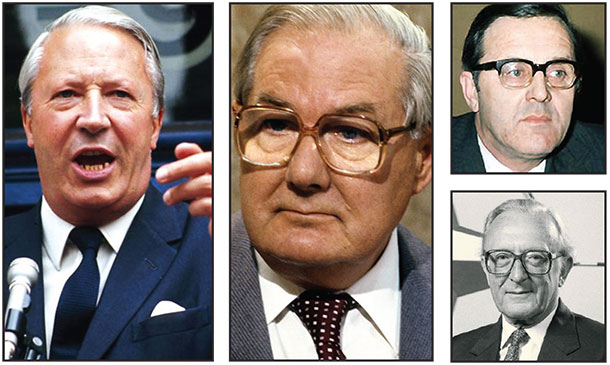 In 1976, the European Commission found Britain guilty of torture, a decision the British Government of the day – a Labour administration – appealed.

In 1978, the European Court ruled that the interrogation methods used by Britain were “inhuman and degrading” but did not amount to torture.

Despite their denials, evidence has emerged that shows senior British politicians sanctioned the use of the five techniques and, in effect, the torture of detainees.

Ironically, while serving as Home Secretary in the Labour Government that was appealing the torture verdict of the European Court, Rees wrote to Prime Minster Callaghan stating:

“It is my view [confirmed by Stormont unionist Prime Minister Brian Faulkner before his death] that the decision to use methods of torture in Northern Ireland in 1971/72 was taken by ministers, in particular Lord Carrington, then Secretary of State for Defence.”

The dogged pursuit by the remaining ‘Hooded Men’ of an inquiry into their treatment at the hands of British interrogators has echoes in a court case which began in April 2011 when four Kenyans who, according to their solicitors Leigh Day & Co, “suffered grave acts of torture at the hands of British officials during the Kenya Emergency in the 1950s and 1960s”.

In 1957, the British colonial administration subjected detainees to a form of torture known as the “dilution technique”, a regime of systemised violence which was, according to Leigh Day & Co, “approved at the highest levels of the British Government”.

Central to their case is the discovery of 1,500 files, documenting the suppression of the guerrilla camapign by the Kenya Land & Freedom Army (aka the Mau Mau rebellion) in the African state. This huge cache of evidence was flown out of Kenya by the British Government just days before independence in a move seen as an attempt by Whitehall officials and politicians “to protect the guilty”.

Clearly, the British Government will do what it can to protect “the guilty”, the interrogators who tortured detainees, in the way they continue to protect those behind collusion.

The consequences of the European Court’s ruling that ruled that the ‘five techniques’ did not amount to torture went beyond Ireland. 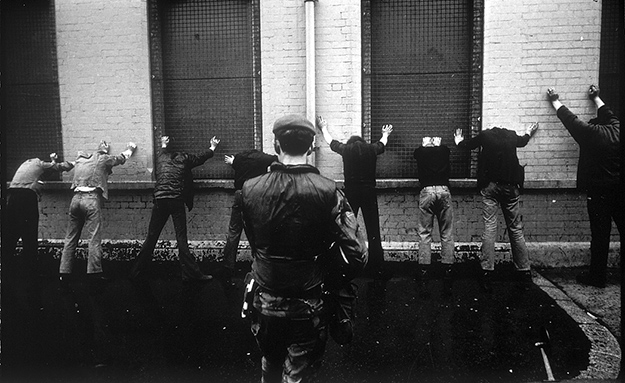 Also in June 2014, the International Criminal Court launched a preliminary investigation into a complaint brought by Public Interest Lawyers UK and the Berlin-based European Centre for Constitutional and Human Rights into allegations of the British Army torturing 412 Iraqis with the ‘five techniques’ used in Ireland in the 1970s.

Despite the British Government’s undertakings, made in the aftermath of the 1976 European Court ruling, that its forces would not use the ‘five techniques’, the empirical evidence indicates that these promises were not worth the paper they were written on.

The ill-treatment of detainees in Castlereagh, Strand Road in Derry and Gough Barracks in Armagh are proof of that.

The tenacity of ‘The Hooded Men’ in forcing the Dublin Government to apply to the European Court of Human Rights to revisit its 1978 decision in light of newly-discovered files and their success in the Belfast High Court sends a message to the British that the veil of secrecy they are hiding behind is being ripped apart. Its colonial war tactics, with collusion and torture as their cornerstone, are being exposed for the world to see.