'Can you hear the people sing?' 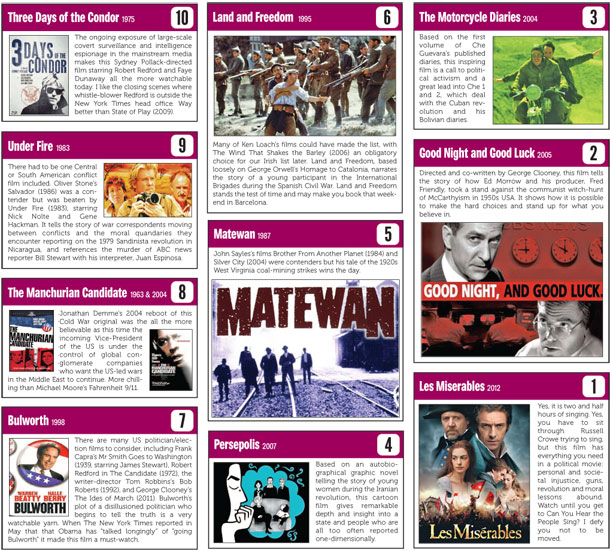 WITH THE WEATHER indifferent to the best-planned holidays, the TV becomes our guilty fallback in what passes for the summer months in Ireland. What if you could put those wet days to commendable use watching the most important political films of our time? Even if it’s sunny, it can be good fun to deepen your political wisdom, spending a few hours where good momentarily triumphs.

The criteria for this list are firstly that there are no documentaries – they are too easy to pick and constitute another category. I’m excluding films about Ireland as this definitely will be a follow-up article. Also, no box sets or made-for-TV productions like The West Wing, House of Cards or Borgen. After that, the following selections have been based solely on the empirical data of personal whimsy.

Read on and email me at [email protected] to disagree if you dare.

The ongoing exposure of large-scale covert surveillance and intelligence espionage in the mainstream media makes this Sydney Pollack-directed film starring Robert Redford and Faye Dunaway all the more watchable today. I like the closing scenes where whistle-blower Redford is outside the New York Times head office. Way better than State of Play (2009).

There had to be one Central or South American conflict film included. Oliver Stone’s Salvador (1986) was a contender but was beaten by Under Fire (1983), starring Nick Nolte and Gene Hackman. It tells the story of war correspondents moving between conflicts and the moral quandaries they encounter reporting on the 1979 Sandinista revolution in Nicaragua, and references the murder of ABC news reporter Bill Stewart with his interpreter, Juan Espinosa.

Jonathan Demme’s 2004 reboot of this Cold War original was the all the more believable as this time the incoming Vice-President of the US is under the control of global conglomerate companies who want the US-led wars in the Middle East to continue. More chilling than Michael Moore’s Fahrenheit 9/11.

There are many US politician/election films to consider, including Frank Capra’s Mr Smith Goes to Washington (1939, starring James Stewart), Robert Redford in The Candidate (1972), the writer-director Tom Robbins’s Bob Roberts (1992), and George Clooney’s The Ides of March (2011). Bulworth’s plot of a disillusioned politician who begins to tell the truth is a very watchable yarn. When The New York Times reported in May that that Obama has “talked longingly” of “going Bulworth” it made this film a must-watch.

Many of Ken Loach’s films could have made the list, with The Wind That Shakes the Barley (2006) an obligatory choice for our Irish list later. Land and Freedom, based loosely on George Orwell’s Homage to Catalonia, narrates the story of a young participant in the International Brigades during the Spanish Civil War. Land and Freedom stands the test of time and may make you book that weekend in Barcelona.

John Sayles’s films Brother From Another Planet (1984) and Silver City (2004) were contenders but his tale of the 1920s West Virginia coal-mining strikes wins the day.

Based on an autobiographical graphic novel telling the story of young women during the Iranian revolution, this cartoon film gives remarkable depth and insight into a state and people who are all too often reported one-dimensionally.

Based on the first volume of Che Guevara’s published diaries, this inspiring film is a call to political activism and a great lead into Che 1 and 2, which deal with the Cuban revolution and his Bolivian diaries.

Directed and co-written by George Clooney, this film tells the story of how Ed Morrow and his producer, Fred Friendly, took a stand against the communist witch-hunt of McCarthyism in 1950s USA. It shows how it is possible to make the hard choices and stand up for what you believe in.

Yes, it is two and half hours of singing. Yes, you have to sit through Russell Crowe trying to sing, but this film has everything you need in a political movie: personal and societal injustice, guns, revolution and moral lessons abound. Watch until you get to Can You Hear the People Sing? I defy you not to be moved.