‘I want City Hall to be a welcoming place for everyone’ 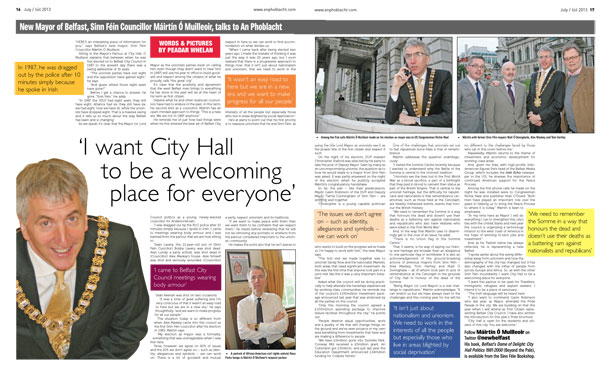 Sitting in the Mayor’s Parlour at City Hall, Ó Muilleoir explains that between when he was first elected on to Belfast City Council in 1987 to the present day there was a swing deferential of 16 seats.

“The unionist parties have lost eight and the ‘opposition’ have gained eight,” he says.

“And guess where those eight seats have gone?”

Before I get a chance to answer, he grins: “Sinn Féin.” He adds:

“In 1987, the SDLP had eight seats, they still have eight; Alliance had six, they still have six, we had eight, now we have 16, while the unionists have dropped eight. That is a massive swing and it tells us so much about the way Belfast has been and is changing.

As we speak, it’s clear that the Mayor (or Lord Mayor as the unionists parties insist on calling him even though they didn’t want to hear him in 1987) will use his year in office to build goodwill and respect among the citizens of what he proudly calls “this great city”.

It’s clear that the positivity and dynamism that the west Belfast man brings to everything he has done in the past will be at the heart of his term as first citizen.

Depsite what he and other reublican councillors have had to endure in the past, in this term, his second stint as a councillor, Máirtín has an open-minded approach to things. “This is a new era. We are not in 1987 anymore.”

He reminds me of just how bad things were when he first entered the bear pit of Belfast City Council politics as a young, newly-elected councillor for Andersonstown.

“I was dragged out by the RUC police after 10 minutes simply because I spoke in Irish. I came to meetings wearing body armour and I was banned from the parlour that we are now sitting in.

“It was a time of great suffering and I’m very conscious of that it wasn’t an easy road to here but we are in a new era,” he says thoughtfully, “and we want to make progress for all our people.” 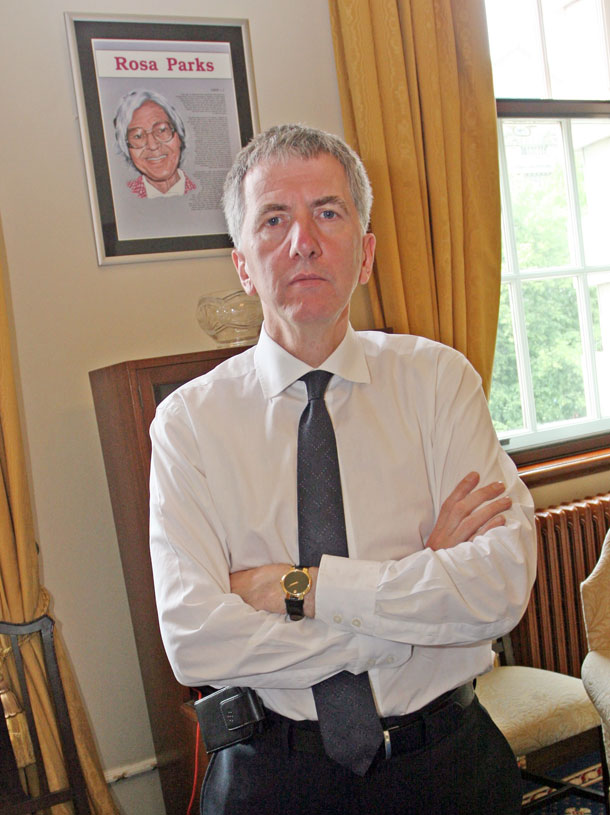 The situation today is so different from when Alex Maskey came into this council as the first Sinn Féin councillor after his election in 1983, Máirtín says.

“My election as mayor was a formality, something that was unimaginable when I was first here.

“Now, however, we agree on 90% of issues and the 10% we don’t agree on – such as identity, allegiances and symbols – we can work on. There is a lot of goodwill and mutual respect in here so we can work to find accommodation on what divides us.

“When I came back after being elected two years ago, I made the mistake of thinking it was just the way it was 20 years ago, but I soon realised that there is a progressive approach to things now: that it isn’t just about nationalism and unionism, that we need to work in the interests of all the people but especially those who live in areas blighted by social deprivation.”

He’s at pains to point out that his first priority is to reassure unionists that he and Sinn Féin, as a party, respect unionism and its traditions.

“If we want to make peace with them then we want them to be confident that we respect them,” he insists before reiterating that he will not be removing any portraits or artefacts from the parlour considered important to the unionist community.

He makes the point also that he isn’t averse to using the title Lord Mayor as unionists see it as the proper title of the first citizen and respect it such.

On the night of his election, DUP stalwart Christopher Stalford was selected by his party to take the post of Deputy Mayor. Seen by many as an uncompromising unionist, the question as to how he would relate to a mayor from Sinn Féin was asked. It was partly answered on the night of the election when he publicly accepted Máirtín’s congratulatory handshake.

So far, the pair – like their predecessors, Mayor Gavin Robinson of the DUP and Deputy Mayor Tierna Cunningham of Sinn Féin – are working well together. 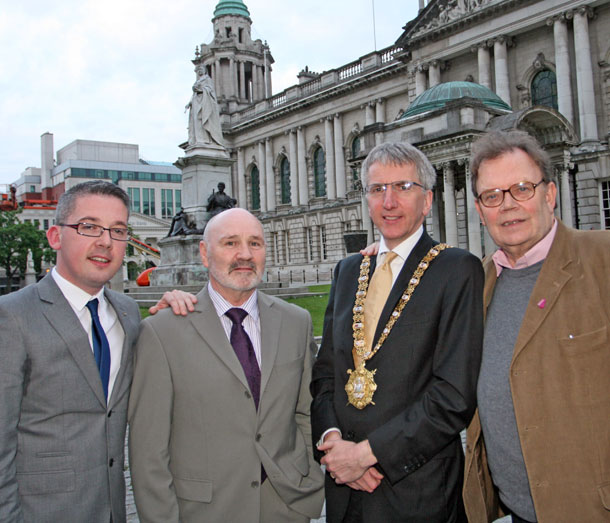 “Christopher is a young capable politician who wants to build on the progress we’ve made so I’m happy to work with him,” the new Mayor says.

“The first visit we made together was to unionist Sandy Row and the nationalist Markets, both areas that need significant investment. As this was the first time that anyone took part in a joint visit like this it was a very important initiative”.

Asked what the council will be doing practically to help alleviate the hardships experienced by working-class communities, he reminds me of the council’s £150million investment package announced last year that was endorsed by all the parties on the council.

“Only this morning the council agreed a £100million spending package to improve leisure facilities throughout the city,” he points out.

“People deserve equal opportunities, work and a quality of life that will change things on the ground and we’ve seen projects in my own area benefiting from investments that have and are making a difference to people.

“We have £2million gone into Dunville Park; Conway Mill received a £5million grant; An Cultúrlann got £3million; and just last year the Education Department announced £14million funding for Coláiste Feirste.”

One of the challenges that unionists set out to test republican bona fides is that of remembrance.

“I visited the Somme Centre recently because I wanted to understand why the Battle of the Somme is central to the Unionist tradition.

“Unionists see the lives lost in the First World War as a blood sacrifice, a part of a birthright that they paid in blood to cement their status as part of the British Empire. That is central to the unionist heritage, but the difficulty for republicans and nationalists is that remembrance ceremonies, such as those held at the Cenotaph, are heavily militarised events, events that honour the British military.

“We need to remember the Somme in a way that honours the dead and doesn’t use their deaths as a battering ram against nationalists and republicans who also have relatives who were killed in the First World War.”

And, in the way that Mairtín uses to disarmingly get to the crux of an issue, he adds:

“There is no Union flag in the Somme Centre.”

That, it seems, is his way of saying our history and heritage are broader than an allegiance to one particular flag or worldview. It is also an acknowledgement of the ground-breaking actions of previous mayors from Sinn Féin – Alex Maskey, Tom Hartley and Niall Ó Donnghaile – all of whom took part in acts of remembrance at the Cenotaph in the grounds of City Hall in honour of the dead of the Somme.

“Being Mayor (or Lord Mayor) is a real challenge to republicans,” Máirtín acknowledges. “It can stretch us but we have always risen to the challenges and this coming year for me will be no different to the challenges faced by those who sat in this room before me.”

Repeatedly, Máirtín returns to the theme of investment and economic development for working-class areas.

And, given his links with high-profile Irish-American figures (he’s head of the Belfast Media Group, which includes the Irish Echo newspaper in the US), he stresses the importance of continued American support for the Peace Process.

Among the first phone calls he made on the night he was installed were to Congressman Richie Neal and publisher Niall O’Dowd. “Both men have played an important role over the years in helping us to bring the Peace Process to where it is today,” Máirtín is keen to emphasise.

“In my time here as Mayor I will do everything I can to strengthen this city’s ties with the United States and next year the council is organising a technology mission to the west coast of America in the hope of winning hi-tech jobs and investment.”

And, as his Twitter name has always reflected, he is representing a new Belfast.

“I spoke earlier about the swing differential away from unionism and how the demography of the city has changed, but it has also changed with the influx of people from across Europe and Africa. So, as with the other Sinn Féin incumbents, I want City Hall to be a welcoming place for everyone.

“I want this parlour to be open for Travellers, immigrants, refugees and asylum seekers. I intend it to be a place of sanctuary.

“The Irish language will be heard here.

“I also want to commend Gavin Robinson who last year, as Mayor, attended the Pride Parade in the city. We are building on that this year when I will attend as First Citizen representing Belfast City Council. I have also written the introduction for this year’s Pride brochure.

“City Hall is open for the residents and citizens of this city. You are welcome.”

His book, Belfast’s Dome of Delight: City Hall Politics 1981-2000 (Beyond the Pale), is available from the Sinn Féin Bookshop.