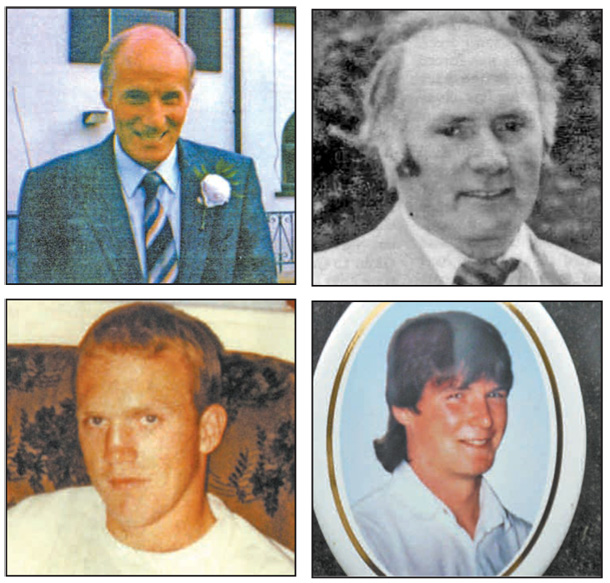 THERE WAS standing room only in Gulladuff Community Centre in County Derry on Saturday night, 23 March, when 200 people gathered to remember the victims of an indiscriminate murder attack by unionist gunmen — working in direct collusion with British state forces — in Castlerock on the morning of Thursday 25 March 1993. The attack left four workmen dead and one man fighting for his life.

Proceedings began with one minute of silence being observed in remembrance of the deceased: James McKenna (age 52), Maghera; Gerry Dalrymple (58), Rasharkin; Noel O’Kane (20), Swatragh; and IRA Volunteer Jimmy Kelly (25), Maghera. Slaughtneil man Gerry McEldowney, the only survivor among the workers who travelled together from south Derry to Castlerock that morning, joined those gathered in the respectful act of remembrance.

The commemorative event recalled how, on a bright sunny morning in 1993, the idyllic setting of Castlerock was shattered as an armed gang of pro-British forces opened up on a van with five construction workers on board.

A commemorative booklet recalls the attack:

“As their work van pulled into Gortree Park, Castlerock, around 9am, the engine was still running when a blue Ford Transit pulled up at full speed.  At least two gunmen opened fire with five automatic revolvers from point-blank range. Given no chance to escape at such close range, all five workers were cut down inside the van. The nature of the shooting suggested that one or more of the assassins had received military training in the use of weapons.”

“The contrast between the beautiful sunny day in Castlerock and the horror of the men lying dead could not be more dreadful. Many of the residents of Castlerock have moved here to retire, for peace and quiet.  Their tranquility was shattered in the most brutal way this morning.”

In the commemorative booklet, the issue of collusion is illustrated in the killings at Castlerock when Gerry McEldowney recalls “being stopped as a work squad by the RUC on the way to Castlerock became a frequent event leading up to the killings”.  He said: “We were stopped in the mornings and evenings, however mostly in the evenings.”

Relatives for Justice Director Mark Thompson, a guest speaker at the event, during his address heavily examined “the British state-sponsored policy of collusion”.

“From Thursday 25 March 1993 onwards, the place name of Castlerock will forever be embedded in the memories of many people in rural County Antrim and Derry as the location where James McKenna, Jimmy Kelly, Noel O’Kane and Gerry Dalrymple lost their lives during a week of genocidal attacks that left six dead, two seriously wounded and many others only narrowly escaping death or serious injury within a four-day period.

“It was a week of sorrow and pain that also saw the loyalist murder of Toome man Peter Gallagher (age 45), a father of seven young children gunned downed when working at Housing Executive properties at Distillery Street in west Belfast; a week that saw the slaying of young Damien Walsh (age 17) at the Dairy Farm Shopping Centre in Poleglass.

“Peter Gallagher, Damien Walsh and all the Castlerock victims were killed with South African weapons. All six were killed with Browning 9mm pistols. The importation of these weapons was a result of collusion within the highest levels of the British Intelligence services.

“This will be a very hard week for all the families of the bereaved given the 20th anniversary. As always, we remember all these good men who are forever loved by their families, neighbours and communities.”