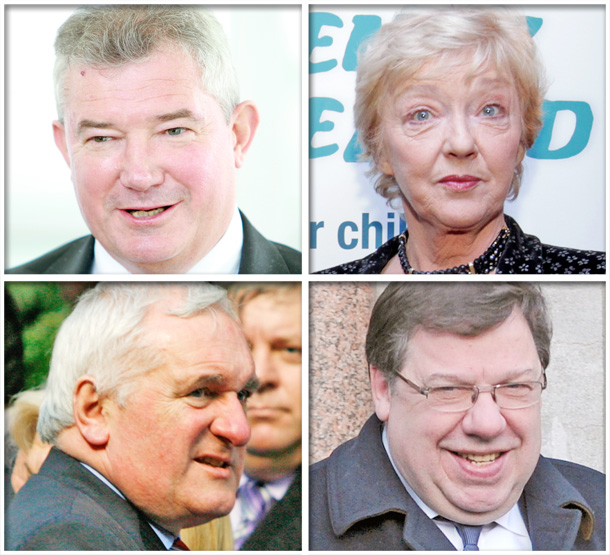 • High earners: Bank of Ireland CEO Richie Boucher, RTÉ’s Marian Finucane, and former Taoisígh Bertie Ahern and Brian Cowen are all on huge salaries or pensions, courtesy of the taxpayer

SO HOW has your wage packet performed in the first three months of 2013? A bit lighter again? Maybe not if you are a Bank of Ireland CEO or one of his chums, a hospital consultant, or an RTÉ broadcaster lecturing us not to be greedy in these times of austerity.

The vast majority of households are worse off in 2013 than they were five years ago when an economic tsunami surged through the international and Irish economies. Average disposable income has fallen from €24,380 in 2008 to €21,440 in 2011. Central Statistics Office deprivation and poverty figures published in February showed a deprivation rate of 24.5% in 2011 compared to 11.8% in 2007.

The Public Policy report includes figures on high-earners and low-earners in Irish society with the lowest 20% of workers taking home a median annual pay of €7,227 compared to €60,698 for the top 20% in 2010. That translates to the top 20% of wage earners earning over eight times the lowest 20%.

The Public Policy figures also show that although 53% of workers are in the same earning range they were in 2006, 23% were worse off while 24% were doing better. Yes, nearly 1 in 4 workers have emerged with higher wages through the recession.

Compare this with CSO figure for the last quarter of 2012 that measured an average hourly wage of €21.96. The highest hourly wage sector is education at €36, and amazingly still coming in at second is the financial, insurance and real estate sector at €28 an hour. The lowest average hourly wage rate was accommodation and food at under €13 an hour.

These statistics highlight inequalities in Irish wages but only give a partial picture. A report in mid-March by Mercer consultants showed that average bank salaries for employees who had been hired before the economic collapse had risen by between 4% and 16% since 2008.

There are 167 former senior bank officials on pensions of over €100,000. Irish hospital consultants have average earnings of €181,000 annually, compared to €91,000 in Britain and €100,000 in Germany according to EU Commission figures released in January.

The most bizarre case of wage negotiation must go to the Irish Medical Organisation, the former chief executive of which saw his salary rise form €250,000 in 2003 to around €500,000 in 2008, culminating in a settlement package of €9.7million when he left the organisation in late 2012.

So the message is clear: go into banking or hospital consulting or maybe consider a career as a failed politician. Fianna Fáil ex-leaders and former Taoisígh Bertie Ahern and Brian Cowen both have annual pensions respectively of €83,341 and €79,738.