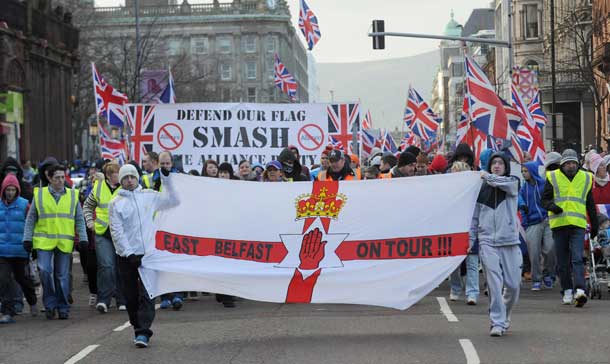 An Phoblacht’s PEADAR WHELAN chronicles here some of the numerous attacks that have taken place, exposing the nonsense that that flags protesters have somehow been discriminated against.

WHILE MAINSTREAM MEDIA reports of unionist protests about new arrangements for the flying of the Union flag at Belfast City Hall have focused largely on high-profile events, people across all communities – nationalist and unionist – have had to endure an almost constant undercurrent of intimidation, threats and physical violence as they try to go about their day-to-day lives.

The abdication of responsibility by unionist political leaders who had fuelled the flames of the flags violence came to a head on Monday 5 March when DUP leader and First Minister Peter Robinson claimed that the PSNI had lost the confidence of large sections of the unionist community. He went to accuse the PSNI of showing favouritism towards nationalists.

“There is a perception that the PSNI have not been impartial in dealing with the flag protests.”

Sinn Féin’s Gerry Kelly challenged the DUP leader and the media to go beyond this alleged perception. Weekly unionist marches from east Belfast to City Hall and back past the Short Strand (often heralding violence and always menacing) were unhindered and even escorted by the PSNI. The blocking of streets by flags protesters and veiled if not open threats to commuters and locals was allowed to go largely unchallenged by the authorities.

An Phoblacht’s PEADAR WHELAN chronicles here some of the numerous attacks that have taken place, exposing the nonsense that that flags protesters have somehow been discriminated against.

November – Unionists crank up tension, summoning crowds to protest at City Hall as the ‘flag vote’ is taking place.

As the mobs make their return journey to east Belfast, St Matthew’s Catholic Church and homes in the Short Strand are targeted. 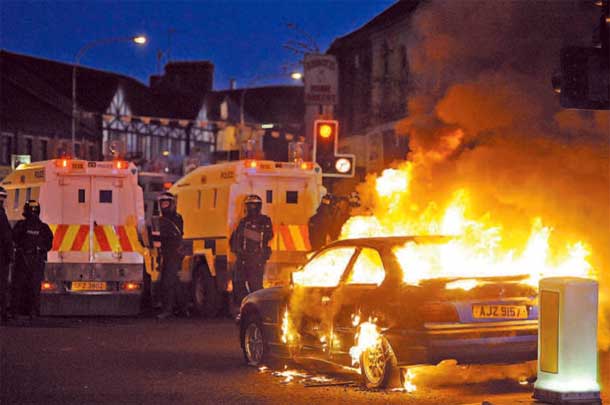 • Cars are damaged and petrol-bombed by flag protesters

7 December – Belfast: Van driver attacked as he tries to get through a road block on Shaftesbury Square, south Belfast. Two PSNI members injured in subsequent trouble.

Reports of a further six motorists being threatened.

UDA leader Jackie McDonald says that loyalists are pulling out of a flags protocol that had removed flags from flashpoint areas. 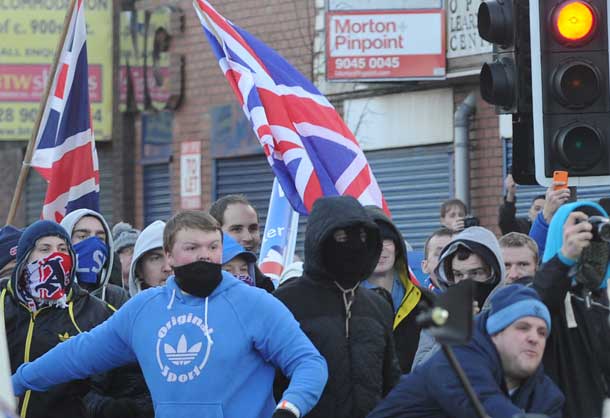 Larne, Antrim: Alliance Mayor of Larne forced from her home after warnings about her personal safety. Flags erected outside her house.

17 December – Carrickfergus: Unionist mob disrupts council meeting, throwing chairs and threatening both DUP and Alliance councillors. Catholic Alliance member Seán Neeson requires a PSNI escort to safety after he is singled out for threats and called a “Fenian c***”. Shoppers in a nearby supermarket have to be rescued when trouble flares.

Belfast: Rioting in Sandy Row, Newtownards Road and Shaw’s Bridge. A taxi is surrounded, kicked and pummelled by youths blocking Crumlin Road. Separately, a taxi driver from a taxi firm based in nationalist west Belfast is pelted with bricks and bottles by a gang at Glengall Street, forcing the driver to mount a pavement to escape.

A journalist reporting on a riot in east Belfast is punched to the ground by a masked man.

Flags erected outside Holy Cross, Our Lady of Mercy and Mercy Primary schools near Ardoyne.

Whitehead, Antrim: Our Lady of Lourdes Catholic Church damaged in an arson attack. 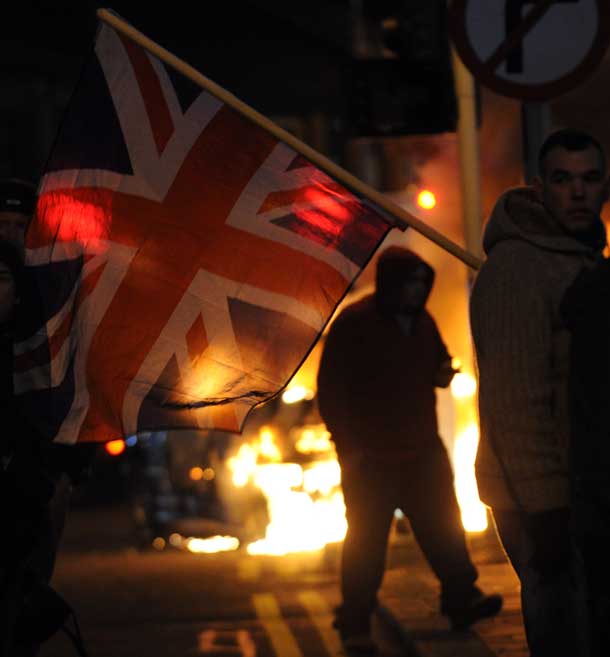 2 January – Glenarm, Antrim: Van driver beaten by two men who try to set fire to his vehicle. Sinn Féin’s Oliver McMullan says a UVF gang is operating in the area.

On Facebook, protest leader Jamie Bryson accuses PSNI of heavy handedness, saying: “The fact that a large number of these officers are Roman Catholic provides some explanation for their bloodlust.”

11 January – Newtownabbey: 33 petrol bombs thrown at PSNI. Bus hijacked and burned. In nearby Rathcoole, youths jeer and mock an elderly man as he pleads to be allowed through a roadblock to visit his elderly wife in hospital. The man is forced to turn back.

12 January – Belfast: Homes along the Albertbridge Road in the Short Strand damaged when unionist gangs returning from City Hall flag protest run amok. Nationalist residents defending their homes are attacked. One is identified and threatened via Facebook.

Loyalists twice prevent a GP attending to a terminally-ill patient. PSNI criticised for not doing enough to ensure doctor’s safe passage. The man has since died of his illness.

Two buses hijacked and the driver of one beaten, requiring hospital treatment.

15 January – Belfast: Unionists at a roadblock on the Springfield Road strike a car with a flagpole, damaging the vehicle. Driver criticises the PSNI who witness incident but fail to intervene. 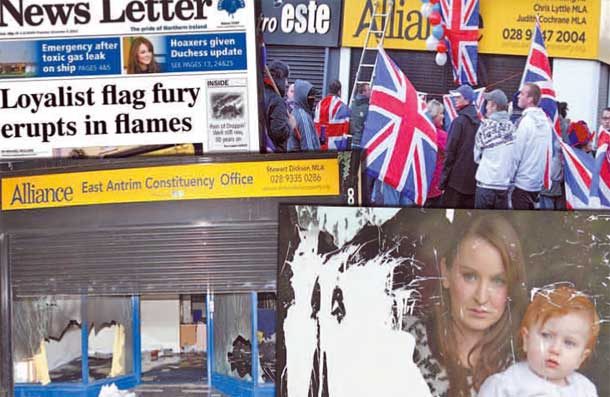 Derry: In the run-up to 30 January and the 41st anniversary of the Bloody Sunday killings in Derry, unionists erect Parachute Regiment flags at the Fountain Street interface overlooking the Bogside.

18 January – Dungannon: Sinn Féin says protesters using the grounds of the South Tyrone Hospital as a rallying point are intimidating staff and visitors.

21 January – Belfast: Judge orders Facebook to close pages of ‘Loyalists Peaceful Protests Updater’ and ‘Loyalists Against Short Strand’ after photos and the details of a Short Strand resident were posted online.

26 January –  Belfast: Protesters attack First Minister Peter Robinson’s car as he is driven away from meeting with church leaders and community representatives in east Belfast.

27 January – Newtownabbey: Fireworks and other missiles thrown at PSNI during several hours of rioting.

Dublin tourist posts on Trip Advisor website his car was attacked and paint-bombed by masked men before Christmas.

15 February – Garvagh, Derry: Nurse attacked as she travels to work. PSNI witness attacker throwing stone at vehicle but do nothing.

5 March – Dublin: Unionist supporters of Linfield soccer team chant sectarian songs and hoist Union flag on Shamrock Rovers stadium flagpole during Setanta Cup match in Tallaght. Garda injured when thrown from his horse after a flare is thrown at him. Second officer thrown to the ground by Linfield supporters.

6 March – Belfast: SDLP MLA Conal McDevitt third threat arrives with a bullet and a sympathy card sent through the post.