Unionism: 15 years after the signing of the Good Friday Agreement 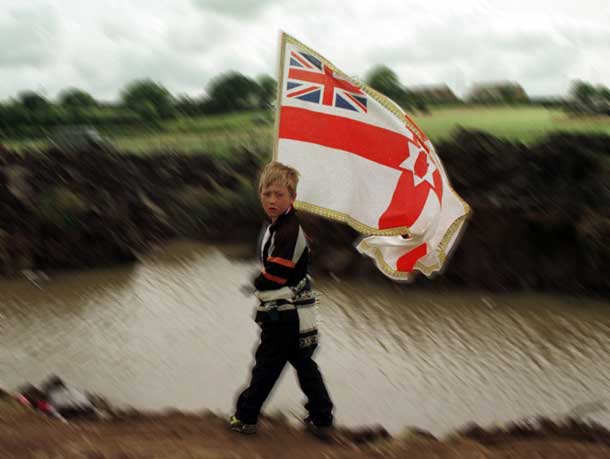 It is no accident that the Ulster Unionist Party, which was the architect of partition and dominated Northern politics for the next 60 years, is in meltdown

On the eve of the signing of the agreement in March 1998, Ian Paisley was in classic mode. He was leading his party and a few hundred supporters up the hill at Stormont (much as unionists were doing for decades) in vocal opposition to the agreement and denouncing the then leader of the Ulster Unionist Party, David Trimble, as a modern-day Lundy for being involved in the pre-agreement negotiations.

Ian Paisley occupied the area the party leaders had been using to brief the large media presence on the progress of the talks. He used his not-inconsiderable powers of oratory to launch a tirade against those betraying the people of Ulster and these included all shades of unionist opinion, loyalists and the British Government.

Some of the supporters of the loyalist parties at the talks could be heard challenging Paisley for his betrayal of them and his selective version of history. 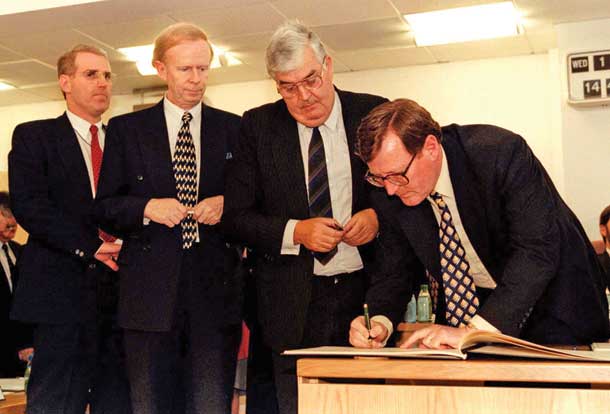 •  The UUP publicly tore itself apart over sharing government with Sinn Féin, looking over its shoulder at the DUP

The other press conference involving Ian Paisley Snr was the occasion he sat at the table with the leader of Sinn Féin (and now TD) Gerry Adams on 26 March 2007.

It was an incredibly spectacle to behold — one that I or indeed many others thought would never happen.

Seated around the press conference table, in what was once the citadel of the unionist state, Stormont, was Ian Paisley. Beside him was his deputy, Peter Robinson, and beside him was Nigel Dodds MP.

Paisley and Adams announced an agreement to restore the North’s political institutions on 8 May 2007, a few weeks later. Paisley said the leadership of the DUP had, a few days earlier, overwhelmingly endorsed the decision and it was a “binding resolution”.

Adams said the agreement between the DUP and Sinn Féin “marks the new beginning of a new era of politics on this island”.

Looking at the press conference photograph some six years on from that day, it is still hard to believe that it took place at all, yet it did and there have been many other images involving unionists and republicans which beggar as much belief as the 2007 press conference. 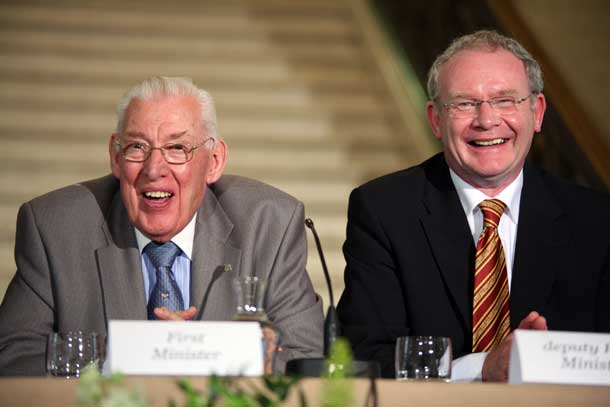 Ian Paisley Snr took to his role as joint First Minister with Martin McGuinness like the proverbial duck to water and although they were dubbed by the media as ‘The Chuckle Brothers’ in a disparaging way, their friendly demeanour helped solidify the fledgling political relationship between the DUP and Sinn Féin and injected an enthusiasm into Northern politics and the peace and political processes that was heretofore absent.

Ian Paisley’s open and cordial engagement with the Irish Government and his personal and political trips to the south of Ireland also helped defuse fear inside the unionist community about practical all-Ireland economic initiatives which are a very important part of bringing both parts of the island closer together politically.

Peter Robinson and indeed other unionist members of the North’s Executive have continued engaging with the Irish Government and other Southern-based parties.

And while the joint First Ministers Peter Robinson and Martin McGuinness have a substantial working relationship it lacks the bonhomie style of the Paisley/McGuinness era. 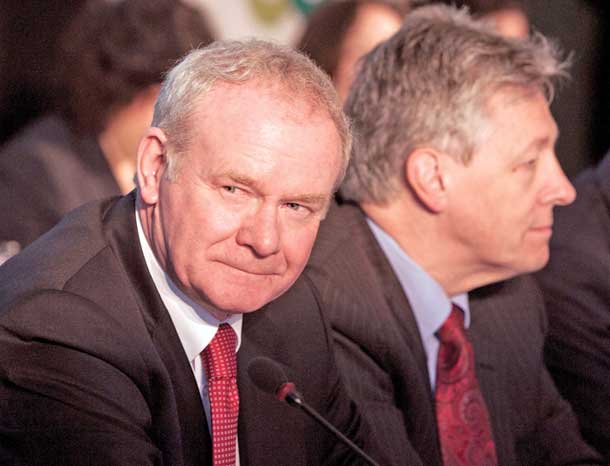 But for all of that, the power-sharing government in the North is as stable under Peter Robinson and Martin McGuinness as it was under Paisley Snr.

And while there have been periodic rushes of blood to the head by Peter Robinson, these have been short-lived and none of them fundamentally threatened the stability of the working relationship between the DUP and Sinn Féin.

The most recent controversy was about the Union flag flying over Belfast City Council unsettled the unionist community at many levels and this was reflected in the response to it by all shades of unionist opinion.

But the street protests were essentially about loyalists trying to define themselves as being more patriotic than the rest of the unionist parties in the hope rather than expectation that they could accrue support for the building of a loyalist political party.

The DUP have benefited considerable from their rapprochement with Sinn Féin. The unionist electorate flocked to them and endorsed their decision to engage with republicans by giving them an unassailable lead over their rivals in the Ulster Unionist Party.

And it is no accident that the Ulster Unionist Party, which was the architect of partition and dominated Northern politics for the next 60 years, is in meltdown and has effectively been sidelined since the DUP decided to go into government with Sinn Féin.

Once the Ulster Unionist Party took the decision to form a government with Sinn Féin it failed to robustly defend its decision. It kept looking over its shoulder at the DUP and constantly dithered, which encouraged one leadership challenge after another.

The DUP sat in the wings and swooped when the time was right and almost wiped the Ulster Unionist Party off the political map. 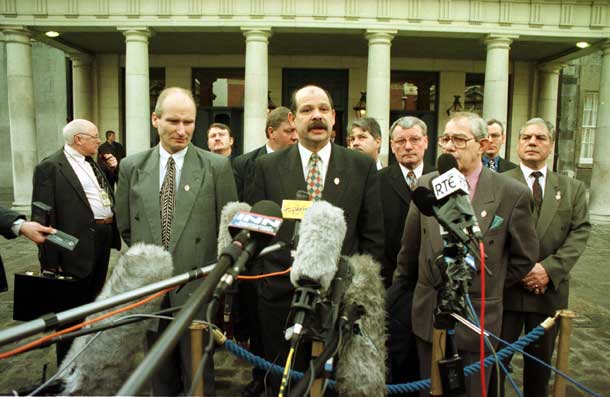 • The UVF-linked Progressive Unionist Party and the UDA-linked Ulster Democratic Party have failed to develop a coherent voice for working-class unionists despite the promise shown by the late PUP leader David Ervine (centre) and his deputy, Billy Hutchinson (left)

Despite an impressive beginning with articulate leaders like David Ervine and Billy Hutchinson (of the UVF-linked Progressive Unionist Party), and Davy Adams and Gary McMichael (UDA-linked Ulster Democratic Party), their parties, the PUP and the UDP, failed in their political project — the building of a party to represent working-class unionists.

For the loyalist parties the reason for their decline is different than that of the Ulster Unionist Party.

The loyalist parties were up front and honest in their support for the peace and political processes.

Their message was refreshing and bold. It was a positive message of engaging with nationalists and republicans and putting armed conflict behind them.

The loyalist parties had a very high profile and in the first few years after their ceasefires the prospects were good for their project.

But the dark forces of British Intelligence and the RUC Special Branch had an agenda that effectively destroyed the good chance of building such a loyalist political party. These forces were determined to retain as much control over loyalists as possible.

They did this through highly-placed informers and agents who did their bidding. This was to be seen in the murderous feuds that broke out between the UVF and the UDA. It was also obvious in the presence of known drug dealers in both organisations having a public profile which was extremely damaging to the attempts by the leaders of the PUP and UDP to build a party people would vote for.

The sudden death of David Ervine and the undermining of Dawn Purvis (his replacement) were huge factors in the demise of a once-promising project.

Today, loyalist representatives have a minuscule electoral base. They have nothing to say about the British Government’s plans to gut the welfare state through cuts but plenty to say about Union Jacks and Orange marches. Their project still has a chance to be revived — but not on the basis of flags, marches and drums.

However, taken as a whole, I think Gerry Adams was right when he said at the press conference with Ian Paisley Snr in 2007 that we were entering “a new era” and “a new beginning” in Irish politics and at the centre of that are the unionist parties in all their shades.