The challenge of uniting Catholic, Protestant and Dissenter 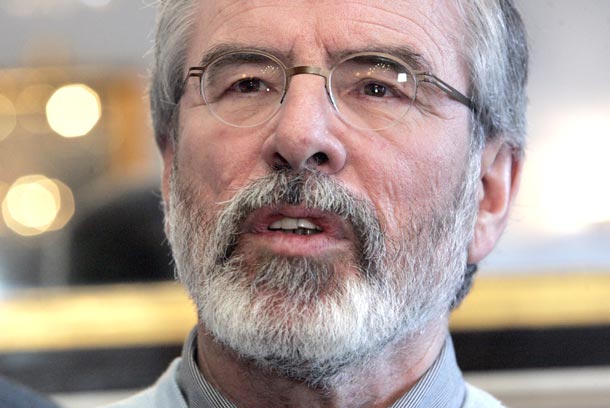 ‘There’s nothing more important than the future. The past has its place, of course, but the reason we argue so much about the past is that we have not agreed the future’

NATIONAL LIBRARY, Dublin. 10:15am. It’s five days since Gerry Adams launched the campaign with 450 people in Dublin for a Border poll as provided for under the Good Friday Agreement. It’s the day after the Sinn Féin leader attended the funeral in Belfast of trade union and social activist Inez McCormack.

Gerry talks about Inez and contemplates his coffee. He wonders aloud about the people who picked and transported the coffee from wherever in the world it came from. Then there’s the people who crafted the cup and saucer. He has a busy schedule but today he’s in no mood to rush.

He’s quietly enjoying having the time to ruminate about what makes the world go round before he goes next-door to the political hustle and bustle of the Dáil.

Sinn Féin wants a Border poll in the course of the next Oireachtas and Assembly terms.

Democratic Unionist Party Minister Arlene Foster had told Sinn Féin’s Mitchel McLaughlin in a Stephen Nolan Radio Ulster interview a couple of days earlier that republicans should “be careful what you wish for” in pushing for a Border poll. Unionists might “call Sinn Féin’s bluff”, she says as a warning.

“This is not a Sinn Féin bluff,” Gerry Adams says firmly. “This is not a game of poker. We believe that people in Ireland — and I include Arlene Foster in that — are not well served by partition: two systems for nearly everything and two economies on this small island.”

Taoiseach Enda Kenny, Tánaiste Eamon Gilmore and others have tried to shelve the idea of a Border poll by saying the time isn’t right.

“Is it ever right?” asks Gerry Adams with a wry smile.

“When will it ever be right for those who want to resist or minimise change?

“Some people – especially those at the top – are always comfortable with the status quo.”

Given the disarray over the Union flag controversy, is the unionist mindset open for a debate on a united Ireland?

“Unionism isn’t a monolith. We saw that at the Uniting Ireland conferences in Newry and Derry, particularly at the Derry conference, where there was a very sizeable unionist attendance and openness to discuss the future.” 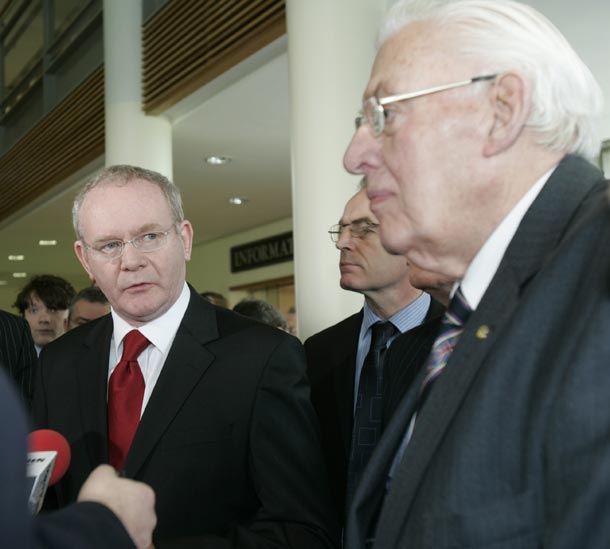 • We must find a way of making a reality of the famous Wolfe Tone quote of ‘uniting Catholic, Protestant and Dissenter’

We touch on Peter Robinson’s speech in Belfast City Hall in November at an event to celebrate the centenary of the Ulster Covenant when the DUP leader said that “today, the Union is more secure than before”.

If that is the case, then why reject a debate?

“There is nothing for unionists to fear,” Gerry Adams says, “because, when all is said and done, it will be the citizens walking into the polling stations and voting on this who decide. It’s not going to be sneaked up on people, decided by politicians or the elites — it’s going to be every single person who has a vote who will have a say.”

Peter Robinson leads the Democratic Unionist Party, Gerry Adams points out, emphasising the ‘democratic’ part of its title. “If the word ‘Democratic’ means anything, what have unionists possibly to fear around discussing these issues?”

Gerry Adams observes that many genuine people as well as seasoned commentators have often said that things were impossible that have come to pass.

“An Phoblacht was probably the only newspaper that regularly pushed the Sinn Féin strategy document, A Scenario for Peace, that eventually grew into the Peace Process and the Good Friday Agreement long before it was common parlance and when others would have settled for much less.”

Other thorny issues that have been and are being addressed include armed groups, justice and policing as well as power-sharing between republicans and unionists, including the DUP.

The issue of reunification is not a matter of the 26 Counties taking over the Six Counties, Gerry Adams argues. 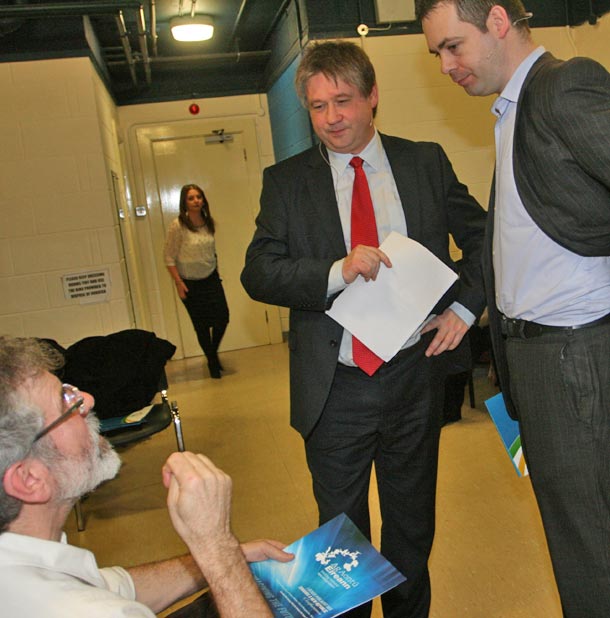 The Southern state is “a dictionary republic” and while there are many good things about it there are also many things that could be better or be put in place to fulfill the ideals of a true republic, the Sinn Féin leader says.

“We don’t want to nationalise poverty, unemployment or austerity, or make emigration the norm for everyone. We want an entirely new settlement and a genuine republic operating on core principles of equality, justice, democracy and decency. All of that needs to be debated and thrashed out and more and more people need to be empowered to have a place and a role in that debate and society.”

I raise with him a post on the Slugger O’Toole website by ‘Kilsally’ asking about some of the ‘nuts and bolts’ issues that unionists have concerns about.

“There should be nothing that isn’t up for discussion,” says Gerry Adams. “Now on some of these matters people may take a very firm view that this or that is an issue of principle and that’s fair enough but I don’t like clárs or agendas which say we cannot discuss this issue.

“On flags and emblems, there clearly needs to be a joined-up discussion on how we deal with that issue. When I first went to post-apartheid South Africa to meet Nelson Mandela, I was surprised that the Parliament Buildings still had a lot of the old Afrikaaner symbols. The ANC said this was a very conscious decision, that they wanted a new South Africa and that, although things may change over time, they wanted to reassure the Afrikaaner community that the new South Africa is their South Africa as well. I learned a lesson from that.

“I don’t want to see the Union flag flying anywhere in Ireland but there are those who do, so let’s see if we can find an accommodation with them.”

Sectarianism is a big issue that has to be addressed by all sides, Gerry Adams says. “Partition was based on a sectarian headcount so it institutionalised sectarianism.”

He takes issue with Taoiseach Enda Kenny’s observation that a united Ireland is inevitable.

“It isn’t inevitable. If it was, then we wouldn’t have to work for it. It’s achievable but it’s not inevitable. Certainly the type of united Ireland republicans want to see won’t happen unless we work for it.”

All of the Leinster House parties have the reunification of Ireland as part of their primary objectives, they are obliged to pursue the implementation of the Good Friday Agreement and the Irish Government has a Constitutional imperative to pursue Irish unity.

“So what are their strategies? They can’t just say off-hand the time isn’t right. They need to show an alternative way of moving forward and in these new terms in the Dáil and the Seanad we’ll be seeking answers from the Taoiseach in particicular but also Fine Gael, Labour and Fianna Fáil as well as the Independents.”

In the Assembly, Sinn Féin MLAs will similarly be active on extending the debate and dialogue about what difference Irish unity would make to society, to women, to young people, to rural as well as urban communities, to public services and the economy and jobs. 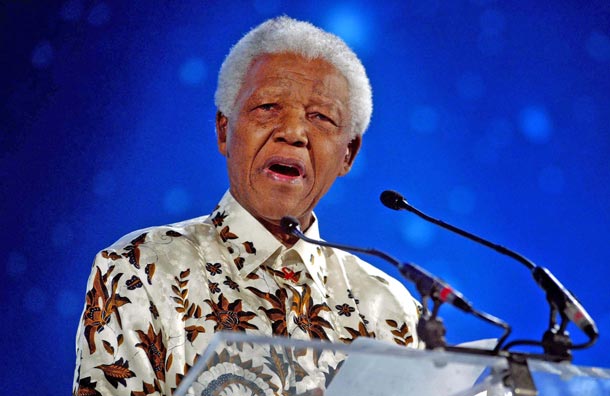 • The ANC were conscious of Afrikaaner symbols

Sinn Féin may have tried to instill some impetus by launching the campaign but it’s not the sole preserve of Sinn Féin, “And nor should it be,” Gerry Adams stresses. “There are many good republicans and good people out there with good ideas who are not members of Sinn Féin and we need to hear them. Sinn Féin doesn’t have all the answers.

“I think there is a huge number of people throughout Ireland who are incredibly angry at the elites – in the North and the South, and at Westminster and the EU – who have run things for themselves and that people cannot change the way things are still being run. What we have to do is create ways and means for them to take ownership of this process. James Connolly said it best when he called it ‘The Reconquest of Ireland’.

“There’s nothing more important than the future. The past has its place, of course, but the reason we argue so much about the past is that we have not agreed the future.

“Whatever your position on what the future should be, you should be part of trying to shape it. You should not be put off and if you want to come forward and argue for the Union, then argue for the Union, or if you’re from a unionist background or you’re what one unionist woman told me was her ‘voyage of discovery’, then let’s hear that too.

“We have had this historical cleavage between the Orange and the Green and I just don’t accept that we don’t have the wit to heal that, to bridge that gap, to find a way of making a reality out the famous Wolfe Tone quote of ‘uniting Catholic, Protestant and Dissenter’.”

“That’s very challenging but it’s doable if we proactively listen and empower people.”

A small group of people can lead the drive for change in any society, Gerry Adams says, but genuine change that is “citizen-based and rights-based” needs the maximum possible involvement of citizens. “And not least those who are currently unionists.”