In the eye of the flags storm

Short Strand resident under siege speaks to An Phoblacht 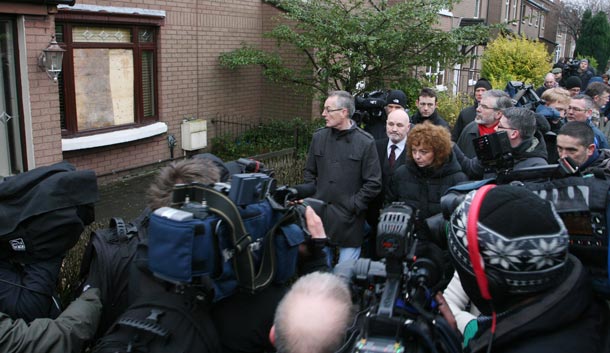 ON THE NIGHT of 3 December 2012, when Belfast City councillors voted to restrict the flying of the Union flag at City Hall on designated days (the same as the Assembly at Stormont), the small nationalist neighbourhood of Short Strand was attacked by unionist gangs returning from their violent spree at City Hall.

Since then, residents have had to endure an almost constant torrent of abuse and violence as gangs blocked roads on the periphery of the district and attacked their homes.

Weekly demonstrations at the City Hall every Saturday have seen hundreds of masked, flag-waving loyalists marching to and from east Belfast to the city centre in illegal parades.

These parades, facilitated by the PSNI, have degenerated into loyalist ‘hate-fests’ as the marchers shout abuse and launch stones, bricks, bolts and golf balls at the homes of residents along the interface at Strand Walk.

An Phoblacht spoke to Geraldine (not her real name) about the attitude of residents to the latest onslaught on them in the long history of sectarian assaults since the 1920s.

Geraldine is convinced the bogus Alliance-style leaflet distributed in East Belfast by the DUP and UUP on the Union flag issue inflamed the situation and “has a lot to answer for”.

“Although the leaflet was aimed at the Alliance Party the reality is that loyalism is volatile at the best of times and the leaflet just incited them to violence.

“We experienced that in 2002 when the area was coming under constant attack from loyalists and the place was practically under siege.” 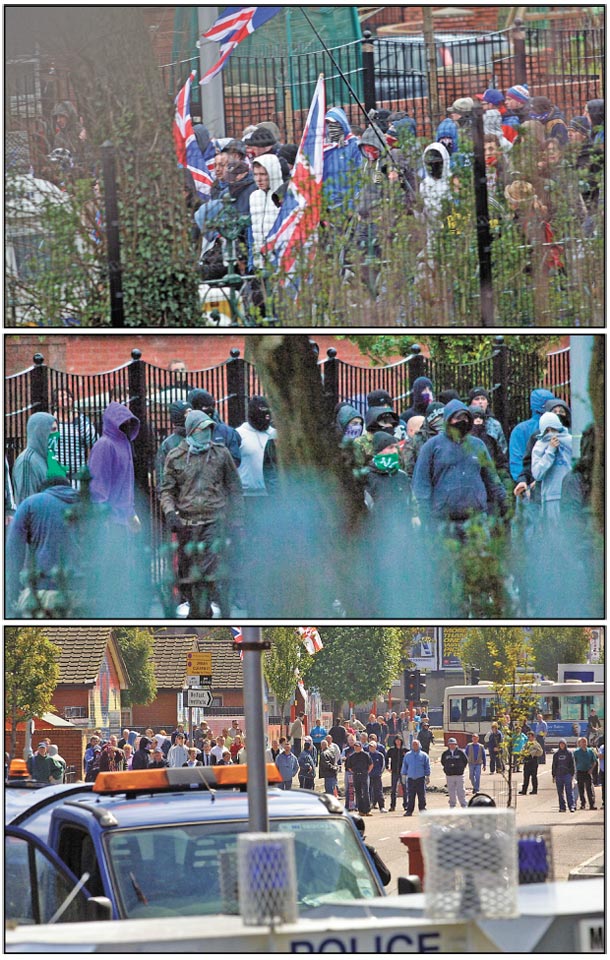 • 2013: Masked loyalists march past the PSNI outside St Matthew’s church in Short Strand; 2011: A 200-strong UVF-backed mob attacked houses in the Strand Walk area of Short Strand; 2002: Short Strand came under constant attack from loyalists and was practically under siege

In 2011, a 200-strong UVF mob invaded the area and smashed up houses along the Mountpottinger and Albertbridge roads.

“So it’s no real surprise that we would be targeted,” Geraldine  says.

Geraldine says that Short Strand residents live with a flags issue “day and daily”. The Union flag is hung from lamp-posts outside St Matthew’s Church all the time.

“This is a planned insult and an attempt to intimidate our community,” she says but adds: “In fairness to our people, they are sensible enough not to react to this. People here don’t need to fly a flag to know who they are.”

The attitude and behaviour of the PSNI has been a big issue for nationalists enduring the flag protests.

In particular, the people of the Short Strand have questioned the way the police have (or have not) dealt with aggressive protests close to the district and the illegal marches along the Newtownards Road.

“We see the ‘softly-softly’ approach to these gangs blocking roads and compare it with the aggressive policing of our people when they come out to defend themselves,” says Geraldine .

“On two particular occasions the PSNI seemed to show itself as being more eager to ‘get into’ our ones than deal with these unionist rioters.”

On Saturday 12 January, the protesters refused to follow the designated route back to east Belfast and charged along Oxford Street onto the Albertbridge Road, where they smashed up homes belonging to Catholic families.

“Residents, naturally enough,” says Geraldine , “came out to defend their homes. When the PSNI arrived and after the mob retreated, the PSNI deployed riot squads at Mountpottinger Road facing our ones and when Sinn Féin’s Niall Ó Donnghaile and Alex Maskey approached the police lines they were pushed and jostled.”

A similar situation developed in Bryson Street on Monday 7 January. When the mobs returned from a rally at City Hall, they attacked Stand Walk and the chapel. “When nationalist residents came out, the PSNI were aggressive.”

Geraldine points out that the rioting on Monday night was the fifth consecutive night of rioting in east Belfast.

“Our political representatives and community leaders are doing a great job in keeping our people focused.

“We need our community to be disciplined and not get drawn into this. It is clear the unionist politicians and the mobs want a reaction. It then becomes some kind of sectarian tit-for-tat squabble.

“It was noteworthy that when the houses on the Albertbridge were being attacked the media continued to refer to the unionist mobs as ‘protesters’,” complains Geraldine.

Geraldine sums up the attitude of her community:

“I want everybody to be treated the same so if unionists think they are getting treated unfairly in employment or in education then they should take their grievances to their politicians and representatives — don’t take it out on the people of the Short Strand.

“They need to realise that what affects them affects us and flying a flag above City Hall won’t change that.”