Remembering the Past: Sinn Féin shakes up local government in North 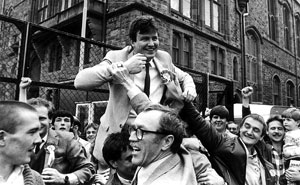 From the establishment of Six-County state local government in that area was a bastion of sectarian bigotry and the means by which Unionism exercised discrimination in housing and jobs and voting. Sinn Féin boycotted local elections up to the early 1980s but the party’s decision to contest for council seats across the North in 1985 saw sectarian local government facing the biggest challenge in its history.
The council elections of 1985 represented another significant stage in the development of Sinn Féin’s electoral strategy. In 1982 the party won five seats in elections to an ill-fated Assembly set up by British Secretary of State Jim Prior and boycotted by both Sinn Féin and the SDLP. In 1983 Gerry Adams became MP for West Belfast for the first time and Danny Morrison missed out on a seat in Mid-Ulster by only a handful of votes. He was also the candidate in the European elections in 1984 when Sinn Féin took 12% of the vote.
There were 26 district councils and Sinn Féin decided to contest 17 of them with a view to targeting winnable seats rather than maximising the vote across the Six Counties. At the start of the campaign the party publicly set the modest target of 30 to 35 seats.
From the beginning of the campaign Sinn Féin candidates, directors of elections and election workers were subject to extensive harassment by the RUC and British Army and to threats from unionist paramilitaries. Ian Paisley’s DUP fought the campaign on the slogan ‘Smash Sinn Féin’ and he was photographed with this slogan written across a sledge hammer – a chilling image for nationalists who knew the reality of doors being smashed in by British raiding parties or loyalist death squads.
Sinn Féin fought the campaign by urging people to ‘vote republican’ and pledging ‘effective local leadership’. Gerry Adams stated that the aim was to build a ‘middle leadership’ of Sinn Féin elected representatives across the Six Counties. Nationalist representation on councils in the North had been almost the sole preserve of the SDLP. Its allies in Fine Gael, Fianna Fáil and the Irish Labour Party attempted to defend it from the republican challenge, with the ever faithful Irish News acting as the SDLP’s cheer-leader. In a further effort to thwart Sinn Féin the British government introduced new voting regulations requiring various forms of ID (including non-photo ID) to be produced at polling stations but not accepting unemployment benefit cards.
In spite of these obstacles the political establishment received another jolt when Sinn Féin won 59 seats, securing representation on all 17 councils contested (12% of overall vote). Sinn Féin won more seats than the SDLP on Belfast, Fermanagh and Omagh councils, taking the chairs of the latter two. Unionists reacted with fury and began attempting to exclude Sinn Féin from councils, sometimes physically. The DUP’s Sammy Wilson described them as “poison” and “evil gunmen who have crawled out of West Belfast”.
During the campaign undercover British soldiers had been discovered watching the home of John Davey, Sinn Féin candidate for Magherafelt District Council. At the first meeting of the Council, newly elected John Davey was assaulted and injured by unionist councillors. Four years later he was murdered at his home, having just returned from a Council meeting.
The campaign of harassment, which failed to prevent Sinn Féin’s local electoral success, began when the party Six-County’s Director of Elections Owen Carron was held up by the RUC on his way Dungannon on 16 April 1985, 25 years ago this week.
An Phoblacht
44 Parnell Sq.
Dublin 1
Ireland