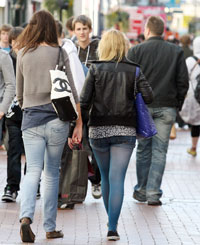 The ESRI produces research on economic and social change, research that is used to inform public policymaking in Ireland and throughout the European Union. The organisation publishes its findings quarterly in reports entitled Quarterly Economic Commentaries. The Spring report, published on Tuesday last, will bring cold comfort to the thousands of people lining the dole queues in Ireland. The ESRI are not predicting a growth in employment in the coming year and while the report predicts a 1% decrease in unemployment, that will be down to the forecasted emigration of 100,000 people by this time next year.
The Fianna Fáil/Green Government has no back-to-work strategy and is heavily dependent on emigration to whitewash the whole debacle. Commenting on the ESRI report’s findings Sinn Féin spokesperson on the Economy, Arthur Morgan criticised the Government’s abject failure to address the issues arising out of the economic mess they created in the first place.
“This report and the Central Bank Quarterly Bulletin”, Morgan said.  “lay bare for all to see the failures of the Government and how there are no prospects of employment in the current Government term. Never has it been more obvious that the Government need to step aside and make way for a party who has costed job creation proposals, proposals that do not rely on emigration.”
Pointing to the Sinn Féin’s job stimulus proposals Morgan said
“In the past year Sinn Féin has published two documents with plans to get Ireland back to work including proposals to tackle youth unemployment. None of these proposals hinged on exporting 100,000 people. When the ESRI said that annual growth will be led by exports, they did not mean our people.”

Protest – show the Government the boat

Dublin Sinn Féin will be holding a protest outside Leinster House on Monday next. 19 April, at 11.30am to highlight the rising rates of emigration arising out of unemployment in this country. Recent predictions forecast emigration figures for the coming year at 100,000.
Pajo Mac Aodha of Dublin Sinn Féin is calling for a big turn out:
“We are asking as many activists as possible to show up at the gates of Leinster House with one large empty suit case and their passport! Fear not, there will be deportations handed out.”
The protest is designed to highlight the rising rates of emigration as a result of unemployment. Protestors will be given a sticker naming their particular trade – for instance “CARPENTER – FAILED BY FIANNA FÁIL”.  So whatever your trade or profession or job come along on Monday and lay the baggage of the current economic crisis where it belongs – at the door of Leinster House. Don’t let this Government try to hide unemployment figures by showing our young people the boat when it’s the Government that should be shown the boat.