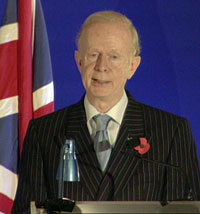 Political interference by the Loyal Orders has been slammed by Sinn Féin’s Alex Maskey as involvement in a blatantly sectarian “carve up”. The Belfast MLA was commenting after an open letter from the Orange Order and Royal Black Preceptory in Sandy Row appeared in the Newsletter.
“For some years the Orange Order has sought to claim that they are little more than a cultural organisation which offers no threat to anyone. Over the weekend in Sandy Row Orange Hall the cultural mask slipped again,” said Maskey.
In an open letter to UUP leader Reg Empey, the Loyal Orders called for unionists to unseat nationalist politicians by standing joint candidates and threatened to “direct our members and friends not to support any party that indicates they are not prepared to stand aside”.
The Order’s political intervention in the forthcoming Westminster election contrasts sharply with an earlier declaration that “as an institution we try not to interfere with the political views of any of our members”.
This earlier declaration accompanied news that a senior member of the Orange Order was standing as a candidate for the British National Party in England. Interference at one moment, non interference in another, it sounds like a contradiction but it’s not.
Despite its protestations otherwise, the Orange Order is a quasi political organisation with a history of both sectarianism and racism. Of course they find affinity with the likes of the BNP.
“Hot on the heels of their alliance with the British far right in protesting against the papal visit to Britain, the Orange Order in a very public fashion has sought to intervene in the Westminster election,” said Maskey.
Meanwhile the UUP, under the stewardship of Reg Empey, isn’t circling the wagons as much as running in circles, first one way, then another.
Empey began with a declared renewed alliance with the British Conservative Party. Such an alliance would place unionism at the heart of British political power, claimed Empey and end ‘tribal’ voting in the North.
Speaking earlier in the year British Tory Owen Paterson, the Conservative Party’s Shadow Secretary for the North, ruled out any electoral pacts between the Tory-aligned UUP and the DUP.
“There is no question of us being involved in any kind of electoral arrangement in Northern Ireland that involves other parties,” said Paterson.
“We are completely committed to standing together, as Conservatives and Unionists, to offer the people of Northern Ireland the opportunity to support national, mainstream and non-sectarian politics,” said Paterson.
But having no sooner declared his hand for St George, we find Empey back with King Billy and a pact with the DUP against the nationalist electorate in Fermanagh and South Tyrone.
By embracing David Cameron, Empey lost the support of his party’s only sitting Westminster MP, Silvia Hermon, who is now running as an independent.
On the other hand, his late conversion to co-operating with the DUP has cost Empey the support of those striving to redefine the UUP in terms of class affinity with British Tories.
And that’s not the only difficulties the UUP leader is hoping against all hope to navigate. Too afraid of defeat in East Belfast at the hands of his DUP rival Peter Robinson, Empey is standing in South Antrim.
To secure a Westminster seat in South Antrim, Empey must rely on the sitting DUP MP, Willie McCrea’s vote being split by Jim McAllister’s TUV party and tactical voting by nationalists prepared to do anything to keep McCrea out.
As Brian Feeney pointed out, this gives Empey the almost impossible task of courting the nationalist electorate in South Antrim while proclaiming an anti-nationalist pact in Fermanagh South Tyrone.
No wonder Empey finds himself all at sea, overwhelmed by the high tide of a changed political landscape and not waving but drowning. How else can we understand the fact that within hours of being publicly pilloried as a liar by Peter Robinson, Empey embraces a deal with the DUP?
An Phoblacht
44 Parnell Sq.
Dublin 1
Ireland