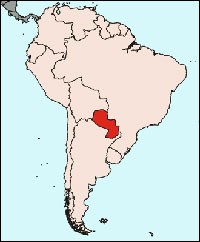 In April 2008, the people of Paraguay made a dramatic break with their past by electing to the highest office in the land a most unorthodox president, one Fernando Lugo.
The new president was unique in two key respects: he had been a Catholic bishop who resigned from the church in 2005, after it denied him permission to run for elected office. Whilst under the authority of Rome, Lugo had served in Paraguay’s most impoverished region where his work gained him the epithet ‘Bishop of the Poor’.
Lugo was a cleric who had been schooled in Liberation Theology in early 1980s Latin America.
In 1982 his activities brought him to the attention of the then Paraguayan regime, which requested that Rome remove the troublesome cleric from the country. Rome duly complied, displaying a speed and sensitivity that many Irish people might rightly find astonishing.
But there was another and perhaps even more remarkable element to Lugo’s 2008 poll victory: he was the first democratically elected leftist head of state in the history of Paraguay.
His triumph brought an end to 61 years of uninterrupted rule by the Colorado Party and with it an apparent repudiation of the darkest years in Paraguay’s history: the 35 year long regime of General Alfredo Stroessner. Even after Stroessner was ousted in a 1989 coup, the utterly corrupt Colorados retained total control. After all, the aging dictator was ejected from office by none other than his son-in-law, also an army general.
Stroessner’s regime made Paraguay infamous even when all of Latin America was under the control of the despotic (and usually deranged) right. Indeed, his was a regime in which Nazi war criminals lived openly during the 1950s and 1960s. The most infamous of all – Josef Mengele, the Angel of Death from Auschwitz – partook of Paraguayan hospitality for several years and felt so relaxed about his status that he carried a passport in the name of Jose Menegle.
The regime had a particularly sadistic bent, as evidenced by the almost routine presence of torture chambers throughout the capital city, Asuncion, and nationwide. It is estimated that some 10,000 people passed through one such ‘torture centre’ in the capital. Its practitioners received training from a US army colonel, Robert K Thierry. Their most notorious ‘technique’ was the pileta – a bath filled with excrement into which political opponents and dissidents would be submerged.
In some respects, repugnant as it sounds, that is a rather apt metaphor for the Paraguay that was inherited by Fernando Lugo in 2008, a nation that had been immersed for seven decades in the filth of corruption, repression and semi-feudal social relations.
President Lugo began well. Upon being sworn into office he refused to accept the presidential salary, because as he explained “it belongs to more humble people.” He also named Margarita Mbywangi – of the Ache people – as the Minister for Indigenous Affairs, the first indigenous to hold the post.
His government also directed authorities to arrest an aging former Interior Minister who held office during the years of dictatorship, a remarkable act in a country where impunity is deeply engrained.
But President Lugo is facing decades, if not centuries of entrenched privilege and power, one which comprises virtually the entire structure of the Paraguayan state.
A central plank of his electoral platform was land reform, urgently needed in a country where an elite of 1% percent own 77% of the land. And a good portion of that land was either stolen or fraudulently obtained during the years of dictatorship. But restoring ownership by legal means has proven virtually impossible, as the country’s judicial system is part of the old regime and feels more comfortable in the moral pileta that was old Paraguay.
And any attempt to resolve the matter by way of constitutional change would likely meet with a similar fate, as the old regime’s tentacles spread all the way to the nine judges who head the Supreme Court and who have made their opposition to Lugo known.
It is akin, as one diplomat observed recently, “to a permanent coup d’etat.”
In November, Lugo was forced to move against senior elements in the military, dismissing senior commanders that he accused of plotting an actual coup.
Everywhere the lesson of Honduras reverberates, where progressive President Manuel Zelaya was ousted following his tentative attempts at land reform and a decision to raise the country’s minimum wage. That successful coup and Zelaya’s continued exclusion from office have blown a chill wind across Latin America’s progressive movements and administrations, just as they were intended to do.
In the month of March alone, five journalists were murdered in Honduras while on 3 March Human Rights’ Watch wrote to the country’s Attorney General urging him to support a comprehensive investigation into a campaign of “killings, rape, torture, kidnapping and assault” that has been directed against members of the National Popular Resistance Front, a group which has resisted the ongoing coup.
It will suit many interests to ensure that the campaign of terror continues.