Use election to strengthen republican mandate for equality and unity 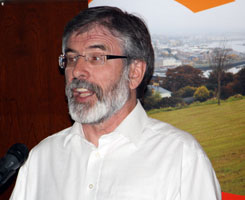 In the first of a series of public meetings across the Six Counties in the course of the Westminster General Election campaign, Sinn Féin President Gerry Adams addressed hundreds of people in Derry’s Guild Hall on Tuesday 13 April. He launched a scathing and detailed attack on the dire leadership and double standards of the SDLP and urged people to further strengthen the Sinn Féin mandate.  We carry here an edited version of Gerry Adams’s speech.

The public meeting in Derry’s Guild Hall on Tuesday