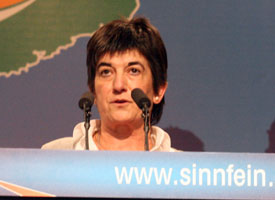 At the Sinn Féin Ard Fheis held last month in Dublin, Kattalina Madriagia, a pro-independence left former MP from the Basque Country, spoke to An Phoblacht’s EMMA CLANCY about the significance of the Basque Abertzale Left’s proposal for a democratic and peaceful process of political dialogue to begin.

Madriagia explained that for several years, a process has been unfolding among the Basque Abertzale Left of trying to break through the barriers put up by the Spanish and French states that have frustrated the development of the movement for Basque independence.
“In the past decade, the Abertzale Left movement, and Basque society in general, has experienced a surge in repression against us, in particular from the Spanish state forces,” Madriagia said.
“Successive Spanish governments have stepped up their efforts to criminalise and isolate the pro-independence movement within Basque society, and internationally.
“Today there are more than 750 Basque political prisoners, the highest number since the death of the fascist dictator General Franco in 1975. Torture in the prisons is widespread and well-documented. There is a wide array of repressive legislation in place that criminalises political parties, media outlets and cultural organisations.
“We face a major challenge of changing the current scenario and that is what the Abertzale Left’s proposal aims to do.”
Following months of discussion and debate, a large conference of Abertzale Left representatives, including from Batasuna, made a public statement in February stating their commitment to using “exclusively political and democratic means” to advance their political objectives – in which the democratic will of the Basque people would be respected “in a complete absence of violence and interference”.

Response
Madriagia told An Phoblacht that this proposal was highly significant and needed the active support of all sections of Basque society and international involvement to succeed.
“The proposal was received very well by the Basque people,” she said. “It was understood by Basque society, and supported by all the political parties and trade unions.
“But this need for active support for the proposal from the Basque people and the international community is all the more urgent since we have now seen the Spanish state’s response to the proposal, which is to opt for repression.”
Madriagia explained that the attacks on the leaders of the discussion process began before the document was even published. Eight high-profile left-wing political and labour leaders, including Batasuna leader Arnaldo Otegi, were arrested in October as a discussion paper was about to be published and charged with “trying to re-organise the leadership of Batasuna”.
“[In March] Arnaldo Otegi was sentenced to two years in jail for ‘glorifying terrorism’  –  on the basis of a speech he made at a rally in 2005 in which he compared a Basque political prisoner, who had been held in jail for 25 years, to Nelson Mandela. Otegi has also been banned from holding public office for 16 years.
“The Spanish state is clearly targeting those who are actively seeking a peaceful resolution to the conflict. ‘Securocrats’ fear a changed scenario and are determined to resist such change through repression. They want to avoid a united position developing among the Abertzale Left.”

International role
“We want to create a situation in which multi-party talks can take place, on the basis of the Mitchell Principles,” Madriagia said.
“International support for this process is crucial. After the process broke down in 2006, we maintained our relationship with the international actors. We hope that we can create a scenario whereby the international actors will facilitate a process of political dialogue.”
Madriagia said that she welcomed the response of solidarity from the Irish people to Basque ex-prisoner Inaki de Juana, who is fighting extradition to Spain from Belfast.
“Every time we are at the doors of a new process, the repression intensifies, and the extradition attempts against Basques around the world are part of this. These actions do not help the development of a peace process – they help maintain conflict.
“All international actors should take a pro-active position on this question of an opportunity for a peaceful process of conflict resolution, and not help put up obstacles.”
Madriagia said that there was a vital need for other EU countries to now put pressure on the Spanish government to end its strategy of trying to strangle and silence the Basque call for engagement.
“This is an important opportunity for progress that should not be wasted but we need to mobilise support internationally to achieve the construction of the new scenario envisioned in the Abertzale Left’s statement,” she said.
“We want to thank the Irish people and Sinn Féin for their historic and ongoing solidarity with our people and our struggle. We look to Ireland as a positive example of what dialogue can achieve and such a process can be built.”

‘Time for leadership’
On 16 March, ETA killed a French police officer in a shootout near Paris that resulted from a chance encounter between ETA members and police. The fatal shooting came days after the body of ex-prisoner and ETA member Jon Anza was found in a morgue in Toulouse. Anza’s disappearance in France last April is believed to have been caused by Spanish security forces, with the collaboration of the French security forces.
In a statement, the Abertzale Left said both cases showed the urgent need to build a new scenario in the Basque Country based on its initiative launched in February. The pro-independence left expressed sorrow for the policeman’s death and called on ETA and the Spanish and French states to make clear commitments to reviving the democratic process.
On 30 March a statement by international leaders, including former President of South Africa Frederick de Klerk, Archbishop Desmond Tutu, former Taoiseach Albert Reynolds and former Irish President Mary Robinson, was presented in the European Parliament commending the public commitment from the Basque Abertzale Left to using “exclusively political and democratic” means to attain its political goals.
The statement called on ETA to support a permanent ceasefire and for the Spanish government to respond positively to such a declaration.
Commenting on the publication of this statement, Sinn Féin President Gerry Adams said: “The conflict in the Basque country can only be resolved through political dialogue. It is clear from this statement that the international community want to help to create such a process.
“The Irish Peace Process has shown the world that previously intractable conflicts can be resolved. Sinn Féin actively supports an inclusive process in the Basque Country.
“It is now important that the opportunity presented by the political initiative taken by Abertzale Left and the positive statement from international leaders is grasped by both ETA and the Spanish government.
“Now is the time for decisive political leadership. It is the time for the rights of the Basque people to be recognised and for a genuine conflict resolution process to be put in place.”

TARGET: Arnaldo Otegi was sentenced to two years in jail for a speech he made at a rally in 2005