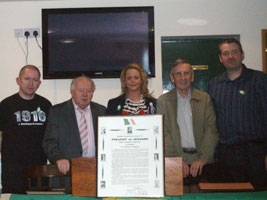 St. Michael’s Irish Centre was the venue on Sunday last for the launch of a local campaign to promote the wearing of the Easter Lily in recognition of the men and women volunteers who took part in the Easter Rising of 1916, and more importantly to raise awareness of the contribution made by members of the Liverpool Irish community who travelled to Dublin to take part in the fighting that week.
Among the notable speakers at the launch included lifetime Irish community activist, writer and GAA stalwart Tommy Walsh; Bernard Morgan, local historian and member of the Connolly Association, whose own mother took part in the Rising as a member of Cumann na mBan, Liverpool; and Jeff O’Carroll of Cairde Na hÉireann Liverpool. All speakers provided a personal reflection on the Rising and the importance of remembering and paying tribute to the sacrifices made by both women and men.
Neil Doolin, one of the organisers, stated:  “In launching this local campaign all speakers noted the fact that 2016 will mark the 100th anniversary of the Easter Rising. For ourselves in Cairde, this will be a very important event to mark both for us as a community in Liverpool and in terms of consciousness raising amongst our community on the part played by the volunteers who travelled from Liverpool to take part in the Rising and those who also took part the war for independence that occurred from 1919 to 1921.
“Our speakers today have shared much knowledge and information on the names of the individuals involved. It will be important over the next five years that some form of recognition is given to those women and men of our community who played their part in the struggle for Irish freedom. The onus will be on ourselves as a community that fitting tribute is made to their sacrifices. Raising the importance of wearing a Lily is a first step in this process”.
Easter Lilies are available from St Michael’s Irish Centre in Liverpool.
An Phoblacht
44 Parnell Sq.
Dublin 1
Ireland